The 10-minute animated African horror fable by instructors Miguel Ortega and Tran Ma - known as Half M.T. Studios - employed hand-drawn and cutting-edge 3D techniques, with tools like ZBrush and Maya for characters and Substance Painter for texturing, and was rendered exclusively in the game engine. 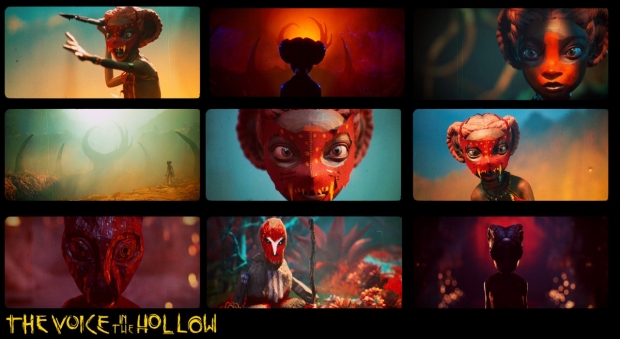 Miguel Ortega and Tran Ma’s The Voice in the Hollow is an animated African horror fable created by harnessing the power of Epic Games’ Unreal Engine. The real-time animation 10-minute short premiered in Hollywood last November with Brian Pohl, Technical Program Manager of Media & Entertainment and Academic Dean of the Unreal Fellowship at Epic Games, describing it as a “….masterpiece of real-time animation.”

Pohl further noted that the film is "Engaging, mesmerizing, and unquestionably indelible, [The Voice in the Hollow is] masterfully executed — and so impressively takes advantage of the rendering capabilities of Unreal Engine 5 — that one finds themselves in disbelief that this film was accomplished by such a small team using only a game engine.”

Produced by Ortega and Ma, otherwise known as Half M.T. Studios, The Voice in the Hollow was created using hand-drawn and cutting-edge 3D animation techniques. Unreal Engine has been helping studios forge new production paths by bringing real-time interactivity and collaboration to filmmaking and episodic TV. Halm M.T. Studio’s short is one of the first to embrace the challenge of rendering a 3D-animated film exclusively with a game engine, with results comparable to the quality expected of a world-class studio.

Pohl explained, “Tran Ma's artistic prowess is fully on display by creating a robust and wonderfully unique non-CG appearance for her characters and the world that they inhabit that rivals, if not exceeds, the production design of animated films with far greater budgets and staff. Miguel Ortega's attention to detail directing style and mastery of emotive subtlety impressively brings everything to life.” Created on the heels of Half M.T. Film’s award-winning short, The Ningyo, which told the tale of a search for a mythical Japanese creature, The Voice in the Hollow explores sisterhood, envy, and ancient evil, and despite its vivid use of color and imagery, it is not suitable for children.

According to Ortega, the film’s intentional Spaghetti Western aesthetic and softened renders were intentional, as the duo sought “to make a statement with this film.”

Continued Ortega, “The beautiful visuals and vibrant colors are simply a red herring for the dark tone the film ultimately delivers.”

Colombian-born Ortega and Vietnamese Ma cast their film using native African actors in Kenya and Tanzania. It was produced entirely in Swahili with supporting English subtitles, with voice actors resourcefully discovered from audiobook translators in Africa, and all recordings captured through Skype. Now rooted in Los Angeles as resident artists and instructors at Gnomon School in Hollywood, the filmmakers hired a local actor for the female mocap performances. At the same time, Ortega himself acted the movements required for male characters. A small team of artists and actors created the film.

Supporting Unreal Engine in their animation workflow, Ortega and Ma used industry-standard software ZBrush and Maya for the character design and creation, with character texturing handled with Adobe’s Substance Painter. Xsens’ Awinda suit and gloves helped provide the motion-capture performances. At the same time, MocapX captured the facial expressions, which were all later improved on by some of the film’s contributing animators using Maya. Environments were sculpted and textured in Gaea, the industry-popular terrain design tool for VFX, games, and virtual production, before being layered with Epic Games’ Megascans. Marvelous Designer achieved the most convincing fabrics and costumes for the design and simulation before being exported as Alembic caches into Unreal Engine 5. As instructors at Gnomon, the Hollywood-based industry-focused school of visual effects, games, and animation, it was important for Ortega and Ma to document the entire process of the film’s production, from the casting and sound, through the editing and visual effects production. As a result, over 100 hours of making-of footage has been recorded and is available for worldwide viewing to help other aspiring filmmakers learn from their thought processes and creative workflow.

Watch their entire filmmaking journey here – then watch the result of their efforts below:

"Miguel and Tran have created a beautiful film, and we're very proud of their accomplishment,” added Alex Alvarez, Founder & President at Gnomon School. “For ten months, they live-streamed their weekly progress, and it was a pleasure to watch the film come together. The end result is a testament to their passion and talent, while also an impressive case study on how Unreal Engine 5 empowers independent filmmakers."

Watch The Voice in The Hollow -- Unreal Engine Short: