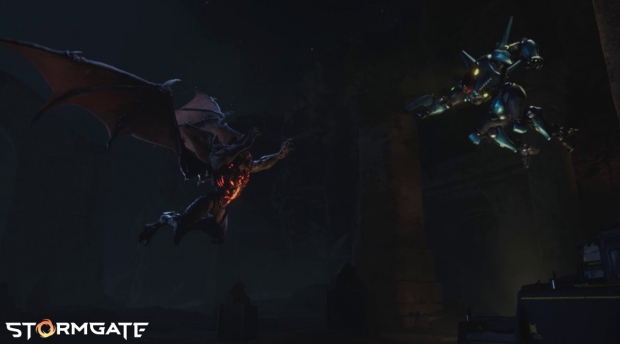 The highly anticipated RTS game teased a crumbling planetary landscape filled with treasures and foes as the player uncovers secrets to a long-abandoned past. The story begins hundreds of years in Earth’s future following the near extinction of humanity caused by the Infernals, an alien race hellbent on claiming this planet for their own. These otherworldly demons emerged from Stormgates, seemingly dormant portals that began pouring out demons during powerful solar storms. As the Infernals return to threaten humanity once again, humans must gather their courage—and climb into their 20-foot tall mechs—to save the world.

The launch campaign sets out to return players to the nostalgia of 1990s real-time strategy game franchises. To this end, Hamagami/Carroll, the design agency behind the Warcraft and StarCraft logos, was tapped to design the “classic” look for the new game. Jones collaborated with the Frost Giant team on co-writing the trailer’s script, then using the concept art they provided, Zoic proceeded to build the assets, crafting the spot entirely in Unreal Engine. The result was a cinematic trailer that further elevates this classic style while drawing audiences into the eerie dystopian world of Stormgate.

The trailer represents Zoic Studios’ approach to real-time filmmaking technology, which led to the company’s dedicated Real Time Group launch. Like the full game engine approach to the Stormgate trailer, the studio has also leveraged a Final Pixel approach in the VFX work for the AppleTV+ series For All Mankind Season 3.

Zodiac Studios, an Epic Mega-Grant recipient in 2020, has worked to refine a parallel pipeline for pre-rendered and real-time asset creation. They have used this approach on multiple series, including Warner Bros’ Superman & Lois and Stargirl, Apple TV+’s SEE, Prime Video’s The Boys, and the Netflix series Sweet Tooth.

Frost Giant Studios was founded in Southern California in 2020 by Tim Morten and Tim Campbell. The veteran game development leaders have helped create some of the most popular and best-selling PC games of all time and some of the most watched esports, including Blizzard Entertainment’s WarCraft III and StarCraft II.