With a 'snap,' Weta Digital helps brings closure to both Josh Brolin’s seemingly unstoppable villain and the foundational storyline from the MCU’s first 10 years. 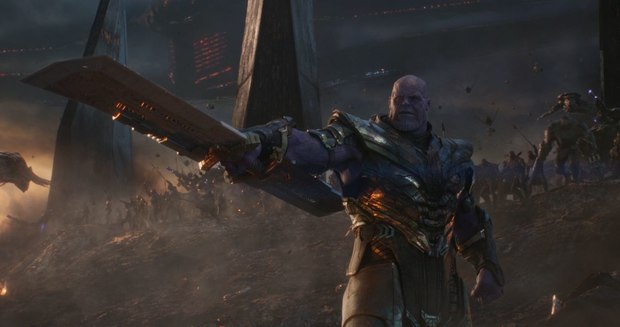 For Marvel’s smash superhero adventure, Avengers: Endgame, the harrowing story picks up where we left off with last year’s opening salvo in the Avenger’s two-part MCU climax, Avengers: Infinity War: Thanos, played to perfection by Josh Brolin, brings the entire universe to its knees, wiping out half of all life with the snap of his fingers. In Endgame, the Avengers manage to regroup and fight back, ultimately prevailing against their most insidious foe, but at a terrible, gut-wrenching cost.

The responsibility for translating Josh Brolin’s performance capture into the fully digital Thanos once again fell on Weta Digital, along with Digital Domain, as it had for Infinity War.  “We were happy with the way he turned out for Infinity War and were thrilled to have a chance to work with him again on Endgame,” Weta Digital VFX supervisor Matt Aitken shares.  “We always find ways to improve. There were a couple of shortcomings with his facial rig, particularly around the corner of the mouth, where we couldn’t completely achieve the range of expression we wanted.  We took the opportunity to get our facial modelers to work out how to increase the range of expression there.  We also had this new tool called Deep Shape, which allows us to add more fine details to the facial performance.  I like to think of it as another fine octave of detail in the face shapes.  You think of facial animation taking Thanos’ face from one expression to the next, but we’re not changing the shape of the face in either of those two endpoints. There’s an intermediate phase where we are looking at the tissue as it moves from one place to the next.  Not something you would necessarily recognize consciously, but it adds a more natural range of details to Thanos’ face shape and in doing so, adds to the believability of him as a character.”

The film features a younger version of Thanos, which had to be reflected in the fight choreography.  “The work of our animation team on this show was incredible,” Aitken remarks.  “Sometimes Josh Brolin and often times a stunt performer plays Thanos in specific fight sequences.  Thanos is massive… eight feet tall, and we have to craft that scale and power out of the performance of a five foot six or six-foot performer. There’s a keyframe animation component to all of the fighting, be it with Thanos or the digital doubles of Iron Man, Thor and Captain America.  There are digital doubles involved with their fight from beat to beat throughout.  Thanos is four years younger than in Infinity War because he has come forth from the past.  We didn’t de-age his face but reflected that increased power and ability in his performance.  He’s wearing armour, so in a way you would think that would constrain his performance. But, we were mindful of the fact that would be a terrible thing to do.  The armour as designed so he couldn’t even lift his arms away from his sides.  We were doing a lot of things behind the scenes to make his armor appear to be rigid but allow Thanos the full range of movement.” We have a fine tradition at Weta Digital with Iron Man going all the way back to The Avengers where we got him, Cap and Thor meeting for the first time and fighting with each other before they get on speaking terms,” Aitken reflects.  “Now we have the three of them walking up together to face Thanos, which bookends our involvement with Iron Man quite nicely.  In Infinity War, Iron Man had the bleeding edge nanotech suit that could reform itself and form weapons.  The Mark 85 suit in Endgame has retained that bleeding edge nanotech, but has more of a dull solid plated steel look that harkens back to some of the early suits.” Aitken goes on to describe how it was important to retain a sense of flexibility without making the armor suit appear to be rubbery. “We allocate a lot of the stretch to the grey areas and preserve the shape of the red and gold areas that will read more prominently. That fools the eye into thinking the suit is solid and rigid even while at the same time allowing Iron Man to be fully flexible in his performance.  That was crucial when towards the end of the fight scene it comes down to Iron Man and Thanos.”

Proper damage tracking was important to ensure continuity during the end battle sequence. “For Endgame, we had several progressions that we were tracking not only for Iron Man but also for Thanos, Spidey and Thor,” notes Aitken. “They all go through multiple stages of damage.  Iron Man goes through six different stages of damage in this film.  Our approach to that was we initially worked up those different looks with 2D concept art from our in-house concept art team and reviewed that with [Marvel Studios VFX supervisor] Dan DeLeeuw and the filmmakers at Marvel.  We weren’t working on the shot sequentially so we couldn’t work up to the point where the damage happens. Thanos whacks him on the chin and a big chunk of the suit’s material is blown away.  We had work on all of these shots simultaneously across the whole fight.  We needed to have a map for the damage progression right from the start.” While the damage tracking had to be exactly right with the characters, there was more freedom with the environmental destruction. According to Aitken, “We were taking all sorts of liberties with damage to the Avengers compound. As the battlefield for our end battle, it was nowhere near big enough to stage the story of our heroes collaborating to get the gauntlet, from where Hawkeye first emerges from the rubble all the way across to where the van sits with the Quantum Tunnel in the back. They spent the whole battle, which is over 30 minutes long, moving across this damaged compound crater. In just one small beat of action they would get across it but we were constantly redressing the compound and moving the action back.  It’s like you’re on a set and wheeling your dressing elements in and out.  We used our layout department to on the fly reconfigure the form of the compound.”

Atmospherics helped Weta convey the right size and scale. “We were making the crater seem bigger than it was with atmospherics, doing a lot of work rirect the audience’s eye to where it should go,” Aitken states. “A great example of that is the shot that occurs right when the two armies charge towards each other and clash.  There’s a flamboyant shot that starts wide and goes through all of these different armies and heroes clashing, then finishes on Iron Man and Rescue up in the sky blasting away in unison. That incorporates three different plate elements that come and go as the shot progresses.  Our animation department used character and camera animation to direct the eye because that shot could have easily been hard to look at. But, we were able to craft a legible shot.” Distinctive motions were also devised for the hero characters as well as the battling armies to make the characters distinguishable from each other.  “We’re imitating the way the characters move because the actors are adopting a performance style for these individual characters,” Aitken describes.  “The great thing is that there are so many previous movies to call on for these characters.”  An iconic moment during the end battle is referred to as the “Women of Marvel.”  “That was spectacular and opens with a shot that they got onset where they had every woman character who has ever appeared in MCU films,” he adds. “It was an amazing thing to be onset for.  The only person not there on the day was Tom Holland.  We shot with a stand-in and picked up Tom later on with some slow-motion control against greenscreen and tracked him into the plate handing off the gauntlet over to Captain Marvel.  The action that follows is the run of about 20 or 25 shots where we have Captain Marvel working to get the gauntlet into the Quantum Tunnel in the van and all of the other women of Marvel are supporting her and collaborating in different ways.”

“When the additional photography was being shot for the end battle in October 2018, the filmmakers still had two or three ideas about the way that scene could play out. So, they didn’t film a lot of it,” Aitken continues.  “We eventually got a call and a couple of paragraphs describing how the scene could playout in February 2019.  Usually that would go to their previs team but by that stage, The Third Floor had wrapped off the show.  So, our animators took that description of the action and worked it up into hero beats of fight choreography and fleshed out that scene.  We cut a version together, sent it over and was well-received.  Jeff Ford, the Marvel editor, did a pass and tightened it up.  That became our blueprint for what are essentially, almost all CG shots.  But that’s how come we could even consider pulling that scene together so late in the day.  That was fun to do.  We had Scarlett Witch choking a Leviathan and Valkyrie slicing a Leviathan that comes crashing down.  We got to collaborate on the storytelling to a degree that we don’t usually get to in these films.”

One of the most emotional and harrowing effects of both Infinity Wars and Endgame is what Aitken refers to as “The Blip.” A snap of the fingers. “The blip is the name we coined when Thanos does his snap and half of all the life in the universe turns to dust at the end of Infinity War,” Aitken explains. “We got to blip out a bunch of characters on Titan and worked out hero level effects simulation to achieve that. However, when we came to do Tony’s snap at the end of the Endgame battle, we had a whole army to blip out. That meant our hero simulations would be prohibitively slow to operate.  We came up with a more optimized version of the blip simulation technique, which worked great for the midground characters.  We still used our hero blip approach for the foreground.  In fact, Thanos’ blip is the most complex blip that we’ve ever run.  Frame by frame we were dynamically updating the colliders that were causing the wind to eddy around him and blow the flakes to reflect the current state of Thanos dissolving away. We worked on multiple versions of that blip.  I thought it was important that he should clear frame and we’re eventually looking at an empty battlefield. That’s how we clearly knew that Thanos was gone.” And after spending several years on the two-part Avengers: Infinity War and Endgame theatrical juggernaut, creating some of the most stunning and visually compelling VFX ever seen, to now watch the final film break almost every box office record in existence, Aitken concludes, “Endgame has succeeded beyond our wildest dreams.”