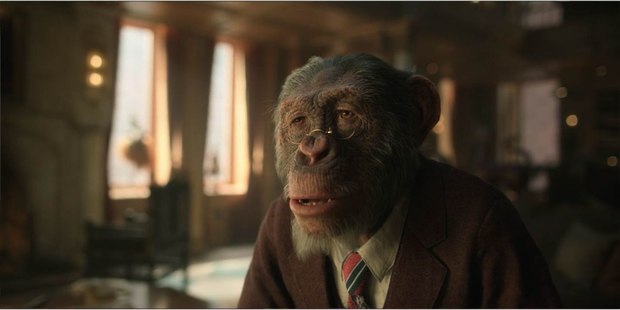 With its recent Season 2 pickup, the Netflix original dysfunctional, estranged superhero family adventure, or misadventure, series, The Umbrella Academy, will be back with more episodes, most probably in early 2020. The popular live-action series is based on Eisner award-winning comics and graphic novels of the same name created and written by Gerard Way (My Chemical Romance), illustrated by Gabriel Bá and published by Dark Horse Comics.

New Zealand’s Weta Digital, the masterful VFX studio behind some of the most sophisticated and stunning visual effects ever produced (superlatives and long list of blockbuster films left off for sake of brevity), has schooled the industry for years on how to produce believable, emotionally fulfilling digital character performances, going back to Gollum in The Lord of the Rings trilogy, and more recently, best exemplified by their primate character work on three Planet of the Apes movies. They brought the unrivaled excellence of Caesar to theatre-going audiences around the world, and now, for Netflix’s huge streaming audience, they’ve brought a brand new, emotionally nuanced and beautifully animated digital chimpanzee named Dr. Phinneus Pogo. Or, Pogo for short.

AWN recently had an opportunity to speak with Chris White, Weta’s VFX supervisor on the project, who shared his experiences on the production. Dan Sarto: What was your role on the project?

Chris White: So, I'm a VFX supervisor at Weta Digital. I've been here quite a while, maybe 15 years or so. Our work on the show specifically involved the character of Pogo. I came onto the project early on, working with overall VFX supervisor Everett Burrell and Steve Blackman [series showrunner] to discuss what they wanted with the character. Weta helped with some of Pogo’s art direction and design in addition to his production.

DS: In what ways did you draw upon Weta’s vast experience with digital characters, especially Caesar and the other digital primates you created for the three Planet of the Apes films?

CW: We definitely leveraged all of our history working on those type of characters, especially the Apes series. We approached this series pretty much exactly the same way we would approach any feature. The schedule was slightly different, so we made some modifications to accommodate for that. But, we took all that 10-plus years of Apes research and applied it to Pogo. So, for his modeling, hair, animation, all the details in his face, we took advantage of all that we had learned from those previous shows.

DS: Other than differences in production and delivery scheduling, how does TV VFX work differ from film VFX work?

CW: There is definitely a little bit of scheduling difference. Because we delivered on the episode, we had deadlines throughout the project so the production would have time to do sound and edit, even though they were delivering final episodes as a streamed bulk. We did modify our pipeline a bit so that all our departments could work in parallel. We were extremely efficient. As plates came in, we started lighting. An example would be, we started lighting Ken Hall, who plays Pogo on set, before we had finished animation. We were lighting him to get our lighting pipeline setup for those plates and those scenes. Then, as we worked on animation with Adam Godley's performance, getting animation finaled, we could have a good lighting baseline, so when the animation was done, it would drop in quickly. So, because of the episodic deliverables, we did end up making some changes to try and keep all the departments working in parallel.

That worked well for us. The lighters were starting to work on the next episode as the previous one was being finished up, and animation could start working, looking ahead. Otherwise, everything else was pretty much done the same as we would do on a feature film. Same type of approach. This show was also slightly different because we did have ADR from one actor that had to be applied to a character who was performed by a different actor on location. But, the approach to everything else was pretty much the same… same type of renders, comps and delivery. DS: Much of Weta’s innovation with digital characters has involved expanding your ability to capture performances in various extreme locations, with actors, for example, on horseback, in snow or misty forests. For Pogo, his performance took place primarily within the Umbrella Academy house and gardens. How was his character shot on set and how did you capture the performance?

CW: Though Pogo was shot primarily in the house, taking into consideration his original design and how we setup his lighting, shaders and textures, we rendered him in all the different home environments as well as outside in the courtyard, to make sure that he would work well in any of those different conditions. The one thing that was different with this project versus some of the other ones we’ve done was the performance capture process. Ken Hall worked with the actors on set, while Adam Godley would do Pogo’s performance for all the voiceover, facial capture and acting. Then we'd have to marry those two back here at Weta. Once we had the facial performance from Adam, we would, as needed, do a recapture of looking at his performance and modifying the body motion to work with what he was performing, such as certain head gestures and expressions. You couldn't have that body disconnected, so we would recapture there and then put together a full animation for Pogo.

The facial work we did with Adam was mostly keyframed, having him in the ADR suite. We had some good cameras on him and good reference for what he was doing. So, we used a little bit of a different animation pipeline, but had no real hiccups. It worked pretty well. Lighting and compositing to integrate him into the set was pretty crucial, of course, and our working in parallel, as I mentioned before, gave us time to do the small finessed beauty lighting that really helps sell his expression or action in a scene.

DS: Does final output for TV require the same level, and amount, of detail, such as the resolution of skin and hair, compared to a feature film?

CW: We treated it the same. We made sure to put enough detail into every little part of him. Also, because we had an idea of what the upcoming shooting would require, we wanted to make sure that he'd hold up to any kind of close-up. So, even down to his little glasses, we've got the tiniest little detail of the screws and other workings. Tons of fur work on his clothing. His clothing was very important and we wanted to make sure that it looked correct and real. We did use a new fabric model which we hadn't used before. It’s one of our newer advances, where we could simulate down to every little fiber on his jacket, shirts and pants, versus using texture maps. That worked really well because it gave us incredible amounts of detail. And it matched really well to the clothing we got from the costume department.

I guess we went a bit nuts with it because we didn’t know how close the camera was going to get. We tried to make sure we included enough detail for any instance. We showed everything to Everett and Steve, down to Pogo’s fingernails, feet, cane, everything. We didn't have to make any modifications throughout the production, which was great. He worked all the way through. We also made different versions of him for when he was 25 years younger. We modified his clothing… he had this kind of salt-and-pepper gray hair, so we made changes to make him look younger. But, other than that, his character worked from the first to the last episode. DS: Looking at the entire scope of your work, what were the biggest challenges that you and your team faced?

CW: The biggest challenge was some of the more difficult shots featuring Pogo interacting with the actors. There are scenes in the beginning, which were some of the first ones we received, where Pogo is hugging Vanya. Some of the compositing and integration between the two was a little bit more challenging. There were a number of little scenes along the same lines involving those types of interactions. He does things like hand keys to Allison. Compared to the human hands that were shot on set, ape hands are very different. The proportions are different, so there are little things you have to take into consideration when doing those types of shots. And having a history of having done that type of work, we could see immediately, from when a script would come in saying that Pogo picks up and hands something to someone, we knew we'd have to spend a little bit more time with those type of shots. And in the end sequence, which was him with Vanya, that was also quite challenging. There’s some effects work with him being lifted up in the air and other character dynamics.

DS: What appealed to you most about this project?

CW: It was a couple things. I mean, for one, it was the character of Pogo. Even with the early design, as new people were coming onto the show, they'd see first renders of him and be like, “Ooooh!” People were immediately drawn to him. They just liked the way he looked. I think that was part of it, too. Everyone immediately took to him easily, even in the early days. For me, personally, it was a really fun project, working with Everett and Steve. From the very beginning, they were open to our suggestions on little details and things that we could refine, having had such experience working with that type of character. So, just having that kind of collaboration with the client in the studio just made the project a lot of fun.

‘Natural Habitat Shorts’: Like ‘Ranger Rick,’ But for Adults
Framestore Sets Sail on ‘1899’ with New Virtual Production Tools
Animated Characters: The Art of Babbitt – Part 1
Bruce Smith and Ralph Farquhar Talk ‘The Proud Family: Louder and Prouder’ Season 2
VFX is the ‘Thing’ for Tom Turnbull on Tim Burton’s ‘Wednesday’
We Need to Chat
Choc Chip Animation Riffs on Pop Culture in ‘The Art of Murder’
F is for Flake: The (Not So) Great Animation Robbery?
END_OF_DOCUMENT_TOKEN_TO_BE_REPLACED