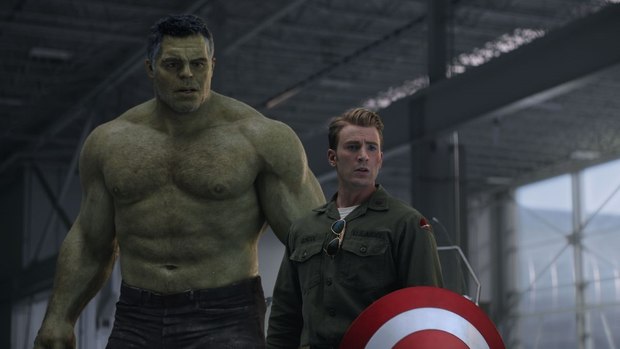 After more than 10 years and 22 films, Avengers: Endgame marks the end of an era for both Marvel Studios and Framestore. Having produced stunning visuals on 11 films in the build-up to this epic finale, the creative studio was excited to jump on board and tackle some key sequences and characters - ultimately delivering over 300 VFX shots on what seems likely to become the highest grossing feature film of all time.

Framestore was tasked with breathing life into a “Smart Hulk,” a never-seen-before Bruce Banner / Hulk hybrid. Balancing the human performance of Banner and the seismic power of the Hulk required a deft mix of cutting-edge technology and Framestore’s world-renowned animation expertise -- the result is a striking fully-CG character whose unique performance is loaded with human nuance, emotion and comedy.

To kick-start this process, a small Framestore team developed machine-learning technology needed to create a solve from source footage of Mark Ruffalo that would match in animation. “It was a way of convincing the client that we had the software that could do this quickly,” CG supervisor Robert Allman explains. The result was a first pass of animation that the filmmakers, Anthony and Joe Russo, could use to decide on the edit and begin the process of refining and adding face-shapes to use in the rig. Keyframe animation was then used on over 60 Smart Hulk shots, with head cam footage from the shoot used as reference. This performance was key for the animators on the film. Animation supervisor Max Solomon notes, “It was absolutely about channeling Bruce Banner. His face is very expressive. Every nuance, every little twitch and eye dart, slight curl of the lip and muscle tension needed to be translated.” According to VFX supervisor Stuart Penn, Smart Hulk’s facial build was particularly challenging. “There was a lot of work involved as their face shapes are so different - Hulk is massive, his mouth proportionally bigger, his eyes are sunken with deeper sockets. Tiny changes to his face had a huge effect on the performance.” A new subset of facial shapes was built to enable the animators to achieve more complex and nuanced expression and give them more control in the animation. The studio was also tasked with animating the digital character Rocket, the wise-talking raccoon that Framestore originated for Marvel Studios’ Guardians of the Galaxy, before upgrading him for Vol. 2 – he was made a little greyer around the muzzle, which required careful tweaking. “Changes had to be subtle as small tweaks could make him look like a completely different character or even animal,” Allman says. Rocket was treated to a new flight suit, complete with a dapper red scarf and goggles. “There was a lot of detail to the costume,” adds Penn, including “building the threads and adding a fine groom, right down to the texture of the bobbles of his scarf.”

In Endgame, the Avengers wear Quantum suits made of high-tech armored cloth and carbon fiber which they don to travel through the quantum realm. The actors had been shot in their individual outfits, so Framestore built digi-doubles before replacing the costumes on the 10 characters made up of an array of body types and proportions, ranging from Rocket and Black Widow to Nebula and Hulk. Based on concepts provided by Marvel Studios, the artists built a prototype suit for Captain America that was then adapted for each Avenger. These suits then had to manifest over each Avenger’s original outfits using the nanobot technology Framestore developed for Iron Man’s bleeding-edge Infinity War suit. Their helmets, based on Ant Man’s, also had to be built in CG and manifest in the same way over the actor’s face. “The helmet is a snug but mechanical design,” Allman states. “We used the nanobot tech to give the impression that it comes out of nowhere.” The team also applied their creativity on a series of mesmerizing quantum effects. Ant Man’s “Quantum van,” which first appears at the end of Marvel Studios’ Ant-Man and The Wasp, is revisited in Endgame as the Avengers test how it works. “We had to match the original effect and then amp it up as there’s a lot more going on,” Allman describes. “We had a lot more shots and see it from different angles.” Framestore built the whole model, based on scans from the original, combining comp, lighting and FX to achieve the desired look. 2D LookDev lead Tomas Lefebve used Nuke to get as close to the original look as possible before breaking it apart to decide on which elements needed 3D FX. Compositing supervisor Enrik Pavdeja says, “We worked up lots of optical FX in compositing; heat distortions, color breakup, aberrations and even our own blue plasma. We passed these pre-comps to lighting to create the interactive quantum plasma before FX.”

This effect is magnified with the build of the Quantum Gate, the Avengers’ time travel portal that features in 22 spellbinding shots. “We had a lot of freedom to work with the brief - in terms of its opticals, color and luminosity,” Allman shares. “The gate has a similar look to the van but needed to be much more geometry-based, integrating with the shrinking Avengers and FX.” “A lot of the view of the characters was from the top down and we had to show them not only shrinking but falling down in 3D space - quite a difficult thing to do in 2D,” Pavdeja adds. “We started to employ a lot more optical effects: time echoes, a few flares thrown in there, atmospherics, smoke, heat distortions, aberrations and some lens-tilt to achieve a marriage between foreground and background.” Framestore was also responsible for creating a number of complex CG environments, with the studio crafting much of the Avengers’ hangar base, replacing interior space greenscreen shot on location, as well as exterior views from the windows. The team then turned to an establishing shot of an environment which they knew intimately: Asgard. Having destroyed Thor’s home world in Marvel Studios’ Thor: Ragnarok, Framestore now had to piece it back together. “Our Asgard was synced into FX and the destruction we did for Ragnarok so the challenge was working out which version of what would be the one to use,” Allman describes. The sequence originally began with a shot of Odin's tower from over the mountains, which the team worked on for six months before a decision to switch to the more traditional front viewpoint was made. “Miraculously, we just switched the camera, rendered it and were surprised to discover that it actually worked,” Penn states. “It also made for a much better shot.”

Framestore delighted in being part of the creative team behind the visual effects of Avengers: Endgame, the epic conclusion to the first 22 films in the Marvel Cinematic Universe. From bringing Smart Hulk into the MCU, revisiting Rocket, building environments and futuristic FX, the film presented a variety of different challenges that the team relished.