Award-winning visual effects company creates a mysterious alien ship, its crash wreckage, and a dimensional window, all obviously engineered by beings not of this world, for the new sci-fi mystery series. 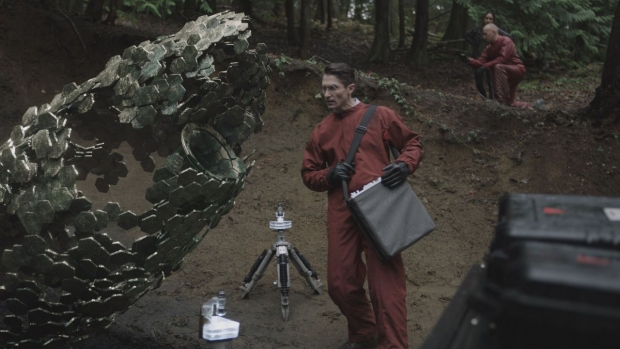 FuseFX has shared with AWN some of their visual effects work on the new sci-fi mystery series, Debris, which follows two agents investigating wreckage from an alien spacecraft that has strange and mysterious effects on humankind. The 13-episode first season is currently running on NBC.

One of the show’s main VFX elements is the alien ship and wreckage, its precision and awe-inspiring design that denotes superhuman engineering, and its creepy and mysterious nature that is key to the story. Another is an otherworldly, dimensional window seen in Episode 3, also key to the story.

With a team led by VFX supervisor Richard Greenwood, FuseFX contributed a variety of visual effects for the show. “One of our main contribution is the Debris Ship and its various components,” Greenwood shares. “Each episode has some interaction with a piece of the ship. We are either augmenting an existing set piece or creating something entirely from scratch. This process covers everything from the main ship design through to medium and smaller size Debris Ship pieces.” Work started pre-pandemic. At its largest, FuseFX’s team included 10 3D artists (trackers, modelers, animators, lighters) and 10 2D artists (concept, DMP, compers). “But” Greenwood notes, “there are so many others behind the scenes, from IT, to editorial, to production management who all have an important role to play in getting this show done.” Depending upon the scope of the asset, the team has turned around work, from concept to final, in anywhere from 7-30 days. The ship, and the hanger it sits in, took longer.

The Debris Ship design and believability are central to the story. “The ship is of unknown origin, but it's clear that whatever made it has a super-human intelligence,” Greenwood says. “So, the design must have an otherworldly precision to it. Nothing can look like it was man made. In addition to this, there's an obvious story thread of mystery and the unknown. Our designs often must take this into consideration. We can't reveal too much!”

“In addition,” he adds, “the hexagon plays a significant role in the design of the ship. We see this motif repeated over and over.” For Episode 3’s dimensional window, Greenwood and team began early, creating concept designs based on a single hero reference before moving on to some test footage to help lock down a shooting methodology. “We see the window at multiple times of day, and our lookdev process needed two streams, one for night and one for day, to proceed in tandem.”

“There were some key visual distinctions guiding the development,” Greenwood continues. “The figures behind the window needed to be unrecognizable - we needed to hide distinguishing characteristics like ears and long hair - and it needed to be unclear whether they were fully human. In some cases, these two goals competed against each other. With bald heads and form-fitting outfits, it's hard to avoid the alien read of the humanoid figures.” In addition, the figures needed to become hazier the farther they were from the window. “This note posed the biggest challenge because we had to develop a way to create a depth matte relative to the window,” Greenwood reveals. “For locked-off and nodal cameras, we used articulate roto to create the depth mattes and for shots with camera moves, we 3D match-moved our actors and generated the depth mattes in lighting.”

The episode’s most complex shot involved the character of Bryan (Jonathan Tucker). According to Greenwood, “Our most complex shot sees Bryan walk around the window. It's here that we get a read that it's paper thin and both sides look the same. We had a rough motion control rig on set and received 4 passes: the foreground plate, clean plate, an A side bluescreen background, and B side bluescreen background. In the latter, we had our ‘shadow figures’ in black. Piecing these all together required temporally and spatially lining up the cameras to account for the minor offsets. In the end, we had to add some custom animation on the characters to get these in matching continuity.”

“One of the visual themes we see throughout the show is animated chromatic aberration,” he adds. “And the window was no different. The effect gives a sense of an object being out of phase with reality, like it has movement while being still. It has contributed to the otherworldliness of all the Debris Ship elements too.” The biggest challenges for the team were the schedule, the otherworldly designs, and at least initially, the pandemic. “Each episode has about a 2-week schedule, and often episodes stack on top of each other,” Greenwood describes. “But we have an amazing team helping us to plan, resource, and push through some exciting work in a short amount of time. Developing a look that is not-human is also challenging, as it's hard to concept in new ways because so much of our natural visual language is learned through exposure. No one has seen a Debris ship before!”

While noting that COVID-19 posed a unique roadblock early on, Greenwood says productions in Vancouver (and elsewhere) have been swift to adapt. “In the early days of the pandemic, film sets were some of the safest places to work! Overall FuseFX was amazingly fast at adapting to a work-from-home model. Within a week, our IT staff had us up and running.”

He continues, “Of course, for many artists, the pandemic has removed some stressors and added new ones. I think many of us are happy without the commute, but we are now doing double-duty as employees and family members at the same time. The discussions around work-life balance are still at play, but it's even more imperative now that it's so easy to continue working that we help our team draw boundaries. Social isolation now contributes more to our lives than it ever has before, and we are doing our best to maintain healthy unscripted conversations often. Resourcing talent has on the one hand been easier as production was slow, but studios will need to begin to consider supporting a long-term work-from-home model to remain competitive.”

Reflecting on his team’s work, Greenwood concludes, “So far, this project has been rewarding in two ways. We've been fortunate enough to engage some of our creative minds to design beautiful and mysterious imagery. It's also been an opportunity to build on some lasting relationships and gain some new friends along the way.”