Led by VFX supervisor Aldo Ruggiero, the visual effects studio helped recreate the signature barbershop storefront, a library, and other New York environments that couldn’t be shot due to the pandemic, in Eddie Murphy’s ‘Coming to America’ sequel now streaming on Amazon Prime. 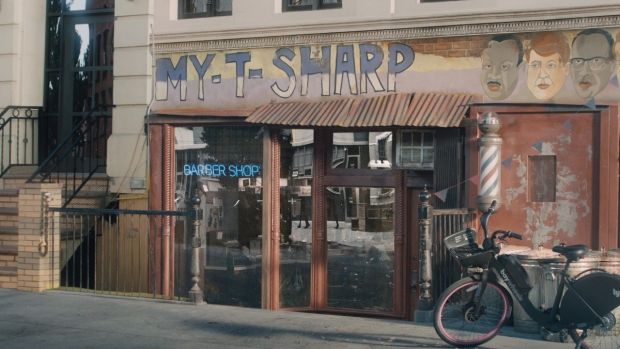 VFX studio Crafty Apes has shared with AWN some of their recent work on Amazon Prime’s Coming 2 America, Eddie Murphy’s sequel to his 1988 hit, Coming to America.  In a continuation of the events of the first film, former Prince Akeem Joffer (Murphy) is set to become King of Zamunda but discovers a son (Jermaine Fowler) he never knew he had in America. To fulfill his dying father’s (James Earl Jones) wish that his son become the crown prince, Akeem, and his aide, Semmi (Arsenio Hall), go to America again.

Founded by Chris LeDoux, Tim LeDoux, and Jason Stanford, Crafty Apes launched in Culver City, California, before expanding to Atlanta, New York, Albuquerque, Vancouver, and Baton Rouge. Past projects include films such as La La Land, The Little Things, Jumanji: The Next Level, Mulan, and Dolemite Is My Name, as well as TV shows such as Lovecraft Country, Stranger Things, and the CBS All Access Star Trek franchise.

Led by senior VFX supervisor Aldo Ruggiero, Crafty Apes was one of three VFX vendors who worked on the film. “That first phone call felt a lot like a job interview,” Ruggiero admits. “We went through every shot slated for visual effects with Jon Farhat, the film’s Oscar-winning main VFX on-set and post supervisor. It was nerve wracking because there was a lot at stake, and you could feel the weight and importance of it in the air. This all happened before COVID-19, when films still had plans for production to shoot principal photography and then go back to pick up background plates with a 2nd unit.”

“Then the pandemic hit, and no background plates were shot for some key scenes,” he continues. “New York was closed, and riots were happening. Crafty Apes was given the responsibility of recreating the library behind Baba, to create a background behind the window of the barber shop (initially slated to be shot by the 2nd unit), the barber shop storefront and, towards the end of the show, to help finish the movie with more miscellaneous work.” According to Ruggiero, the film’s on set supervision was “spotless,” with plentiful data and scans. “The multiple characters Eddie Murphy plays in the barber shop were shot with motion control rigs and went in easily, the Baba library environment was scanned, and while we did not have production takes to put behind him, we used the high dynamic range photos and data to rebuild it.”

Making photographs look like a production take and cutting them seamlessly with the same environment proved challenging, but feasible. “The New York scenes were not as easy, as COVID shattered any hope to shoot something for the exteriors and backgrounds,” Ruggiero explains. “The only thing we had were pictures from the scouting. When you scout a location, you’re a bit loose, never thinking what you’re doing might end up having to be used for a final product. So, in an otherwise perfectly planned movie, we ended up having to figure out how to recreate a New York corner with whatever means necessary, keeping an eye on budget at the same time.”

While there are never unlimited amounts of time or budget on even the largest films, Ruggiero feels Crafty Apes excels at “mastering the ability to create something photoreal within the boundaries of budget and time.” “There is a very simple equation to all this,” he says. “Those 11 special herbs and spices used to get something like this done boil down to pure grit, trial and error, and the talent of creative people getting on the same page through video calls from all over North America trying to solve one problem at a time, every day, until everything is done.” That said, the work was challenging. “The New York backgrounds for the barber shop, the store front, and the corner of the now gentrified Queens were some of our biggest challenges on the show,” the VFX supervisor concedes. “We looked at every picture available, and on top of that added our own flavors to the pot. There is actually an original address of where the barber shop is located in Brooklyn, and while the area is clean and modern, we found that we needed to add more of a gentrified look, so back to the drawing board!”

Ruggiero had to consider what cars to add, what people would look like while walking by, what other stores would be adjacent, what is the median income of the people living there, are they single or with families, and should there be an indie theater or a coffee shop? “We asked ourselves all types of questions about the environment,” he says. “I imagine our approach was similar to the way an actor might approach a character in any production. The fact that we can make something photoreal is very much a given nowadays, and we knew we had enough time to iterate and tweak creatively before time was up.”

Ruggiero concludes by admitting his team even had time to add a few Easter eggs. “The most obvious one is the LeDoux patisserie, a little tribute to the founders of Crafty Apes.”