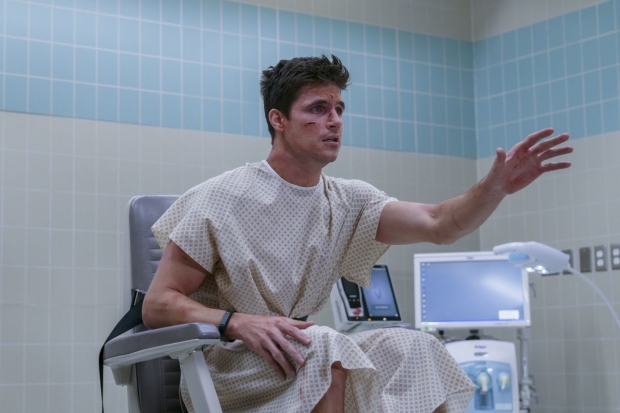 Ever wondered where we all go when we die? Now we can choose! From Emmy-Award-winning writer Greg Daniels (The Office, Parks and Recreation) comes Amazon’s Upload, a new sci-fi comedy series set in a technologically advanced future where hologram phones, 3D food printers, and automated grocery stores are the norm. Most uniquely, humans can choose to be “uploaded” into a preferred virtual afterlife when they find themselves near-death. The series follows a young app developer, Nathan Brown (Robbie Amell), who winds up in the hospital and has to quickly decide his fate. He chooses to be uploaded, and soon meets his customer service “Angel” Nora Anthony (Andy Allo), who quickly becomes his friend and confidante. Marshall Krasser, the overall production VFX supervisor on the show, managed an aggressive visual effects schedule that included 1,400 shots across the 10 episodes (almost 25 minutes of VFX work in the pilot alone).

Krasser worked at Industrial Light & Magic for almost 19 years in San Francisco and Singapore; over the past eight years, he has supervised VFX for ScanlineVFX, Prime Focus World, Psyop Film & Television, CoSA VFX, before landing at FuseFX. He’s won two VES Awards for his work on War of the Worlds, and was a 2015 nominee for his work on Divergent.

Speaking about his responsibilities on the series, Krasser says, “On Upload, FuseFX was involved in the early stages after it was picked up as a series by Amazon. It was determined that this would be a Vancouver-based show, and I was tapped to be the full show VFX supervisor. This included all pre-production meetings and planning, on set supervision, and the final in-house supervision at FuseFX-Vancouver. In production meetings, we would run through the script(s) with the showrunner, producers, episode director, 1st AD, and all heads of departments. As we went through this process, we would determine the approaches to take on each aspect of the episode. We would also have separate meetings with special effects, stunts, and visual effects to determine what pieces should be done where. Having an on set presence [almost daily] during the shooting of episodes 102-110, was the ideal way to work with Greg and the team to determine the best approaches to setting up the VFX scenes. This was a perfect approach, since final shooting decisions needed to be made after the shot was lensed and rehearsed. We worked closely with Greg, the episode director, and the DOP to cover all of the bases.”

Before FuseFX stepped in, there had already been some VFX produced for the pilot, but, “it was decided that [they] would recreate all of the visual effects to provide a consistent look and quality across all episodes.” This actually worked out better for everyone. “Greg had wanted to be able to tune and polish the VFX that was in there initially,” Krasser states. “By using the pilot as a high-level animatic, we could quickly advance the work to the next level.”

Reflecting on the volume and complexity of the work, Krasser comments, “For FuseFX, Upload was a perfect project for us to showcase the diversity of talent we have as a company. The variety of VFX work was a great creative challenge for us to tackle.” Detailing one particularly difficult sequence, Krasser explains, “In the AI car freeway sequence, we initially looked at using traditional exterior driving plates for the backgrounds. But with the need for total control of our driving path and needing only future cars, we took the route of a complete exterior recreation. The only non-CGI generated element is the far background hills. Rav Brar, our CG Supervisor, led the lookdev and build team for the freeway ‘set.’ Then it went to our animator Adam Chaput, who hand-animated them when needed. The others were repositioned as needed by Asim Khan, who was the key lighter on the sequence. Then the final patina was added in the comp - primarily by Ben Funk. It was a significant team effort on this one for sure. By having total control of this sequence, it was a perfect way for us to manipulate all aspects of the scene from light direction, smog levels, 3D tree foliage, car reflections and glints, future buildings, and signage. And not to mention the SCHP Drone we added into the mix. A fun, yet challenging sequence due to the amount of detail required to make it photoreal.”

“We had around 120 shots in the ‘Blue Room,’ as we called it,” he continues. “We built two identical rooms and sets - one ‘real,’ while the other room and its contents were all clad in bluescreen paint. To define the edges, the objects were greenscreen-taped around the parameter. Back at FuseFX, we added the selected footage to create the ‘IR’ look developed by Irina Berdyanskaya, one of our lead compositors, for a unique sequence.”

Another challenging and fun sequence from a later episode was where there was an issue and the more data-intensive parts of the "Upload" world were forced into low poly representations. “We used the actors’ performances for a guide and hand-animated our CGI characters to catch the intent of the action,” Krasser describes. “We had DMP [digital matter painting] work spread throughout the episodes as well. One place we used it a lot was in the NYC establishment scenes. Since Upload is set in the future, we researched and found the ‘official’ NYC city future planning guide. Using this, we were able to determine the positions, look, and heights of the proposed skyline changes. We will see in a few years if we matched it.” Touching more on the comedic tone of the series and how that affected the VFX work, Krasser shares that “Greg wanted all of the visual effects to be grounded in reality. But at the same time, they needed to introduce elements in the ‘Digital Afterlife World’ that hinted of being just that - reality based, digital, but just a ‘little’ off. He was very clear with his vision and the role that VFX has to have in a comedy; it's there to assist in the narrative, not be the narrative. Having worked on Galaxy Quest years ago, I reassured him I did understand the role VFX needed to play. It must be there to support and tell the story when needed, and add any comedic moments when called upon.”

FuseFX’s weren’t the only hands in the VFX pot. “There were a few additional shots that did not require Fuse's level of expertise, and these were handled by a studio post-production team in LA, spearheaded by Jeff Olney,” Krasser says. “Greg took an active role in all of the episodes to make sure they were keeping with his vision. I worked closely with the episodic directors to make sure they could get the vision that was required. Not all of them had been involved with VFX heavy shows, so my role was to assist, support, and guide them through the VFX work.”

Turning to the challenges of such an ambitious project, Krasser admits, “The biggest challenge was the sheer number and diversity of the overall VFX needs of the show. The show ran the gauntlet of VFX work, and having a solid team at FuseFX is what allowed us to meet these challenges head-on and deliver a highly polished and executed vision for Greg and the Upload team.”