VFX house One of Us worked through the COVID-19 pandemic to deliver 350 shots on Netflix’s wildly popular period romance drama set in an alternate Regency-era universe. 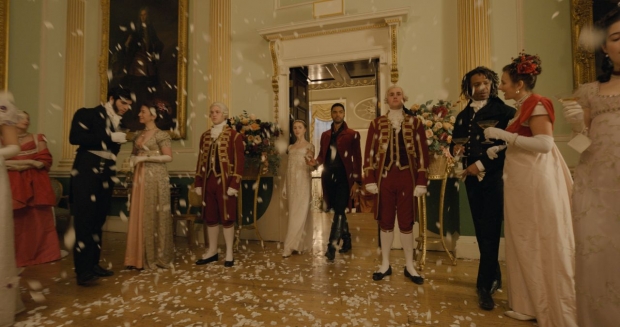 In 2017, Netflix made news by signing high-profile television producer and screenwriter Shonda Rhimes (Grey’s Anatomy) to a multi-year $100 million contract; the wildly popular Bridgerton is the first project to emerge from the partnership.  Created by Chris Van Dusen, the period romance drama is based on the novels by Julia Quinn and takes place in an alternate universe where 19th century British high society is racially mixed.  London-based VFX house One of Us delivered 350 shots for the eight-episode first season, which has been streamed by more than 82 million households.

Just as the UK first went into lockdown because of the COVID-19 pandemic, One of Us received its first shot turnover for the project. “Our Bridgerton team was always in constant communication with each other with daily virtual meetings and catch ups, cineSync dailies, and other types of one-on-one reviews,” One of Us VFX supervisor Victor Tomi says. “Once certain restrictions were lifted, our supervising and production teams would also have frequent reviews at the office, to make sure the work would also get approved on a 4K screen before sending any finals to the client.”

“It was definitely a challenge to run a full TV VFX project during the pandemic, not only because of technical obstacles, but also everyone’s personal struggles coping with this difficult health crisis,” Tomi continues. “We took extra care in making every person on the team feel comfortable and supported.”

Van Dusen envisioned his story centered in a lavish and luxurious world.  “Although our main focus was building an environment that would reflect Regency-era London, we also had to enhance the deluxe version depicted in the show through art direction and costumes,” notes Tomi.  “More specifically, Chris would have certain requests depending on what each location needed to fit into this world. For example, the CG ivy we were asked to add to the Bridgerton House, or extra embellishments on the Featherington House facade. In general, these were features that helped elevate the grandness captured on camera.”

Previs proved an important tool in helping figure out camera placements. According to Tomi, “The two principal families in the show are meant to live opposite each other in the same square. But the two houses were shot in locations that are miles apart. One of our main tasks was to create a full CG environment for the square where they would be brought together. It was important to create previs so that the director and DP had a clear view of how the surrounding houses would appear in the final look.”

“Our main technical development was the creation of a Houdini crowd tool that we could use in the numerous city environment shots throughout the show,” Tomi explains.  “We created full CG aerial shots of London and Mayfair that needed to be filled with life, plus various green screens that were replaced with street extensions. Our tool would scatter different agents across the environment: walkers, standing crowds, horses, and carriages; each would have their own set of animation cycles, costumes, and props. These were designed from a library of references taken onset, not only to achieve the correct look and style, but also to generate replicas of certain carriages or footmen uniforms in order to place specific families and characters in a shot.” The biggest challenge was creating wide, realistic, full CG shots from scratch.  “There is a lot going on in the frame, and you have to pay attention to every detail, from the texture of a rooftop to the animation of a horse,” Tomi shares.

An extensive collection of Georgian period architectural references was provided by the production art department.  “Those references were used to make sure that every detail in each house we built was accurate to that time,” Tomi adds.  “While shooting on location, we made sure to take photographs and LiDAR scans of the many buildings shown in camera, from which we could grab certain elements to develop our CG assets. There were also a number of specific real buildings that we had to replicate, including the exteriors of St James and Buckingham Palace [then ‘House’] or the interior of Somerset Gallery. For these we researched illustrations of what they looked like in the early 1800s. But we had a certain degree of freedom to adapt them in order to serve the look of the scene or to help the audience recognise them.”

Location photography lasted four and a half months, while two months were spent shooting on a soundstage.  “Carriage interiors were shot against greenscreen, plus other elements like boats, horses, crowd sprites or other pickups that needed to be shot,” Tomi says.

Creating a period accurate city environment required a major asset building effort by Tomi’s team. “We used an early 1800s London map as a guide for layout and brought this into Maya, scaling it to establish where the streets would go,” he reveals. “30 different house models were built and scattered through a mesh with individual planes to represent building blocks. For our square or other specific locations, we hand placed each building, especially in areas where they were going to be closer to camera. But behind that, we went for a scattering technique; it kept our city light, since we only referenced it once in each individual asset, which is easier for Maya to handle.  We modelled a set of urban furniture like benches and lampposts as well as different types of trees.  We also did shop fronts, market stalls, and church spires. For some of the street props, we drew curves to scatter the elements along them, like, for instance, placing lampposts along a road or a path.”

Tomi continues, “We could place the camera in different locations inside the city asset to either produce a full CG shot, or to bring that city as a background for a plate that needed a city extension.” CG renders were augmented by the matte painting department to make them even more realistic.  “It could be adding texturing for certain areas that were more visible on a certain angle, or details like dirtiness on a rooftop or curtains on a window,” Tomi details. “A lot of the work in comp involved enhancing the direction of the lighting and mood of the shots, using different light passes and mattes to work on the shape of the lighting and the environment. Extra care was needed when introducing the layers of DMP textures and elements to not break the CG passes and still keep our ability to adjust the lighting and shader levels. Finally, layers of small details like glistening cobblestone, puddles of water, window curtains or additional greenscreen crowds were added in comp to bring more life and complexity to the shots. We also used a library of house interiors that were projected inside of each house. Having a mix of digital crowds and 2D sprites helped final the shots as well.”

In the show, CG insects provide significant symbolism. “The Bridgerton family is always associated with a bumblebee, a detail that readers of the books the show is based on will recognise,” observes Tomi.  “We were asked to create this character and place it in various shots across the series. We wanted it to look realistic but also not feel too menacing, so we made sure it had some comforting features, like a fluffy fur and pleasant looking colors.”

Asset work on the show began in December 2019, with post-production running from March 2020 through October 2020.  “We had a lot of fun working on Bridgerton,” Tomi concludes. “Although we were dealing with a large amount of work, we are all proud of the result, and glad to hear about the success of the show.”