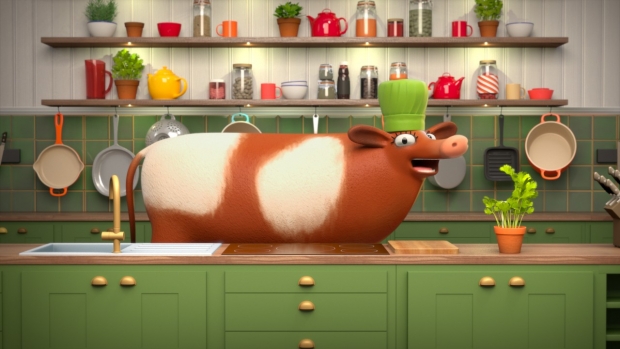 Studio AKA recently worked on a campaign to create awareness of food poverty with the advertising agency Logictomagic, for U.S.-based non-profit organization, Climate Healers – the studio’s second collaboration with the non-profit. Helmed by creative director Carl Le Blond and directed by Kristian Andrews, the sequel promotes World Food Healers Day, November 19, a day millions of people in food poverty will be fed a nutritious plant-based meal by the charity and its affiliates.

The campaign focuses on issues of climate change, or “climate catastrophe,” as it is referred to in the campaign, along with its subsequent issue - Food Poverty. Tasked with crafting a message to communicate “Food Poverty as an issue exacerbated by both Climate Change and large-scale Animal Agriculture,” creative director Le Blond resurrected Vega and her friendly posse of livestock, stars of the initial 2021 campaign.

The 60-second short Food Healers stars Vega (the cow) hosting her own TV cooking show on a mission to teach us how to feed the world sustainably.

“It felt amazing to once again work on something with a message I passionately believe in, however uncomfortable that message might be for some to accept,” shared Andrews. “Solving the climate crisis can just seem too complicated; however, when it comes to absolving some of your personal responsibility, the answer is simple: GO VEGAN!”

The project was born from drawings created on paper with storyboarding and previs done with the Adobe Suite. Next, the modeling and character animation was created in Maya, with Houdini used for liquid and gas simulation. Finally, the composited scenes were finished in Nuke, using Avid for editing. Every process contributed to a colorful finish. There are even tiny moments of 2D cel animation on the characters’ faces and liquid effects. AKA Studio’s 3D team was led by James Gaillard, with Daniel Garnerone as the CGI supervisor, who also took lead on rendering and compositing. Lucas Vigroux was lead character animator. Jerome Ferra modeled a TV set down to the last behind-the-scenes lighting rigs and scaffolds. Joshua Crew worked with the texturing and rendering crew, and Vincent Husset, the studio’s resident simulation expert, simulated a delicious-looking stew and worked his magic on the voluminous methane emissions of our bovine heroine! Adam Avery modeled and rigged all the characters. Producer Lara Salam managed the process on the client side as well as guided Studio AKA’s in-house creatives.

Here's a very cool behind-the-scenes look at the project’s evolution from initial conceptual drawings through the various steps to create the finished short: