Working with a team of six artists, director Steve Small employs a combination of 3D, rotoscope and hand-drawn artwork for the haunting, elegant main titles serving as the backstory for the HBO Max sci-fi series. 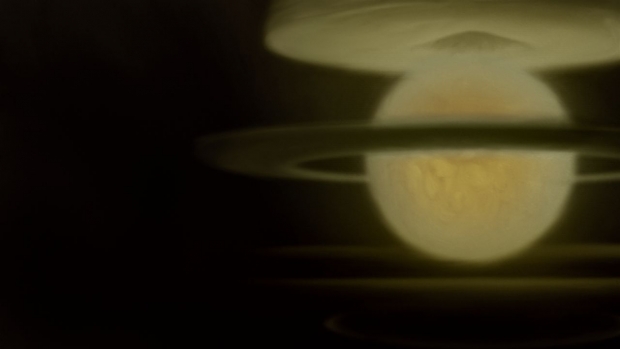 The sci-fi series, which centers on two androids tasked with raising human children on a mysterious, untouched planet, evokes Scott’s trademark “hushed grandiosity,” according to New York Times reviewer Mike Hale. It opens with a haunting and elegant animated main title sequence produced by London-based Studio AKA that serves as the backstory for the primary action, depicting the destruction of Earth and subsequent departure of any remaining life fleeing the planet to find refuge elsewhere in the solar system. Director Steven Small designed intricately hand-rendered shots for the 60-second title sequence using a combination of 3D, rotoscope, and hand-drawn artwork to create the captivating scenes of chaos and destruction:

Small completed the project over the course of three-and-a-half months alongside producer Nikki Kefford-White and a small crew of six artists. “This was the first time we’d worked with Ridley Scott,” Small notes. “He had liked some previous work we had produced for Black Earth Rising, and on seeing more of our work at AKA, invited us to pitch on a title sequence for his new series, Raised By Wolves.”

Studio AKA consulted directly with Scott on the designs for the sequence, often via telephone as well as in person. “He is direct and clear about his ideas, and also has the knack of planting strong seeds where an idea needs time to grow and to be explored further,” Small recounts. “He was involved in each of the stages, overseeing early conceptual design, animation, right up to finessing and finishing. This meant that we could offer up ideas and work him in a collaborative way. He has an incredibly well-stocked creative lexicon to draw upon as well as a keen eye for something new and left field, keeping the creative process robust, maneuverable and reflexive throughout.”

Studio AKA was given scripts to read and was asked to submit ideas for a title sequence that would represent the themes and introduce the story. “We put forward a few suggestions and when he found a route that he liked, we worked together to create a story sequence for the titles that reflected the emphasis of the design concept stills we’d made as well as hinting to aspects of the series storyline,” Small details. “His direction would vary from penciled storyboards to working over sketches and concept work, or else discussing concepts in person.” Despite the overwhelming devastation that propels the narrative, Small points to “a slender line of hope” present throughout series creator Aaron Guzikowski’s story. “We choose to create dark imagery in which hope was barely discernible,” he says, adding that the score created by Mariam Wallentin and Ben Frost provided “an emotional core of humanity and hope” that operated “both in contrast and yet in parallel to our animation.” Asked about specific influences for the sequence designs, Small says, “There was something in the story that examines the friction between technology and humanity. It suggested that with every technological move, forward there is always an indelible mark of humanity’s history present,” going on to explain, “This made me recall the early days of photography, where the subject manner frequently provided glimpses of a fast evolving world or a tableaux of pioneering spirit captured via the then-cutting edge of technology. However, the process was in such early days that the results had much of the human hand in it, so that they often looked more like paintings. I liked this state of flux and tried to see if I could bring a similar feel to the designs.”

The Studio AKA team employed Adobe Animate for line and line test animation, along with Maya, Houdini and After Effects for reference animation in some of the more complex set pieces. Photoshop was utilized to create all the artwork, as well as for animation and painting, with compositing completed inside After Effects, and Avid used for editing. “In order to create this particular style of animation and look, the technique has several pairs of hands on it throughout its process,” Small notes. “Whilst at some stage the imagery was generated via hand-animated material or CGI software, the final image involved hand animating and artworking every frame using digital brushes in Photoshop, which meant that several parts of the actual animation itself was also done by hand during the artworking phase,” he continues.

“Whereas final animation can often look a lot different to pre-production art, in this case, the early designs — including their painterliness and stylized techniques — became the final blueprint too,” Small concludes. “The only differences in the initial black-and-white designs and the final animation are the tints of color here and there. Every glitch and every stroke seen in the original designs remained in the final artwork.”