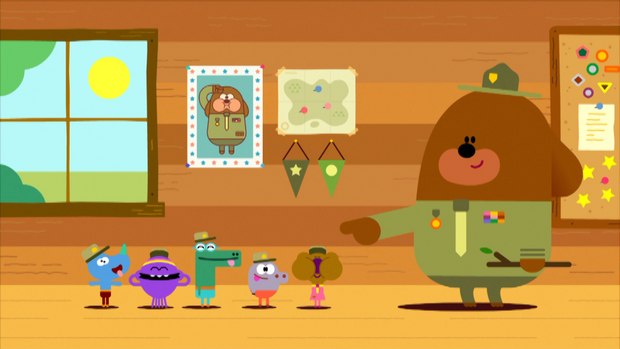 STUDIO AKA announced that it has wrapped production on the first season of Hey Duggee!, the company’s first original preschool series created for Cbeebies and BBC Worldwide.

Created and directed by Studio AKA’s BAFTA-winning and Oscar-nominated director Grant Orchard (A Morning Stroll), Hey Duggee! is based around The Squirrel Club -- an adventure club run by a big friendly dog called Duggee -- where kids take part in all kinds of activities and earn activity badges along the way. The club consists of five members (collectively known as The Squirrels): Tag the Rhino, Betty the Octopus, Roly the Hippo, Happy the Crocodile and Norrie the mouse. The show is a place for children (and their parents) to have fun, be energetic, and most of all to do things. Duggee teaches kids about being responsible, working as a team, taking acceptable risks and, most importantly, having fun.

Orchard conceived of the show while thinking about all the things he loved doing as a child -- mostly hands on, outdoor activities -- and how he was now doing them all over again with his own children. Studio AKA developed the project in-house for two years before submitting it to Cartoon Forum in order to source funding.

Produced entirely at Studio AKA, the playful series features an outstanding voice cast of kids in the main roles, each with their own unique personality, while Duggee speaks the universal language of “Woof!” Acclaimed comedian Alexander Armstrong lends his voice as the narrator of the series.

The new series doesn’t launch until January, but U.K. residents can watch the Christmas special The Tinsel Bridge now on BBC iPlayer. Check out the trailer for the series in the player below: