MPC's Visual Effects are Out of This World on ‘Ad Astra’ 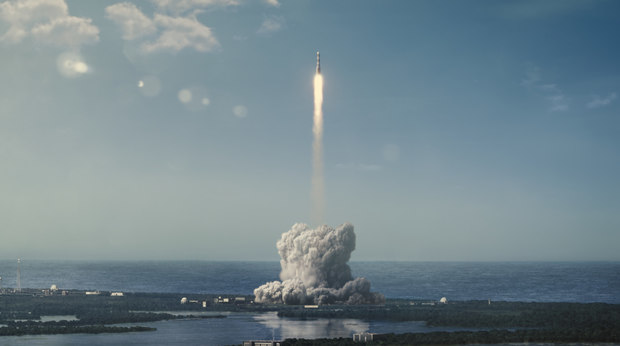 Now in theatres, Twentieth Century Fox and New Regency’s Ad Astra is an outer space thriller set in a not too distant future where the success of a dangerous journey involving the Moon, Mars and our nearby solar system impacts humanity’s chance for survival. The film follows Major Roy McBride (Brad Pitt), an accomplished astronaut overshadowed by his legendary father, H. Clifford McBride (Tommy Lee Jones) who disappeared more than 30 years ago on a doomed space expedition to Neptune. When a mysterious energy pulse originating from that planet hits Earth with devastating results, McBride sets out to find the truth about his missing father, who apparently may still be alive.  The film is directed by James Gray alongside Academy Award-nominated cinematographer Hoyte Van Hoytema and visual effects supervisor Allen Maris.

MPC Film was the lead VFX studio on the film; they delivered 198 shots using teams at their Vancouver, London and Bangalore facilities.  To support Gray and Maris’s vision for the film’s look and feel, MPC focused on scientifically accurate effects; brightness and exposure levels between stars and surrounding assets, the defining look of materials and even how the assets were built, were all considered.  Tremendous attention was put into numerous small details, including distance scale and all-important light exposure; the lighting of various objects depended on their distance from the Sun over the length of Major McBride’s journey across the vastness of space.

According to MPC CG supervisor Eric Andrusyszn, “We worked on a wide range of shots. We did the launch base and Earth takeoff, the Moon landing and Moon city sequences. We also did the Moon takeoff, the Mars landing and Mars city as well as some of the Mars ground travel when McBride is in the Rover and then walks over to the hatch. We also did the Mars takeoff and a lot of the space travel as well. We handled the shots where you see the ship hurtling through space as McBride makes his way to Neptune. And for Neptune, we did the rings and the sequence where Pitt and Jones leave the station, up until the point Pitt travels through the Neptune ring back to his ship.”

The Moon base build was particularly complicated; it went through several concept designs before successfully matching up with Gray’s vision of a clean and streamlined base that was large and grand in nature. MPC used Terragen to recreate the planets and broke down those shots into more complex data sets for greater control of the intricate details. MPC also worked with Technicolor and VFX studio Mr X to tackle the scale and to define the look of Neptune and its rings.

One of the biggest assets MPC created was Major McBride’s main ship, the Cepheus, which he uses to travel across the solar system. Similar to the Moon base, the concept art for the Cepheus was highly developed, down to its ISS style sections and smaller outer detail. Particular care and attention were put towards creating realistic smoke plumes for the ship’s takeoff.

MPC has worked on a number of sci-fi “space” movies, including The Martian and Prometheus. On Ad Astra, they pursued a degree of reality even greater than on previous shows. “Our work was based on trying to create something that felt tangible, more based in our reality that we’ve done before,” Andrusyszn shares. “We spent considerable time trying to make sure we got as realistic as possible, to the point where you’d look at some of the technology, like the Cepheus and think it could actually exist. We’ve done a number of shows where making things as realistic as possible is a key factor. Here we did that in space.”

While trying to stay as close as possible to the original concepts and designs, MPC made extensive use of reference material in their creative process. “For takeoffs especially, we watched a lot of NASA footage,” Andrusyszn explains. “We needed to make sure our takeoff effects simulations were as close to that reference as possible. We really stayed close to those real-life examples. The big thing though was selling scale, making sure that everything felt big and grand. And a lot of that work is in the details. In order to sell the enormity of things on screen, we spent a long time on specular highlight details, especially on the Cepheus, making sure the light looked the way it would in real life.”

One of the film’s big visual challenges was depicting light within the vastness of space. “The interesting thing about space, as opposed to in a room on Earth, for example, is that you have a uniquely distinct lighting setup. When you're in space, you basically have one light: the Sun. It was a challenge to stay true to that lighting scheme. For me, from a compositing perspective, regarding specular highlights, one thing I really looked at was not only their size and intensity, but how they reacted with a film lens.” Andrusyszn relied upon Nasa footage to guidance. “When I first started, I once again went back to the NASA footage,” he reveals. “I looked up a lot of imagery and paid close attention to all the photographs they had from various moon walks and moon landings. There's a distinct ringing that tends to happen around bright spots. We made sure that all the optical effects looked as real as possible.”

“Compositing challenges vary from movie to movie, even scene to scene” Andrusyszn continues. “Because compositing is a pretty involved and encompassing job, every movie is different. On Ad Astra, one of our main challenges was making sure we could sell that scale, because without that scale, it just doesn't feel right. In addition to the specular highlight work, we also focused on 2D practical effects as well. For example, the Mars scene where Major McBride is walking towards the hatch as he tries to make his way to the ship, we’ve got effects for those volumes, for the dirt being blown around during that storm, stuff like that. But there are a lot of times where we take practically-shot effects and blend them in help sell that extra real feel even more.”

MPC’s main compositing tool on the project was Nuke. “We largely worked in a program called Nuke,” the CG supervisor notes. “It's pretty standard within the industry. Once in a while, we use other tools besides Nuke, but that’s fairly rare. Usually, if we need any unique tools, they’re used within Nuke. For example, we used a tool for referencing stars that I think had between 30,000 to 40,000 of the closest stars in our universe within its database. So, we attached it to the camera for each shot, and it gave us a realistic drift. That gave us a lot of freedom and control over the star fields; we had really accurate star brightness values rendered out as an HDRI for per-shot projection.”