True Kings of the Jungle

In support of the film’s home entertainment release, legendary VFX supervisor Rob Legato and cinematographer Caleb Deschanel talk about their groundbreaking work on ‘The Lion King.’ 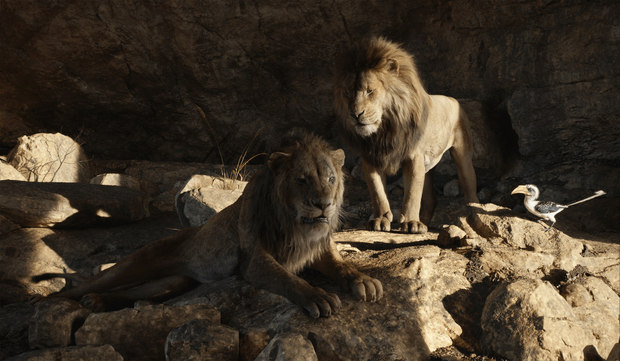 With its home entertainment release on 4K Ultra HD, Blu-ray and DVD, Disney’s beloved hit animated film The Lion King is now available for watching, re-watching, and re-re-watching by its millions of fans around the world. Featuring an extensive documentary on the film’s creation and a host of other special features, the non-virtual product has something to satisfy the desires of even the most diehard enthusiast.

In recognition of this landmark release, AWN took the opportunity to speak with legendary three-time Oscar winner Rob Legato, the film’s VFX supervisor, and six-time Oscar nominee (the seventh time’s the charm) and renowned cinematographer Caleb Deschanel about their experiences working on The Lion King.

We began by asking Legato, who won one of his Academy Awards for his work on The Jungle Book, whether for him The Lion King was more like a continuation of that work or a different animal entirely.

“I kind of compare it to MGM musicals from the 40s and 50s,” he said, somewhat surprisingly. “They did one after another and got better and better at it, because you had the same group of artists doing the same thing with the goal of improving it each time. Jungle Book was as good as we could make it at the time, but after we made it, we knew how to leap forward.” As an example, Legato talked about creating the natural landscapes in Lion King, which for him was the single biggest challenge. “The landscape is part of the fabric of the story, so it had to be better than what we were able to achieve in Jungle Book. I was never 100% happy with the wide shots that we did for Jungle Book, in terms of my eye believing it ­– I could see the fake of it. In Lion King, we relied more on simulations to create the illusion of real life and it worked because it pretty much is real life. It's the physics of real life, it isn't hand animated. The wind just blows and does what it does. The same thing with water; you build the simulation and let it do what it would really do based on the forces of water. Now every molecule in this background is not a matte painting, it's a full 3D version of it. It takes a lot longer to do – the effort and the time and the computer power is astronomical. But the rewards are great too.”

And what was it like to work in this virtual environment? Especially for someone whose career and sensibilities were built around live-action filmmaking?

“I mean, you talk about virtual reality,” said Deschanel, “but I have to say that once you put on the goggles and got used to it, the virtual part just dropped out and you felt it was real. There was grass, there were trees, there were all the animals. You saw them and you could move around them and do everything you can do in reality. The tools that Rob and Magnopus developed - the camera, the gear head, the fluid head and the dollies and the cranes - and the ability to use a steady cam, I mean, all those tools were just like the tools I was used to working with, except that it was in this virtual space.” According to the cinematographer, “When [director] Jon Favreau was talking to me about doing the film, he said, ‘Listen, I want you to do the film because you filmed reality for the last 45 years, and you know what a real film is supposed to look like. And I want you to bring that sensibility to the making of this movie.’ And that's exactly what we did.”

One of the only things Deschanel said he missed when working in the virtual world was the spontaneity, “the serendipity of some actor coming up with a line or delivering something in a way that was unexpected.” “However,” he continued, “what was lost in this area was more than made up for by the freedom and new possibilities for discovery that came with shooting in a digital environment, as compared to live-action.”

“In The Patriot [a 2000 feature starring Mel Gibson that Deschanel shot], we had these big battle sequences with 600 actors (who then got multiplied into 5,000 with digital effects),” he described. “We would get great shots, but you would never do a shot that would get maybe one little moment of screen time because you would be wasting all the action. But in Lion King, we could get those shots, which would be really valuable. For instance, in the wildebeest chase scene, if that were done live, you'd probably set up nine or 10 cameras along the canyon and get the best shots you could get. But you would never get a shot like Simba running and then hiding behind a rock and cringing as the wildebeests run over him because that wouldn't be one of the places you'd focus a camera.” “You prioritize things when you're doing something live because you know you only get one or two times to do the shot because of the complexity and cost of redoing it,” he added. “On this film, we didn't have that limitation, so we could discover those sort of wonderful moments that were really important. And we could get different size shots to read the emotion in the characters' faces or to read the emotion in their body movement.”

“Our live-action approach to the movie was to take advantage of things that we didn't personally control to let the natural beauty of the randomness of life take over,” Legato shared. “And we also tried to use the same iterative technique that inspires live-action, where you might have to do a move multiple times to get it right. We just imitated that for this movie. Don't fight it. Don't try to improve on it, just take advantage of it. Do 15 takes if you like, then pick the one that you like the most. And that sum total will create the film.”

Nor was imperfection necessarily a bad thing, as Deschanel noted. “If we followed an animal and missed the action a little bit, we would sometimes leave that in because, even though we could repeat it as much as we wanted to and get it perfect, we wanted the audience to have a sense that there was a person behind the camera making decisions that are made all the time by people making live-action movies.” On a final note, turning from virtual reality to reality-reality, Deschanel expressed his hope that the film would be inspiring in another way. Recalling the research trip he made with other crew members to Kenya, [which is documented on the DVD],  he said that they all also wanted the film to be “a tribute to the incredible beauty of Africa –Maasai Mara reserve, Amboseli National Park, Mount Kenya, and all the beautiful environments that are represented in the movie. I hope people will recognize that this beauty is worth protecting and saving.”

Read Disney’s ‘The Lion King’ Now Available on Digital in HD, 4K Ultra HD and Movies Anywhere for complete details on the Digital and DVD releases.

Animated Characters: The Art of Babbitt – Part 1
Bruce Smith and Ralph Farquhar Talk ‘The Proud Family: Louder and Prouder’ Season 2
VFX is the ‘Thing’ for Tom Turnbull on Tim Burton’s ‘Wednesday’
We Need to Chat
Choc Chip Animation Riffs on Pop Culture in ‘The Art of Murder’
F is for Flake: The (Not So) Great Animation Robbery?
Re-VIEW: ‘Avatar: The Way of Water’ – A Miraculous Vision
‘Kung Fu Panda: The Dragon Knight’ Celebrates a Special Lunar New Year
END_OF_DOCUMENT_TOKEN_TO_BE_REPLACED