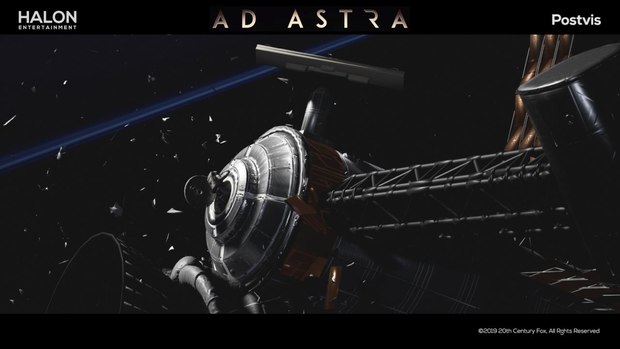 Ad Astra, now playing in theatres, is a taught, gripping drama set in a believably advanced but not too distant Earth future, where the Moon, Mars and our own solar system play backdrop for a dangerous outer space journey with dire consequences for humanity's survival. The film, billed as a paranoid space thriller, follows Roy McBride (Brad Pitt), a reluctant but dutiful astronaut sent on a mission across an unforgiving solar system to uncover the truth about his missing father (Tommy Lee Jones) and doomed expedition that now, 30 years later, threatens the universe.

Joining director James Gray on the Plan B Entertainment production are Academy Award-nominated cinematographer Hoyte Van Hoytema and visual effects supervisor Allen Maris. Leading visualization company Halon Entertainment worked alongside Maris and Hoyteman to help realize Gray’s unique vision of man’s future efforts to explore our solar system, and beyond.  For Halon previs / postvis supervisor, Casey Pyke, Ad Astra is the first movie he’s worked on that was shot on film, not exactly surprising in our new age of digital filmmaking. He came onto the project at the start of the postvis phase. According to Pyke, “I became involved on Ad Astra during postvis as the postvis supervisor. Halon had already done previs for several sequences on the film, including the intro on the space antenna, the space walks, Mars takeoff, and final flight through Neptune’s ring. Both the previs and postvis teams were about five people. Previs took three months while postvis took four. We covered much the same ground that previs did, but ended up doing a fair bit of previs ourselves for VFX and reshoots.” Postvis work included greenscreen replacements and full CG shot development. “For postvis, Halon was brought in to fill in greenscreens and visualize all CG shots to help editorial put their cut together in the best way to tell the story,” Pyke shares. “A big goal for us was to keep the space shots and sequences grounded. We used reference of SpaceX rocket landings and moon lander take-offs to base our Moon and Mars landings and launches, which helped us keep the space scenes feeling grounded. For the antenna sequence, we built our digital set at the height from Earth it was meant to be in the film, and generated shots from way up there, so the curvature of the earth was correct. In addition, we referenced real footage of a nuke going off in space for the big explosion toward the end of the film.”

Realistically depicting the vastness of space was always particularly challenging. “One of the biggest challenges on the film was dealing with the incredible distances between objects in space,” Pyke explains. “It was a constant challenge to get the compositions we needed by not cheating the space environment too much. And there was the added technical challenge of rendering out those huge distances. To get a better look for the space scenes, production chose to shoot on a blackscreen instead of a bluescreen. This made the images feel quite real once we had our space-scape backgrounds comped in. But, it was very time intensive to rotoscope out shadowed limbs that had the same black values as the black background.” “Luckily, we relied on Halon’s pipeline, which uses Unreal Engine for real-time rendering,” he adds. “It allowed us to get great images from these massive scenes. We developed the pipeline for War for the Planet of the Apes, and we continued to refine the production process on Ad Astra. We used Unreal Engine for rendering and some real-time exploration. The engine gave us the ability to render out loads of shots and variations in a very short time at a high visual standard.”

Striving to build realistic, futuristic imagery while working with a great crew made the project especially meaningful for Pyke. “What made this project special was the crew,” he reveals. “I enjoyed every day on the project, working with such wonderful people. I loved listening to the stories James Gray would tell at lunch. And it was a great experience to try and visualize shots that were one-part grounded reality and one-part art.”