From defying gravity to expressing emotion in a believable way, reality was key for animation supervisor Catherine Mullan and the team of artists at MPC. 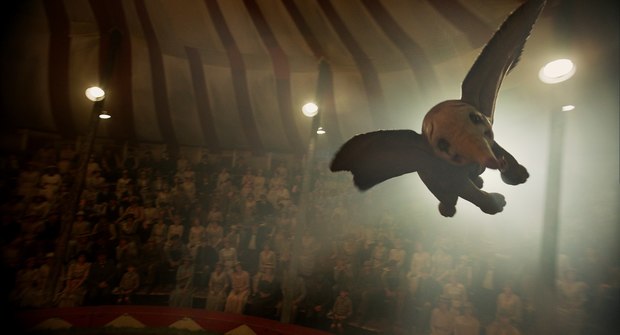 For Disney’s live-action remake of ‘Dumbo,’ director Tim Burton wanted the baby elephant to feel joyous and free as he flew through the air. Images ©2018 Disney Enterprises, Inc. All Rights Reserved.

Unlike other visual effects-oriented movies MPC Animation Supervisor Catherine Mullan (Monster Trucks) has worked on, the live-action remake of Dumbo directed by Tim Burton (Dark Shadows) was all about portraying the performance of the title character. “I came on during the preproduction stage and was involved quite heavily with the rig for Dumbo,” says Mullan. “When the asset was being built there was some back and forth to make sure that the design would work for the animation. I was working quite closely with [Production VFX Supervisor] Richard Stammers [The Martian] throughout. There were certain actions and scenes that people thought could have been problematic so at an early stage we started to develop how Dumbo would fly, move, and emote. When shooting began we continued with the character development and showed some key pieces to Tim Burton for feedback.” Rather than the traditional shot-per-shot approach, the previs team worked on grand master scenes. “Previs could go in and add cameras to help define the shoot process,” Mullan explains. “While they were trying to figure logistics, the animation department was refining and polishing the way in which Dumbo expresses himself and how real he would look amongst the characters.”

Stuffies and a stand-in played by Edd Osmond were used on-set while animation tests were shown to cast members to give them a sense of how Dumbo would look like and move. “Edd had a headdress that he wore that showed the position of his eyes because Dumbo’s head is so much bigger,” Mullan recounts.

Mullan and Stammers directed Osmond as to what was needed for certain scenes. “There is so much that happens and develops on-set that being there you automatically know the history behind the plates and why decisions were made. You’re also there to look ahead and try to inform the decisions that are being made on-set,” she says.

“We had done some tests [before principal photography] on what we thought Dumbo’s takeoff would look like as well as how long it would take for a character of that size to get off of the ground,” Mullan continues. “We could look our tests and at what they were shooting and judge whether that would actually work once we got it into post.”

Part of the research involved examining footage of baby elephants to see how they move. It was important to show that he was very weighty when on the ground but with the flight there is an element of suspension of disbelief. “Tim wanted Dumbo to feel joyous and free, and when he’s in flight it’s natural to him,” Mullans says, noting that the takeoff shots were the bridge between Dumbo’s weightiness on the ground compared to his relative weightlessness as he flies through the air. “You’re trying to get as much anticipation and effort into each of the two or three giant flaps when Dumbo gets off of the ground; those were the key moments,” Mullans continues. “Also, making sure that he isn’t rising up too quickly or easily.” Birds served as the biggest visual reference when it came to the flying scenes. “We looked at how birds physically flap their wings as well as the actual physics [of flying] and put that into the animation we were doing.”

Alongside having to make an elephant look good while flying, Mullan had to deal with a protagonist that had no lines of dialogue. “There was definitely a lot of subtle animation and facial development that went into how we portrayed Dumbo’s thoughts and feelings and how he interacted with the other characters. From a technical standpoint the ears were something that we had to figure out from a rigging perspective,” she says. “We used FK [Forward Kinetics] for the flying shots so those weren’t too difficult. But when he was on the ground, we had to develop a cloth simulation inside the animation puppet [which is something we have never done before] and that allowed us to always show his ears in any kind of animation presentation.”

Wrinkles had to be incorporated as vertical and horizontal patterns which occurred depending on whether the legs were moving forward or backwards. “The wrinkles came at a later stage when they were getting into rendering. There was a lot of development on the rig binds that went into how they looked and then replicating it everywhere else,” Mullan says, noting that having the cloth simulation in the ears slowed the process down: “The animators could work without the ears but always had to be aware that they were there as the shaping and posing of them could portray something different.” A complicated sequence occurs when Dumbo is given a soapy bath. “We shot Edd wearing a variation of his suit which was fatter and more in proportion with Dumbo’s actual size,” recalls Mullan. “It was a black color so they were able to pickup more of the water and suds from the live-action set. We shot a lot of witness cameras as well so we had a lot of interaction on the Dumbo puppet. We went back in and roto animated all of the characters and the props, like brushes and sponges, to try to match that up as well as the initial Dumbo performance. There were moments where Dumbo is touching a hand of a character and we would try to keep them as much as possible. But a lot of stuff was replaced as well, for example, we created variations in the hands. The soapsuds were a mixture of live-action elements that were shot separately, the stuff done on the day, and CG effects,” she says.

A motion-base shoot was conducted at the end of principal photography. “The motion base was used when we had characters, like [trapeze artist] Colette Marchant [Eva Green] and the kids, Milly Farrier [Nico Parker] and Joe Farrier [Finley Hobbins], riding Dumbo,” Mullan recounts. “In order for us to create those motion-based shots a lot of animation needed to be created beforehand. We would need almost final camera and animation to be able to recreate that shot. Eva would be on top of Dumbo travelling at the correct speed and the camera would be exactly what we wanted. If you were to take the Dumbo animation cycle without changing anything it would have difficulty running on the motion base because you’re taking something that’s organic and putting it on a machine.”

Safety concerns in regards to the motion base and wirecam meant that the children and Eva were shot at slower speed than what actually appears in the movie. “There were definitely a lot of iterations as to how we could come up with the same shot and make it safe,” Mullan remarks. “Once it was taken back into the CG world, we were able to put the stuff that was lost back in through a combination of compositing and 2D motion.”

Shadows and reflections had a significant role in having the CG title character integrate with the live-action photography. “Lighting is a huge thing but there were a lot of 2D and 3D elements added more towards the end as well along with dust, fire and smoke to get them in the same world,” she says. “An iconic moment from the original animated classic is when Dumbo says good to his mother, Mrs. Jumbo. If the audience isn’t crying then we haven’t done our job properly! It was about creating tenderness. The facial reactions and posing of the body were key. With Dumbo the majority of it was in his eyes. Extra shots were created to allow the time for that feeling to unfold.” VFX is the ‘Thing’ for Tom Turnbull on Tim Burton’s ‘Wednesday’
We Need to Chat
Choc Chip Animation Riffs on Pop Culture in ‘The Art of Murder’
F is for Flake: The (Not So) Great Animation Robbery?
Re-VIEW: ‘Avatar: The Way of Water’ – A Miraculous Vision
‘Kung Fu Panda: The Dragon Knight’ Celebrates a Special Lunar New Year
END_OF_DOCUMENT_TOKEN_TO_BE_REPLACED