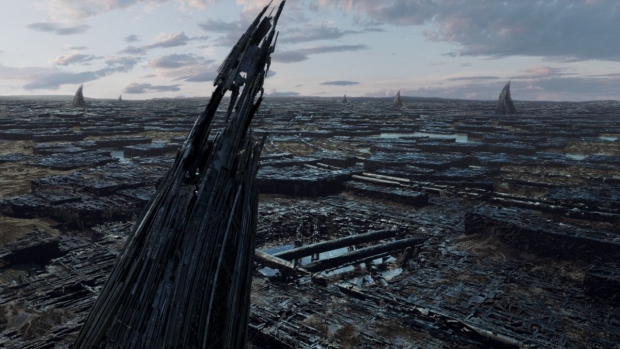 Fifteen years ago, Rocket Science delved into episodic VFX because there was less competition, as many of the larger facilities were more engaged in feature films. Early on, we found our niche as a high-end VFX facility for the television market.

Fast forward to today—the television market has exploded. The rise of OTT and new streaming platforms is driving an increased demand for episodic content, spurring new competition among vendors, more visual effects opportunities than ever before, and limitations in the talent pool of highly skilled artists.

For example, the workload for VFX on a feature film is akin to a tidal wave, rapidly increasing until the project reaches its peak, then once all the deliverables are final, the team recoups and enjoys downtime until the next project commences. In contrast, the workload of episodic VFX is like a fast moving, steady, endless flow of waves crashing against the shore. On one hand this is great, because the work is steady, but the pressure of constant deadlines and increasing complexity of multiple projects never ends.

Because episodic TV demands consistent scheduled delivery of complex VFX sequences, smaller facilities are required to be aggressive to compete with larger studios. At Rocket Science, as soon as we receive a plate, we’ll often begin working on the shot before we’ve even finished bidding, because if we wait any longer, we’ll fall behind.

As demand for content for episodic TV increases, the scale of VFX for television is also starting to rival workloads for high-end features. One of the biggest challenges for smaller facilities working in episodic VFX is in having the ability to scale up to meet those client expectations.  Rocket Science has worked on The Expanse since season one, and typically our workload more than doubles each season. Expectations have grown as artistry, techniques, software, and hardware have advanced, so after four years, the visual effects we did for the pilot will no longer suffice for Season 5. For us, strong team communication is critical to track everyone’s workload and abilities, to know how much work you can take on, and be aware of the quality level the team is capable of delivering to meet deadlines. Overpromising and under-delivering may cost you clients. As teams scale and studios more than double—and even triple—in size, it’s imperative to ensure teams are fully connected, engaged, and creating high quality work through production.

As Rocket Science has expanded, Shotgun has been integral to managing our production pipeline, allocating tasks, facilitating review cycles, and streamlining collaboration. Shotgun provides a central platform for communication no matter the location of artists, supervisors, producers, and clients. When I’m off-site or traveling, I can still provide notes and steer artists in the right direction. I may not be able to talk to every artist every day, but with Shotgun organizing progress, tasks and review cycles, I don’t need to. Every member of the team has what they need to be successful and move work forward.

For struggling productions, Shotgun serves as a central database to view the bottlenecks hindering team productivity. Patterns emerge, such as people reassigning too many tasks, client priorities changing and affecting deliverables, or too many different shows in progress simultaneously. Too much communication can also be a bottleneck, seen in many larger facilities where emails, messages and meetings become siloed, bogging down workflows. Through Shotgun, studios can view data and determine the optimal organization for communication and overall production management to maximize productivity, alongside creativity. I compare where we are now to my first job in the VFX industry. My team was tasked with creating Tokyo in six weeks, and as artists became overwhelmed with the daunting assignment, productivity suffered. We spent one-third of the project worried about how we’d be able to deliver in time. Once we started to break down the production into high- and low-res city blocks and delegate tasks, we were better equipped for delivery and less overcome by the immensity of the project. Essentially, this is what Shotgun now does for the entire studio.

To scale for high-end episodic VFX, it’s important that every member of the team has a clear vision of the project, an understanding of their tasks, and a channel for communication to stay updated on and discuss overall progress. It’s important to keep an eye on the bigger picture, but be able to hyper-focus on executing the smaller tasks required for high quality delivery. With all data managed within Shotgun, everyone can utilize it as needed and work as efficiently as possible.

Chris Nokes if Head of Production at Rocket Science.