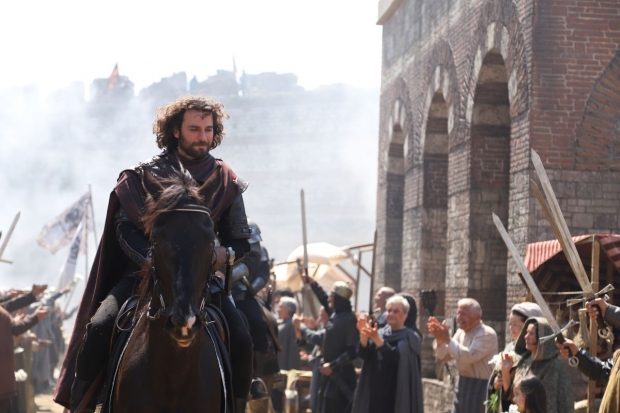 MOJO FX has just shared with AWN a great breakdown reel and images showcasing their VFX work on Netflix’s popular six-episode docu-drama, Rise of Empires: Ottoman, which premiered worldwide this past January on the streaming giant.

RISE OF EMPIRES: OTTOMAN | BREAKDOWN from Mojo FX on Vimeo.

In one of their biggest sets, the VFX team built a fully digital city of Constantinople; the Byzantine Empire’s capital city was conquered by the Ottoman army in 1453. They also modeled the famous Hagia Sofia, a former Greek Orthodox cathedral that became an Ottoman imperial mosque and today is one of Turkey’s most famous landmarks. Now a museum, it was once the world’s largest building; its massive dome was, and remains, an engineering marvel.

Another major sequence involved a fully CG sea battle depicting 30 Ottoman ships attacking three Genoese galleons. “As you watch the reel,” Semiz says, “note the variety and degree of detail within the work, including water simulations and soldiers on the ships.”

The MOJO team also designed and produced a huge, fully CG battle between two armies. According to the VFX supervisor, “For our crowd simulations, we modeled the soldiers through a full-body scan process and captured them with 360-degree photogrammetry and motion capture cycles.” “As you can see in the pictures below, Byzantines had chained the entrance of the Golden Horn,” Semiz continues. “Since Sultan Fatih's navy was chained, he decided to carry the ships. Shooting that scene was very expensive, so, we went full CG where the ships moved from land into the Golden Horn.”

As is the standard chant in the VFX business, there is never enough time or money. For MOJO, this project was no exception. “The biggest challenge for us was we did not have enough preparation time,” Semiz adds. “We got involved in the project after about 40% of it was already shot. We delivered over 600 shots with a month and a half preparation and four months production time. Thankfully, we have had many experiences in Turkey delivering hundreds of shots in a very short time.”