The Oscar-nominated ‘Opera’ director teams with the Emmy-winning studio behind ‘Baba Yaga,’ ‘Bonfire,’ and ‘Crow: The Legend’ on new theatrical short, created with Quill, about the meaningful moments of one man’s life, symbolized by the positive and painful memories within the branches of a growing tree. 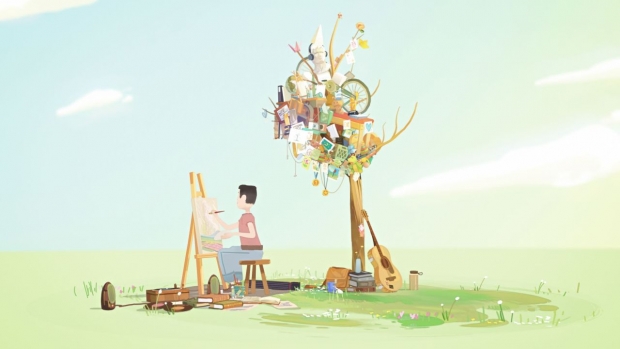 Erick Oh, Oscar-nominated director of the animated short, Opera, and Baobab Studios, the 6-time Emmy Award-winning studio behind hit immersive projects like Baba Yaga, Bonfire, and Crow: The Legend, have announced their new animated short film, Namoo, will celebrate its U.S. theatrical version online premiere at the upcoming Tribeca Film Festival. As part of the festival’s virtual “Tribeca at Home,” Namoo will be screened online to festivalgoers throughout the U.S. for the duration of the festival.

Oh and producer Kane Lee will also be in New York to present the film in person at a special premiere screening event, details to follow. Namoo marks Baobab Studios’ sixth Tribeca Film Festival premiere; Invasion!, Jack, Crow: The Legend, Bonfire, and Baba Yaga have similarly debuted at the festival.

Namoo (Korean for “Tree”), is a narrative poem come to life as an animated short film. Inspired by the life of Oh’s grandfather, Namoo follows the meaningful moments of one man’s life. The tree starts as a seed and eventually grows into a fully mature tree, collecting meaningful objects that represent positive and painful memories in its branches. This uniquely designed film was created with Quill, the real-time animation tool that allows you to draw in 3D, realizing the filmmaker’s artistic vision, and is Oh’s most personal film to date.

According to Oh, “The origin of the story goes back 10 years ago when my grandfather passed away. While grieving, I began to envision this core visual of one’s tree of life and how memories might shape it until perhaps one day it becomes something else entirely. For a decade, this idea has been sitting in my mental drawer and tucked away deep in my heart. But upon experiencing several more sad farewells, as well as meeting my newborn niece, I knew it was time to develop this idea into a short narrative, to show the life of someone from the beginning to the end, which again connects to another new beginning.”

“The story follows the journey of an artist beginning with his birth,” he continues. “As a young man, he falls in love with painting and as an adult, he falls in love with another person. While following his footsteps to his last moment, I found myself turning inwards and asking questions I never asked before. Life is full of ups and downs and we are constantly searching for answers, but we sometimes lose the things that matter most while pursuing what we believe them to be, without the hard-earned wisdom. However, it might only be when we are finally able to let things go, that we can see the forest for the trees. And though, your life is only one in a million it always has the potential to be the most beautiful bright star that will guide and inspire generations forward.”

Oh adds, “Namoo is a deeply personal yet perhaps universal piece that I hope may resonate with each audience member differently.”

Oh’s recent tour de force animated short and installation project, Opera, received an Oscar nomination for Best Animated Short in 2021. Opera continues to tour the festival circuit and will debut as an installation exhibit later this year in Paris and Seoul, among other key cities. His films have been presented at numerous film festivals including the Annecy Animation Festival, Zagreb Film Festival, SIGGRAPH, Anima Mundi, SXSW, and others.  After working as an animator at Pixar Animation Studios from 2010 to 2016, he directed PIG: The Dam Keeper Poems, which won the Cristal Award at the Annecy Animation Festival in 2018. Oh is currently working on a variety of projects with his partners in film/animation, the VR/AR industry, and also the contemporary art scene in the US and South Korea.

A leading independent interactive animation studio, Baobab Studios, founded by Eric Darnell, Maureen Fan, and Larry Cutler, has a mission to "Bring out your sense of wonder. Inspire you to dream. Make YOU matter.” Baobab has released Invasion!, Asteroids!, Jack, Crow: The Legend, Bonfire, and Baba Yaga to commercial and critical acclaim. They’ve won six Emmy awards, including three Best Interactive Emmys, the first ever Best VR Annie Awards, and SIGGRAPH’s first Best in Show Immersive Award. Baobab's VR IP is being developed in several different mediums; Roth Kirschenbaum Films has signed on to adapt Invasion!, Baobab’s first interactive movie, into a traditional feature film, while Penguin Random House has partnered to turn Baobab's The Magic Paintbrush into a multi-book series, and MacMillan has partnered to turn Intercats into a graphic novel series.