On the Road to the 93rd Oscars: The Animated Short Film Nominees

‘Burrow,’ ‘Genius Loci,’ ‘If Anything Happens I Love You,’ ‘Opera,’ and ‘Yes-People’ vie for this year’s Best Animated Short Oscar. 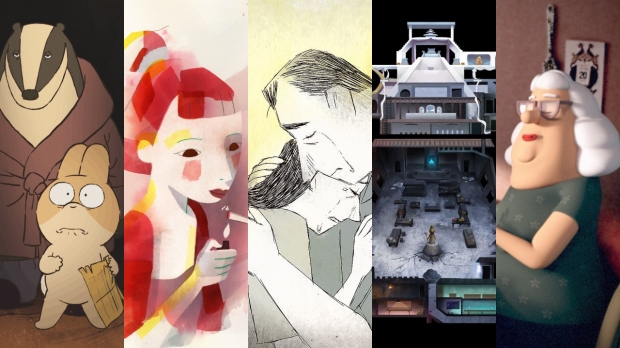 Sporting just as much unique design and emotional impact as any animated feature, each of this year’s five nominees for the Best Animated Short Oscar proves that even in times of adversity, such as the pandemic, creative excellence always emerges, often in the smallest of packages. Telling a compelling story in 6, or 16 minutes isn’t easy, but our five directors managed to do just that, taking audiences on wonderful journeys through various combinations of stop-motion, 3D/CG, and good old 2D.

This year’s nominees span the globe: From the U.S., Burrow and If Anything Happens I Love You; South Korea, Opera; Iceland, Yes-People; and France, Genius Loci. Each exemplifies how animated shorts can be so captivating and entertaining, little nuggets of visual and narrative delight each more diverse and different than the next.

From introverted rabbits and grieving parents to abstract and even provocative illustrations of humanity’s foibles, we’ve provided a breakdown of this year’s slate of five animated shorts each vying for the Oscar, including trailers, behind-the-scenes talks, two complete films, and links to AWN story coverage. Congratulations to all the nominees and be sure to watch the 93rd Academy Awards ceremony, taking place in person, and streaming live, Sunday, April 25. Written and directed by Madeline Sharafian, this hand-drawn, classic children’s book-style 2D animated short follows the gentle, funny, and utterly charming story of a young rabbit as she embarks on a journey to dig the burrow of her dreams, despite not having a clue what she’s doing. Rather than reveal to her mole and mouse neighbors her shortcomings and imperfections, the rabbit digs herself deeper and deeper into trouble. Literally.

Produced by Mike Capbarat, Burrow is a story about learning it’s OK to ask others for help. The film was produced as part of Pixar Animation Studios’ experimental in-house animated short film development program, known as SparkShorts, designed to discover new storytellers and explore new storytelling techniques from across the studio. The film is available on Disney+.

“For this project, I was given a lot more freedom to make a bigger world, because with just six months, and probably not many people being made available, the number of things that you'd be able to model and shade in 3D was going to be a little bit limited, just because of time,” says Sharafian. “And for me, I wanted this rich world. I wanted all these different homes and rooms. You can draw something, you know, in two days that looks quite complicated. And I wanted to have as many of those as possible.”

The first-time SparkShorts director adds, “One of the biggest challenges for me was gaining the confidence to lead for the first time. I was always nervous the first days of working with a new group of people, but since Mike and I would walk around to every artist’s and animator’s office every day, I soon got to know everyone individually. Thanks to all that individual time together, by the time we really got into our groove, I was much less nervous since I felt like I was speaking to a room of friends!” Following the life of a young loner, Reine, who lives with her sister, this 16-minute 2D animation depicts how the main character views her discovery of a mythical world beneath the urban chaos of her every day, normally disquieted life. The film is a bit of a trip; the visuals, primarily abstract art, are brought to life amidst an unpredictable mixture of sounds, never fully acknowledged as real or simply part of Reine’s hallucinations.

Commenting about Genius Loci, FX stated, “In its shifting lines, morphing colors, and elegant writing, the film immerses us into the mind of the lonely soul, seamlessly capturing her fears, joys, relationships and eventual peace. A beautiful film that explores the chaos of our world while celebrating the subjectivity of the human experience.” If Anything Happens I Love You

Depicting the sadness, grief, and eventual healing of two heartbroken parents, If Anything Happens I Love You is a 12-minute sketchbook-style 2D animation about an estranged husband and wife who have lost their young daughter in a school shooting. As the couple’s shadows weave through memories of their lost child, filling themselves with blame and regret, their daughter’s shadow works to open the floodgates surrounding the parents' despair, exposing their emotional vulnerability with the hope of pulling them back together and making the family whole again.

The Oh Good Productions animated short, available on Netflix, was created, and directed by Will McCormack and Michael Govier. The film has no dialogue but utilizes the classical musical stylings of Los Angeles composer Lindsay Marcus and the watercolor splashes of animation director Youngran Nho to illustrate the emotions and thoughts of the roughly sketched characters, all which hold symbolic meaning.

Govier says the goal of storytelling is that “there's some kind of communion around it,” and he believes that the film’s animation has been a vital tool in providing just that. “We wanted the film to look and feel like grief, with these raw edges and a monochromatic feel where the image drops off the frame,” he continues. “We chose the animation to fit the mood, fit the story, and fit the film we wanted to create. In those rough edges, I think the animation really pulls you in more to the characters and you really feel these emotions, because you're not looking at a lot within the frame. You're not really distracted.”

“It was also the most rewarding experience of my life,” McCormack adds. “I felt like everyone who came onto the film was there for the right reason, because they believe in the story and would do anything to tell it...This film is showing what animation can do. It's showing that you can have these wonderful, deep conversations and animation is the vehicle to begin them.” This 9-minute, 2D/3D/CG short film is described by director Erick Oh as a contemporary animated edition of Renaissance fresco mural paintings meant to portray our society and history, filled with beauty and absurdity. Known for his 2018 Annecy Cristal-winning series, PIG: The Dam Keeper Poems, Oh’s mesmerizing animation consists of a day and night cycle that can be played on an infinite loop.

In Opera, viewers experience a range of emotions through Oh’s unique, intricate reflection of human life, from fear, disturbia, and sadness, to hope, comedy, and thought. The South Korean and American animated short film proceeds like a living piece of art, designed as an invitation to question the mechanisms of our society and human behavior. Each section and individual character’s activities are intrinsically connected so the viewer can eventually enjoy the entire pyramid no matter which character they set their eyes on first.

“In January 2017, Donald Trump became president of the U.S. and a few months later in March, president Park Geun-hye in Korea was impeached,” Oh says. “It was, indeed, the year of chaos and I had to tell a story that documents this part of humanity, which actually has been repeating in human history numerous times, in different forms and cultures.  This piece fearlessly touches upon diverse issues like racism, terrorism, religion, natural disasters, war, education, economy and more in different parts and classes within our society. And after all, everything continues looping eternally.” Written and directed by Gísli Darri Halldórsson, known for his Oscar-nominated short Granny O’Grimm’s Sleeping Beauty and The Room on the Broom, and produced by Arnar Gunnarsson, Yes-People uses Claymation to tell a story about an eclectic mix of Icelanders finding a way to cope with life’s daily struggles, from school and work to alcohol addiction and marital intimacy.

Produced by Treasure Trekker’s Arnar Gunnarsson as well as Halldórsson for the production companies CAOZ and Hólamói, the lighthearted but efficient pacing and visual design make Yes-People a rediscovery with every viewing.