The Mesmerizing and Surreal Animation of Erick Oh’s ‘OPERA’ 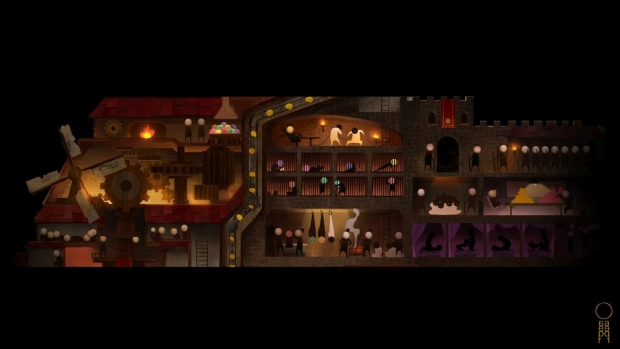 Erick Oh, who directed the 2018 Annecy Cristal-winning series, PIG: The Dam Keeper Poems, has released a provocative and visually stunning new animated short, OPERA, a project he defines as a contemporary animated edition of Renaissance fresco mural paintings. Oh spent six years as an animator at Pixar - from 2010-2016 - before joining colleagues Robert Kondo and Daisuke “Dice” Tsutsumi at their studio, Tonko House, home to the award-winning The Dam Keeper franchise.

The 9-minute 2D film, consisting of a day and night cycle that can be played on an infinite loop, has also been selected in competition at the Ottawa International Animation Festival and Animafest Zagreb as well as Odense International Film Festival, Vladivostok International Film Festival and Anifilm.  Also, this September, an 8K exhibition version of the film will premiere in Austria at Ars Electronica’s Deep Space 8K. The Deep Space 8K is the only space in the world that offers 16 x 9 meters of wall and another 16 x 9 meters of floor projection, laser tracking and 3D animations. Oh will also present a 30-minute program about the making of the film and is confirmed as one of the jurors for the festival’s Computer Animation section as well. In early 2021, the physical exhibition will open to the public in Seoul, Korea.

Written and directed by the award-winning filmmaker, Opera is driven by the spirits of Bosch, Michelangelo, Botticelli, and others. In his own signature whimsical and surreal way, Oh portrays human society and history filled with beauty and absurdity. Viewers will experience a range of emotions through this unique, intricate reflection of human life: it is hopeful, comical, and thoughtful, yet scary, disturbing, and sad. The piece proceeds like a living piece of art, designed as an invitation to question the mechanisms of our society and human behavior. Each section and individual character’s activities are intrinsically connected so the viewer can eventually enjoy the entire pyramid no matter which character they set their eyes on first. The core idea and message of the film first came to Oh in 2017, a time filled with numerous iconic moments in world history. “In January 2017, Donald Trump became president of the U.S. and a few months later in March, president Park Geun-hye in Korea was impeached,” he says. “It was, indeed, the year of chaos and I had to tell a story that documents this part of humanity, which actually has been repeating in human history numerous times, in different forms and cultures.  This piece fearlessly touches upon diverse issues like racism, terrorism, religion, natural disasters, war, education, economy and more in different parts and classes within our society. And after all, everything continues looping eternally.”

Using exacting, precise animation, the director fills numerous frames with distinct, separate stories all tied into a larger context; each iterative vignette integrates into the larger, cyclic narrative. Describing his visual development, Oh notes, “I wanted to create a world that reflects different parts and stories of our life.  This idea naturally led me to design a structure that captures every detail of our everyday life in different classes. In those structures and numerous different locations and levels, people live and survive, interacting with each other.”

“This piece is designed to overwhelm the viewers with the scale and complexity when they first face it,” he continues. “However, if you start following any character in any location, you'll soon realize that he's playing his role as a part of this huge system. He influences others by handing something or taking a certain action and that becomes a butterfly effect.  And those interactions and connections are mapped very delicately.  In short, wherever you start paying attention, you'll be able to observe every section. Of course, you'll have to watch a couple of times to fully experience every part.”

Oh adds that the film’s basic design was heavily inspired by his previous personal work, though his latest piece expands and deepens upon the worlds he has visited before. “I’ve been using a black and white character for the past few years as my self-portrait or avatar,” he shares. “It's a simple poetic design that I can apply lots of things to. With those simple characters and symbols and metaphors, I created many mini-short films previously, such as How to Eat Your Apple (2012), O (2015), and an animation poetry series on my Instagram.” As far as the animation, Oh reveals that “since there are no cuts or camera moves, this is one singular linear shot, where the whole structure can be broken down to 24 sections.” His team included 10 animators and 7 cleanup artists. “Each artist took 2-3 sequences on average and once each sequence was completed, we took it to the compositors, who did a tremendous job tying everything together beautifully.”

As an independent project, OPERA both benefited from and was challenged by Oh’s harnessing artists with a strong sense of commitment to the value of the film. “Most of the artists who were part of the journey volunteered with a pure passion and faith to the project's vision,” he notes. “They all thought this is a timeless story that must be told, especially in this chaotic era of our modern life.  Since they were only able to work on the weekends, the whole production period got extended to almost 4 years. That caused numerous challenges that held the project back. However, thanks to many friends and artists' help and support, OPERA is finally complete and about to meet audiences out there.”

Ultimately, Oh hopes audiences find a bit of themselves in the film. According to the director, “It may make you laugh, sad or sometimes disturb you. But we all know that that's all part of our life and who we are.  In the end, the ultimate message I'd love to share with everyone is to learn from our past and grow to make our today better than yesterday…and make tomorrow brighter than today.  2020 has been a most difficult time for everyone. The world has gone upside down and everyone is scared and exhausted. I really hope this piece can touch everyone's heart and start the right discussion on the right topic.”