A collaboration between the VES, ASC, and a host of industry experts, with industry support from Epic Games and Netflix, the new database standardizes common vocabulary for virtual production professionals across departments. 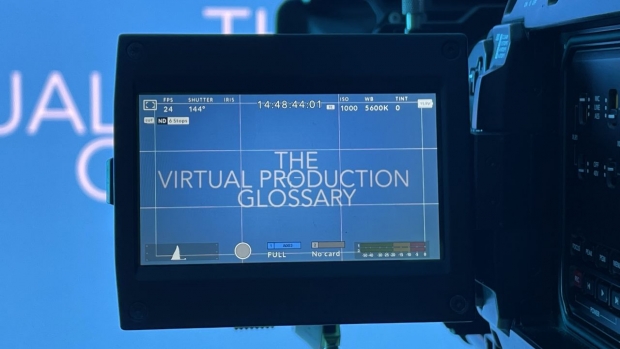 The Virtual Production Glossary, an industry-wide effort to establish common vocabulary across professionals working in virtual production, is now live. The database was established through a collaboration between the Visual Effects Society (VES), the American Society of Cinematographers (ASC), and a host of industry experts with support from Epic Games and Netflix.

The glossary is intended to be a dynamic, industry-propelled effort rather than a static document. Suggestions for new terms and updates to existing terms are encouraged via the website and the Virtual Production Glossary Discord community.

The multidisciplinary nature of virtual production requires a common language between departments whose work has traditionally been siloed across phases of production. As defined in the glossary, virtual production “uses technology to join the digital world with the physical world in real-time. It enables filmmakers to interact with the digital process in the same ways they interact with live-action production.” Virtual production processes—whether in the art department, visualization, cinematography, in-camera visual effects, remote collaboration, or real-time compositing—are empowering teams to work together in new ways.

“Virtual production unites two different worlds in film production that have been running separately for the last couple decades,” explained VPGlossary.com contributor and co-founder Ben Grossmann. “Physical and digital production can now happen together, creating a better experience for the filmmakers. Similarly, The Virtual Production Glossary brings the terminology of those two worlds together, shines a light on the meanings and clarifies the differences with context, so that the physical and digital crews can work together seamlessly on the same stage."

“The pandemic has sped up the demand to work together while not under the same roof,” shared Glossary contributor and award-winning VFX supervisor Rob Legato, ASC. “Simple creative questions can be answered easily and visually using shared screens via video conference, and the interactivity that virtual production can afford speeds up the creative decision-making process. Having the Virtual Production Glossary as a resource will help minimize miscommunications associated with the terms that define many of these newly emerging processes and technologies.”

"Virtual Production enhances workflows and responsibilities and therefore all kinds of communication between departments across a production - from prep to principal photography to post,” added Dark Bay managing director Christina Caspers. “It’s a form of production and not a technical tool. That’s why creatives can use virtual production to expand their imaginary worlds and storytelling processes. This glossary helps us all speak the same language when working in virtual production.”

Dark Bay is a virtual production stage based at Studio Babelsberg in Germany. It recently wrapped shooting on the upcoming Netflix series 1899.

The database of virtual production terms contained in the glossary is made available under the Creative Commons CC-BY-4.0 license.  Additional information is available here.