The multiple Oscar-winning studio is collaborating with the streamer on two stop-motion comedies, each from a storied franchise; films to premiere in 2024 and 2023 respectively. 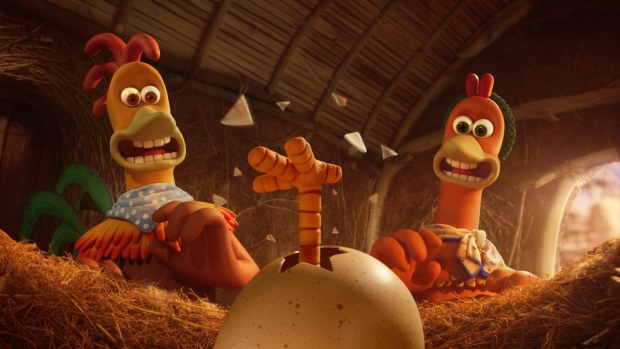 Netflix and Aardman made two major announcements today, giving us key details on the sequel to Chicken Run, and on a new Wallace & Gromit feature being made by series creator Nick Park.

Chicken Run: Dawn of the Nugget is the official title of director Sam Fell’s (Flushed Away, ParaNorman) much-anticipated sequel to Chicken Run, which in 2000 became the highest-grossing stop-motion animated film of all time. The new film will hit Netflix exclusively in 2023.

Ginger and Rocky, the first film’s plucky protagonists, will be voiced by Thandie Newton and Zachary Levi, respectively; the two stars will replace Julia Sawalha and Mel Gibson, who originally voiced the roles. In this chapter of the characters’ saga, Ginger and Rocky have built a peaceful island sanctuary for their flock after escaping the clutches of Tweedy’s farm, and they’ve hatched a little girl named Molly. But back in the human world, their fellow chickens are faced with a new existential threat -- forcing the feathered heroes to sacrifice their freedom to bring them to safety.

“When your heroes have to summon up all their resources to break into an impenetrable fortress, and those heroes are chickens, then comedy is deep in its DNA,” said Aardman co-founder and creative director Peter Lord and Netflix director of original animation Aram Yacoubian in a statement. “Thandie and Zachary [are] fabulous together, and Bella Ramsey will voice their headstrong daughter, Molly -- a true chick-off-the-old-block who completes the family trio in this new chapter.” Park’s forthcoming Wallace & Gromit film does not yet have a title. The film will open exclusively on Netflix around the world, except in the UK, where it will initially air on the BBC before it makes its way to the streaming platform.

Park will share directing duties with Aardman’s creative director of Wallace & Gromit, Merlin Crossingham. Mark Burton is set to deliver the script. Writing and storyboarding are already underway, with a 2024 release date slated for the project.

In this new installment of the iconic series, “Gromit’s concern that Wallace has become over-dependent on his inventions proves justified, when Wallace invents a ‘smart gnome’ that seems to develop a mind of its own. As events spiral out of control, it falls to Gromit to put aside his qualms and battle sinister forces… or Wallace may never be able to invent again!”