In ‘New Moon,’ a Celebrated Actor Recalls a Magical Moment in a Troubled Childhood

Emmy Award winner Colman Domingo and co-writer and co-director Raúl Domingo talk about their animated short film, dedicated to Black mothers and sons and the love that sustains them through numerous hardships, which has been shortlisted for an Oscar. 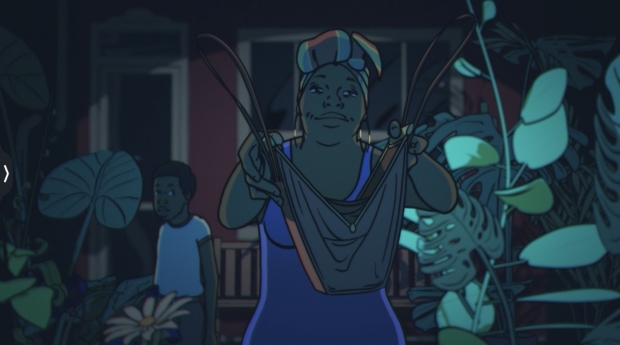 Unlike the contenders for a Best Picture Oscar, or even Best Animated Feature, which generally come from the upper echelons of the film industry and rarely offer any big surprises, films vying for Best Animated Short invariably comprise a diverse assemblage of cultures, geographies, sources, and styles. In the case of New Moon, which has been shortlisted for the 2023 Oscars, the source is an autobiographical one-man play created by Colman Domingo almost 20 years ago, long before he became an Emmy-winning actor who has appeared in such TV series as Euphoria and Fear the Walking Dead, as well as the films Lincoln, Selma, and If Beale Street Could Talk.

Written by Domingo and his creative partner Raúl Domingo, who also co-directed, along with French animators Jérémie Balais and Jeff LeBars, and produced through Domingo and Raúl’s Edith Productions, New Moon is, in the words of the filmmakers, “a short film dedicated to Black mothers and sons and the love that keeps them inspired through immeasurable hardships.” Based on Colman’s play A Boy and His  Soul, the film is an imaginative portrait of young Jay Jay and his mother Edie on a summer evening in a backyard in West Philadelphia, as Aretha Franklin sings “Daydreaming” on a transistor radio.

In the middle of that exciting, uncertain, and breathless period between the unveiling of the shortlist and the announcement of the nominees on January 24, we spoke with Colman and Raúl about the genesis of their film, and the strange, digitally mediated journey they took with two European animators to adapt a highly personal selection from the play into an emotionally and visually compelling short film.

Take a minute to enjoy the trailer before learning more about the film’s production.

AWN: What led you to create a short film from your play?

Colman Domingo: I wrote the play in 2004, when I was working as a bartender in the West Village. I was writing about things that were going on in my life, and I was also looking at how music was such a great help to me in figuring things out. When I look back at it now, I was sort of writing to save my own life, in a way. I performed it at the Vineyard Theater in New York, and in London and Australia. And then I put it away.

Then, in the summer of 2020, when the streets were on fire and COVID was raging, Raúl and I were trying to figure out how to put some good into the world, some light and love. And Raúl said, what if we took one of your stories from A Boy and His Soul – specifically the part about my mother's relationship with music. It could be almost a Disney-esque sort of message about keeping a song in your heart. My mother was very much like that. I think that's why I'm a bit of a Pollyanna.

We paid for it with our own salaries because we just wanted to put something into the world. There wasn't any thought about distribution – or the Oscar shortlist. We just created it quietly in our office with these animators, using Dropbox and lots of Zooms.

Raúl Domingo: It was a very organic process. The interesting thing is that that particular fragment, that story with Aretha Franklin singing “Daydreaming,” is sort of a pinnacle in the play. The play is very physical. It was done without any props, just Colman performing many different characters and mannerisms. But that fragment is one where you take a breath, and you listen to that beautiful song, and you take in this story about Colman and his mom, and how she's telling him about dreaming. It was just so magical because it's such a beautiful song. And the animation allowed us to just open it up and it became even more powerful. AWN: How did you arrive at the animation style and how quickly did you come to it?

CD: The animators and co-directors, Jérémie Balais and Jeff LeBars, usually work in a style that’s more fantastical and kind of dark. But we saw animation they did for a TED Talk about James Baldwin, and we were like, “These are our guys.” We told them we loved this style, and they thought the style really did match. So, we started to fill drop boxes with imagery of West Philadelphia – the row homes, you name it. But it was very important to the animators to retain the theatrical license – the string of the moon and the mother flying …

RD: Both Jeff and Jérémie, and Colman and myself, are all inspired by Miyazaki movies. There's just such a different quality to them because he truly creates on his own terms, but in such a way that, wherever you are, wherever you're from, you can understand what he's talking about. It's really about universal values, like being who you are and being kind to others. I feel that that's what we tried to do with this film. It was also really important to go with that sense of exploration, to go into different worlds, where you kind of understand the magic, but, at the same time, you get to fully inhabit all of these worlds. AWN: Tell me a little bit about the production itself. What was your process like?

CD: Raúl took the source material of the solo show and he adapted it for animation. Then every single frame was storyboarded. Raúl did all the rotoscope work because, of course, they were in France, we were here, and we're all on lockdown.

RD: The walked us through it, and they were so kind and patient, educating us about how it works in terms of the takes and the lighting and so on. This was not something that we set out to do, but it was a wonderful thing to learn. I remember when they first uttered the word “rotoscoping,” I was like, what is that? They sent us images of Cinderella being animated on top of the footage. And we were like, “Whoa, this is really great.”

AWN: How long did it take to produce? Was anybody else involved besides the four of you?

CD: The main team was just the four of us. Raphaël Pibarot, the sound designer, came on later. There were some delays because of COVID, but basically, it took two years. We finished in March of this year.

AWN: Apart from having to collaborate over Zoom and navigate the other COVID-based constraints that everybody was dealing with, what would you say were the most challenging parts of the production for you?

CD: One of the most challenging things for me was that one of our animators doesn't speak English; yet it became a great game for us learning how to communicate. Because it was animation, we often had to communicate about a feeling or a color or a tone or a mood. And those were things that transcended language, which was great. It was based on feeling, and we all knew when we arrived at this feeling. We were worried in the beginning about things getting lost in translation. But I think it became a benefit in many ways, which is wild.

RD: Another challenge was, because we were working at the time and we travel for our jobs, we had to shoot it wherever we could – in Texas, in New York, here in Los Angeles. There were practical things that we had to do to help the animators accomplish their tasks. For instance, there’s the whole opening sequence, where Colman jumps up from a chair and walks onto the stage, while turning into his mother and his younger self, Jay Jay, in one continuous shot. They told us that it couldn’t be stitched together. So we had to figure out how to do it. I had to tape the iPad to a scooter and we had to go down the street to get it in one shot.

CD: While I had to always be in the center of the frame. So, we've learned. I feel like Raúl has become a master rotoscoper. AWN: Is there anything else you want to share about the film?

CD: Personally, I just feel like it truly is a labor of love. Obviously, we're very new in this space, but I feel like we've been welcomed so lovingly by this community. I respect these craftsmen and I feel like we just joined a family.