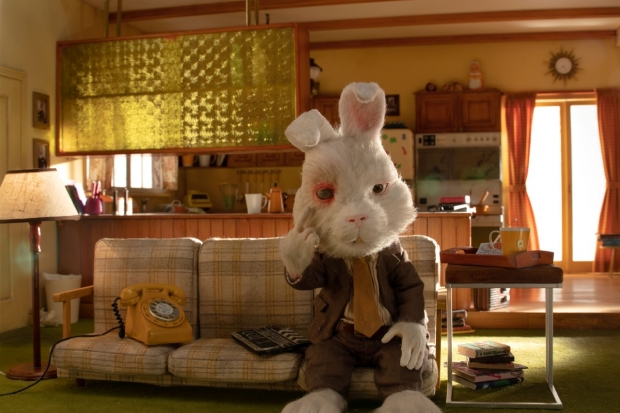 On the Oscar shortlist this year for Best Animated Short is Save Ralph, written and directed by Spencer Susser and produced by Susser, Lisa Arianna, and Jeff Vespa. The stop-motion documentary-style film features Ralph (voiced by Taika Waititi), a bunny sharing with viewers his daily routine working as a “tester” in a lab. The short also stars Ricky Gervais, Zac Efron, Olivia Munn, Pom Klementieff, and Tricia Helfer.

Produced for the Humane Society International’s global campaign to ban animal testing for cosmetics, Save Ralph highlights the industry’s cruel use of animal testing through the story of one “lucky” bunny, shining a light on the plight of countless rabbits and other animals in laboratories around the world. The short was produced in partnership with the Arch Model studio of puppet maker Andy Gent.

Asked about the genesis of the short, Susser says, “I’ve been vegan for about 9 years and have always wanted to do something to help give the animals a voice. I wanted to make a film to help people connect the dots between cruelty towards animals and food we eat and the products we use.  I thought cosmetic animal testing was a thing of the past and was shocked to learn that it is not, how extreme it is and how it’s still happening on such a massive scale – 4 out of 5 countries still do it!  The more learned about it, the more I realized this film had to be made.” Susser goes on to share that shedding light on these practices required a nuanced approach. “Ralph’s story needed to gently bring you in and get the audience emotionally invested in his story before delivering the punch,” he says. “It took many script drafts to get the storytelling right.”

A storyboard was cut together with a temp voice track before shooting began on a crude live-action version (shot on an iPhone) used for performance reference, pacing, and timing as well as for rewriting and refining the story. Subsequently, the cast’s voices were recorded and used to guide the animation process.

“In terms of Ralph, I wanted a puppet that could have a large range of emotions,” notes Susser, describing his determination to make the film as real and grounded as possible, including camera movement, sets, the dressing, and voice performances.

“I wanted Ralph’s home to look lived in, trash cans overflowing, stains on the carpets as if a hundred other rabbits lived in that house before he did,” he adds. “There are many rabbits with the same story as Ralph.” A significant challenge in the project was bringing Ralph to life in a real, tangible, and tactile way.

Susser explains, “I’m a huge fan of in-camera effects, so making Ralph in stop-motion was the only way I could see his story really landing emotionally.”

“Typically, when you show someone the reality of what happens to animals in cosmetic testing labs, instinctively, they cover their eyes or look away,” he continues. “I knew I needed to do something different to deliver the message.”

According to the director, stop-motion provided him with a sense of absolute control over the storytelling. “I love that you get to direct every frame,” he says. “Every frame is a choice, and you and the animator decide every bit of that performance. Every look, every scratch, every blink. I love making the film before you make the film.”

“Stop-motion is so time-consuming that it’s so important to work it all out before you shoot your first frame,” Susser states. “I love the magic of making inanimate objects come to life. I love the handmade human quality that finds its way into the characters and the sets. I love that every detail, every prop, whether it’s a book, trash, carpet stain, a toilet paper roll with one square left, or half-eaten food on the counter, it all needs to be thought about and created. I think it’s the ultimate creative expression.” Susser goes on to share that another challenge on the film – common to many projects produced during the pandemic – was working with a remote cast and crew located in many different countries.

“I started making the film in Los Angeles, we shot in England, I did all the post in Australia, and recorded the voices all over the map,” he reveals. “At certain times, I was working in three time zones. Never enough time in the day, but who needs sleep when you’re lucky enough to be making a film.”

Choc Chip Animation Riffs on Pop Culture in ‘The Art of Murder’
F is for Flake: The (Not So) Great Animation Robbery?
Re-VIEW: ‘Avatar: The Way of Water’ – A Miraculous Vision
‘Kung Fu Panda: The Dragon Knight’ Celebrates a Special Lunar New Year
END_OF_DOCUMENT_TOKEN_TO_BE_REPLACED