‘The Boy, the Mole, the Fox and the Horse’: An Animated Tale of Love, Friendship, and Kindness

The beautiful and compelling new hand-drawn Apple Original Film, based on the bestselling illustrated book by Charlie Mackesy, debuts on Apple TV+ December 25. 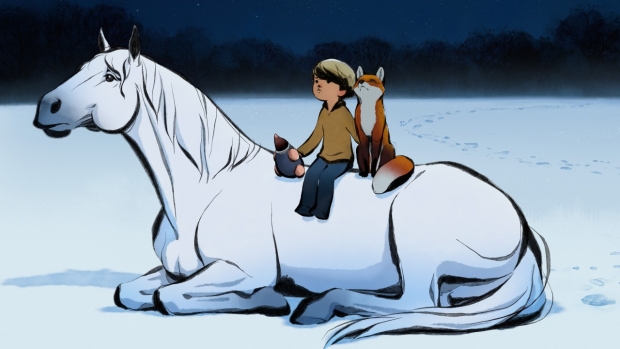 It’s just your typical literary success story: A British artist and illustrator posts his drawings on Instagram and is contacted by an editor about turning some of them into a book. Using four of his distinctive characters, the artist creates an illustrated story about love, friendship, and kindness. The book is an instant classic, topping the New York Times and Sunday Times bestseller lists, and becoming the biggest-selling adult hardback of all time.

Now, three years after its initial publication, that beloved book has been adapted into a beautiful, 2D animated half-hour short film, The Boy, the Mole, the Fox and the Horse, shortlisted in the Animated Short Film Oscar category this past Tuesday, and debuting December 25 on Apple TV+. The Apple Original Film, directed by the book’s author, Charlie Mackesy, and animator Peter Baynton (The Tiger Who Came To Tea), stars Tom Hollander (Pride and Prejudice, White Lotus, The Night Manager) as The Mole, Idris Elba (Thor series, Beasts of No Nation, Luther) as The Fox, Gabriel Byrne (In Treatment, All Things Bright and Beautiful) as The Horse, and newcomer Jude Coward Nicoll as The Boy.

The Boy, the Mole, the Fox and the Horse features traditional hand-drawn animation to tell a heartwarming tale of the unlikely friendship between the title characters as they journey in search of the boy’s home. Yet, as simple as the story is, the film, like the book, contains deep and profound insights into the things that matter most in life, offering a sorely needed message of hope in a troubled time.

Take a moment to enjoy the trailer:

While, in retrospect, it might seem that it was inevitable that The Boy, the Mole, the Fox and the Horse would find its way into animated form, in fact it wasn’t a slam-dunk. Like many authors, Mackesy was ambivalent about the prospect, and at first, he turned down a large number of offers from studios that wanted to purchase the rights.

“I didn’t create the book to make money,” he says. “And I'd always dreamt, if there was going to be a film, it had to be more than just the surface. During the pandemic, I was getting thousands of emails from people who had found the book helpful, and I started to wonder if a film could achieve the same kinds of things, but in a different format. I started to think, if the book got this kind of reaction, why not take it further? Why not bring in sound, movement, color, music to intensify what exists in the book and take it further and deeper?”

Unlike many authors, Mackesy ended up taking a major role in the film’s production, serving not only as co-writer, but also as co-director. He allows that he probably never would have conceived of, let alone undertaken, that kind of key creative position had he not first been convinced to participate in the production of the audiobook.

“Any kind of involvement of mine beyond the drawing seemed to be wrong, that it wasn't my department,” he says of his initial feelings. “But people said, ‘Why don't you read the audiobook?’ And I thought, ‘All right. I'll try.’ And as I was doing it, I had to rewrite the book because, since you can't have pictures in an audio book, I had to describe the pictures. And I realized maybe I could have some kind of role in the next stage of development, which would be the film.” Of course, this wasn’t a decision that Mackesy could make unilaterally. Fortunately, he wasn’t alone in thinking he might have something valuable to contribute to the film beyond the drawings and original story.

“Charlie was still finishing up the audiobook when we started work on the film,” says producer Cara Speller (Pear Cider and Cigarettes, Love, Death + Robots), who was instrumental in pulling the project together. “And it was a hugely reassuring thing for me to hear what he was doing with it. He'd actually approached the sound design in quite a cinematic way. It wasn't just someone reading. There was actually a structure to it and a flow to it that sounded almost like a soundtrack.”

“I wasn't sure what Charlie's involvement would be,” he relates. “But I remember listening to that with Cara and realizing that this is a man who should have creative ownership over the whole project. It was obvious, actually, that Charlie wasn't just a good draftsperson, just a good visual artist or writer, but that he had bigger creative instincts.”

Unsurprisingly, in adapting a story in which distinctive line drawings play a central role, the creators opted for a traditional 2D approach for the animation style. “I think it’s what everybody wanted,” says Mackesy. “We all agreed it should be an extension of the drawings from the book. It just felt right.”

“There's really no animation in the background paintings, particularly, apart from water, things like that,” Baynton expounds. “It's just trying to be analog about it, even though we were painting digitally. If we could get away with just a single painting and holding it as a background, then that was what we did wherever possible. And then if we needed to do camera movements, we weren't going into 3D or CG. It was all to do with what would be the equivalent of a multiplane camera, in an analog way.”

Adds Speller, “We definitely weren't interested in introducing big, sweeping camera moves or big CG wizardry into it. We wanted to retain the quiet and the gentleness that was in the book. We wanted people to really have the time, as much as possible, in the same way that they do in the book, to really examine every painting and really have some quiet within the film.” Part of what makes the film (and the book) notable is the nontraditional narrative, which is comprised largely of little nuggets of wisdom. Translating any literary work into film is always a challenge, especially in terms of retaining what makes a particular book special. In the case of The Boy, the Mole, the Fox and the Horse, Mackesy was initially concerned that there simply wasn’t enough material in the book to make a film, even a short. In any event, the challenge turned out to be exactly the opposite.

“I remember talking to [Chief Content Officer] Charlotte Moore at the BBC at the beginning of 2020 and telling her that I was afraid there wasn’t enough in there,” Mackesy recalls. “And she said, ‘Oh, there's too much. You're not going to get all that in.’ And when we were writing the film, it was a wonderful process of all of us just chipping and chopping and sawing it up and cutting and taking things out and, ‘Is this really necessary? And if we have this, is it overkill?’”

In addition to the purposively simple, timeless design and the poetic concision of the text, what also stands out in The Boy, the Mole, the Fox and the Horse is the music, which is seamlessly integrated into the whole. Whether due to budgetary or other unavoidable constraints, music in animated films can sometimes feel like a separate component that doesn’t gibe with the other elements. Mackesy and his collaborators were extremely fortunate to have Isobel Waller-Bridge – with whom the author had previously worked on the audiobook – as their composer, and to have the opportunity to interact with her throughout the production.

“When Isobel Waller-Bridge approached us before we made the film, she was already very emotionally invested in the story,” Mackesy shares. “She knew what I was trying to say, the book had made her cry, and she had it on her piano for eight months before she approached me and said, ‘Can we do something together? Can we do a stage performance of this, you and I? You can do live drawings or tell the story and I'll play the music.’ She was already processing in her entire being how it might sound. She was also extraordinarily open to suggestion.”

“It was a hugely collaborative process,” Speller confirms. “We worked on it together for about six months. It was probably the final six months of the film, but she had animatics, she had work-in-progress animation stages way before we got anywhere near comp or finalizing the film. She was part of lengthy music discussions we would have every week.” Also, as Baynton explains, it was the judicious use of music, as much as the exceptional quality of Waller-Bridge’s score, that made the film’s soundtrack so evocative.

“Actually, there's quite a lot of the film where there isn't any music,” he observes. “We were very specific about when we wanted the music to support or lift things up, or do particular things at particular points. It was all part of the idea of creating space for contemplation, and a kind of gentleness in the film.”

In sum, the animated version of The Boy, the Mole, the Fox and the Horse, again like the book, was essentially a labor of love, the goal of which was to provide the viewer with an experience that would remind them of what being human is all about. And, collectively, it was a job extremely well done.

“We were always going back to why we were doing this,” says Mackesy. “If you have a why, then how is it defined? The techy stuff is the how, but why and what are we doing this for? And the answer was similar for me for the film and for the book. It was, let's try to create something that is beautiful, but not just that, that has keys to unlock people, that gives them things.”

Choc Chip Animation Riffs on Pop Culture in ‘The Art of Murder’
F is for Flake: The (Not So) Great Animation Robbery?
Re-VIEW: ‘Avatar: The Way of Water’ – A Miraculous Vision
‘Kung Fu Panda: The Dragon Knight’ Celebrates a Special Lunar New Year
END_OF_DOCUMENT_TOKEN_TO_BE_REPLACED