Madi Piller’s ‘My Elliot:’ 24 Hours in the Life of Elliot Yarmon

Alice Walker once wrote, ‘Time moves slowly, but passes quickly.’ How do you pack a 24-hour narrative into a 3-minute film? By animating time. In conversation with the filmmaker. 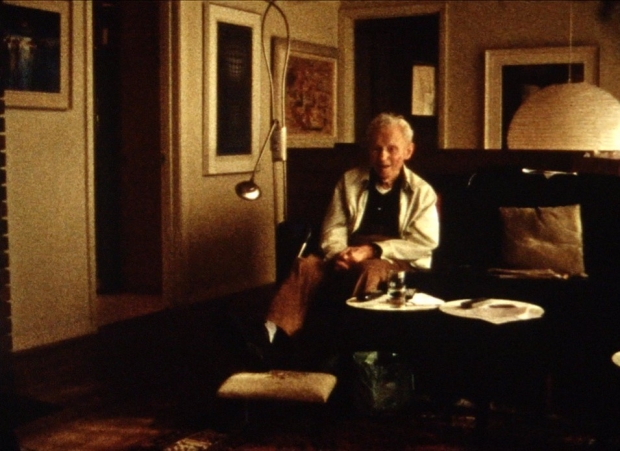 Madi Piller is a Peruvian-born moving image artist whose work is deeply thoughtful and stylistically intriguing. What decisions did she face in constructing her short film, My Elliot? I spoke with her in person and online to find out.

Madi Piller, still image from My Elliot. Used with permission of the filmmaker.

The film opens with a full hearted, touching moment as Elliot, well over 90 and struggling to walk, makes his way into the frame singing, “Oh what a beautiful morning, oh what a beautiful day… everything’s going my way.” Take a look at the trailer, then read more about the making of the film:

SK: My Elliot is a compact, loving tribute to a cherished family member. And a classic Madi Piller film because it plays with time and techniques in ways that characterize your signature style. The film opens with a splash of gorgeous aging celluloid color, the warm woody oranges generating a completely abstract moment that precedes a very representational film. A visual overture that’s accompanied by complete silence extending right into the live-action. Tell me how you came to this introduction.

MP: It’s super 8 film so it must have been the way the footage begins. It gives that atmosphere of warmth. And it’s part of that materiality that is shown on screen, quite different than just showing a sprocket. When you put a sprocket, it’s almost a signal that it’s a film but in this case these flares of light talk more about the warmth of the morning starting, and at the same time they speak as a film material. So yeah, they needed to be there. SK: And the accompanying silence that runs over both the intro and start of the film itself?

MP: Elliot was living alone and it’s the silence of that house. There is this space of silence at the beginning because that’s the way Elliot lived. His mornings were very silent, the solitude of an aging man. And then after the silence, that’s him singing. But those are recordings that I had made over a period of time and I brought them into the editing as sound memories.

SK: There are no camera moves, you set down the camera and just leave it there. And it becomes an almost impartial presence in the room, just observing.

MP: It’s a film that’s supposed to be over a long period of time. And the camera is right across from him, diagonal, I’m trying to see as much as possible of the room and where he’s moving and have him be always in the frame. I started shooting live-action (24fps) in the beginning, with the camera on a tripod, and just left it there. Then switched the mode to time-lapse and it continued shooting one frame every minute. And it was shooting all through the night and when I came in the morning to have breakfast with him, I finished the roll shooting again live-action. SK: It’s a full day and night on one three-minute Super 8 roll?

MP: Yes. And how you compress time into that one roll. It’s experimenting what I’m going to get because it’s going to be a surprise. You want to know what the person is doing all day. It’s like a security camera.

SK: We can feel your love for Elliot, it’s palpable. How did you plan for that? How are you making us feel that?

MP: It’s through the collection of recordings that I made over the years. Tom (Elliot’s son) and I as a daughter-in-law were very close to him and every time we were there I recorded little pieces of his voice with my cell phone. And when it came time to do the film, I resurfaced them. The sound is 50 percent of the film. It gives you the tone and representation of his joyful character and even his New Yorker accent.

SK: The earthy colors of the Super 8 film generate this feeling of an earlier era, perhaps the 50s, it would have been the prime of his life. And that feeling is heightened by the lounge music.

MP: The house had a décor that was pretty much the 50s. And I shot with Ektachrome daylight film because the living room had huge galleria windows and there was a lot of daylight coming in. But the daylight was mixed with interior tungsten lights and that’s what gave it the orangey look. Elliot had a very good friend who played lounge music, Paul Wurster, and Elliot loved this guy and he played the Harold Arlen songbook, and songs like “You’re the Top” by Cole Porter. And Elliot would start singing along.

SK: How do you think your experience with animation shaped this film?

MP: I like using the techniques of animation as part of my filmmaking. But I’m not trying to animate Elliot. I’m trying to animate the time that he spends within a day. How to capture all that world in a condensed way. I never studied animation, I learned from great artists, and I kind of understand where animation techniques could really help the film itself. SK: What were your most memorable moments in the making of the film?

MP: When you’re having something in mind for the film and someone enters the room when he shouldn’t. I was supposed to do the film with Elliot only and suddenly Tom comes into the frame. And he realized that he shouldn’t be intruding and steps back. These moments you’re not expecting and suddenly they turn into a great moment. The film was perfect until there and suddenly Tom comes in and it doesn’t become just a film of Elliot but there is the shadow of somebody else. And I love it because Tom was so close to his dad and it’s nice to have this little moment of him there.

Madi Piller’s films have been screened at film festivals, alternative spaces, and contemporary art venues nationally and internationally, including TIFF Wavelengths, the Festival du Cinema Jeune, Paris, Bienal de La Imagen Movimiento, Buenos Aires, and the Melbourne Animation Festival. Her films include (among many others) Not Moldova, 1937 (2019) and The Angel Outside (2019), both haunting films about cultural and historical migration. She lives and works in Toronto, Canada.

Taking an Old-School VFX Approach in ‘All Quiet on the Western Front’
‘Natural Habitat Shorts’: Like ‘Ranger Rick,’ But for Adults
Framestore Sets Sail on ‘1899’ with New Virtual Production Tools
Animated Characters: The Art of Babbitt – Part 1
Bruce Smith and Ralph Farquhar Talk ‘The Proud Family: Louder and Prouder’ Season 2
VFX is the ‘Thing’ for Tom Turnbull on Tim Burton’s ‘Wednesday’
We Need to Chat
F is for Flake: The (Not So) Great Animation Robbery?
END_OF_DOCUMENT_TOKEN_TO_BE_REPLACED