In a wide-ranging interview, the acclaimed, Oscar-winning director shares insights into his stop-motion masterpiece, now streaming on Netflix, and the wonders of the creative process. 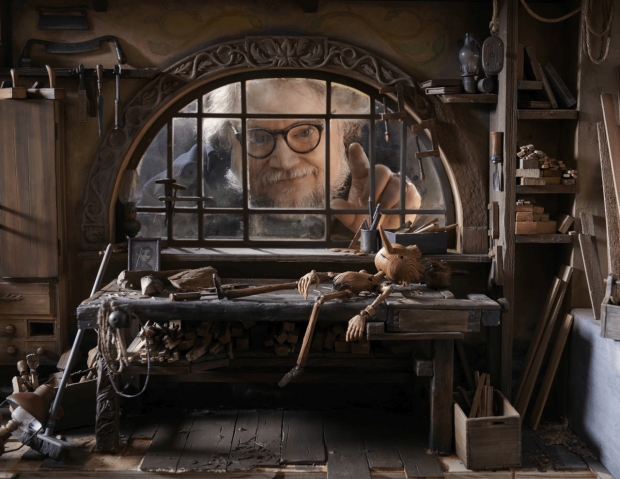 A universally acclaimed, lavishly awarded director, Guillermo del Toro is perhaps unique in consistently making films that are both immensely popular and invariably surprising. It’s a fairly sure bet that whatever he turns his hand to will be not only masterful in its execution, but different from anything else out there, often including his own previous works. Thus, it’s hardly unexpected that del Toro’s take on the classic, and oft filmed, story of the wooden puppet who becomes a real boy is not only visually breathtaking but plumbs thematic depths that elevate it to a different realm.

Co-directed by del Toro and Mark Gustafson (Fantastic Mr. Fox), with a screenplay by del Toro and Patrick McHale (Adventure Time), Guillermo del Toro's Pinocchio is a tour de force of stop-motion animation that was 15 years in the making and, now that it has finally arrived, has more than lived up to both its creator’s and his fans’ expectations. We spoke with del Toro about his creative process, the nature of animation, and the faith that kept him going throughout his long journey to the screen.

AWN: As most people probably know, this project was years and years in the making. How did you manage to persevere through that seemingly endless process?

Guillermo del Toro: It's funny, this whole journey, at the end of the day, consumed roughly half of my career. And many, many times we thought it was not going to happen. But it just takes one “yes” to transform reality and make it possible for us to share it. And every idea that made it hard to finance is an idea that made it worth making. It was a great partnership of hundreds of incredibly talent animators, ShadowMachine, Pat McHale and Mark Gustafson. It needed all of us.

AWN: In other interviews you’ve done for Pinocchio, your honesty and frankness in discussing the film – as opposed to simply giving highly prepped and polished answers – has really stood out. Do you feel that candidness has been rewarded in coverage of the film? GdT: Sometimes it happens, sometimes it doesn't; but you have to do it every time. We flew under the radar a lot more with Nightmare Alley, but we responded in the same way. Because ultimately, in the 30 years I've been making movies, I have tried to make, not a filmography, but a biography. And, once people are exposed to this earnest truth on the screen, the only thing that you can do when you meet in person is to continue that truthfulness. Likewise, in my audio commentaries on DVD and Blu-ray, I always talk about the good and the bad. Because I know, for many people, like me when I was a kid, you listen to that and you say, "Oh, so this went wrong and this is how they solved it," as opposed to everything is perfect and nobody made a mistake.

I often define directing as a hostage negotiation with reality. Everybody talks about the director as though they’re some kind of God, which couldn't be further from the truth. You are a captain on a ship in the middle of a hurricane and it's “how many of these lobster cages am I going to lose and how many sailors can I save?” That's directing.

AWN: After all that you went through to get it made, is the final film close to what you originally envisioned?

GdT: Better. Because ultimately everybody brought their A game. I frankly was amazed and moved about everybody being at the top of their game the whole time. You are not patching holes from somebody just phoning it in. Everybody was, "This is a matter of life and death." Over almost a thousand days of shooting, I kept repeating one mantra, which I believe: "We are only as good as our worst shot." The whole movie lives and dies not on the most wonderful achievement, but in the failure to deliver.

AWN: You're known for stellar design across all your films. How long did it take for you and your team to design the characters and the sets, and was there any difference in that process for stop-motion, as opposed to live-action or other animation styles? GdT: The process of design is the same in all mediums. We make a color chart of the movie. We make a flow chart of the colors. We make a sort of bible of shapes and colors and what they mean. We spend the same time designing in stop-motion as in live-action because everything needs to be sculpted three-dimensionally. It's always the same, and it takes months – many, many months. This movie took 15 years to get to the screen; production and pre-production were at least about five years.

AWN: You're so adept at working both in animation and live-action. Is there any crossover effect? Does working in animation make you a better live-action director and designer, and vice-versa?

GdT: Yeah, 100 percent. There is no position that a director can’t learn from. You are a better director if you are an animator, you are a better director if you're a good cinematographer or a production designer. It doesn't matter. That's why I always believe that directors cannot get bored in this world – because they should always be learning. They should be looking at people on line at the DMV – at wardrobe and attitudes and positions, everything.

And live-action, the way I do it, is already a calculated effort. I mean, all my movies are full of built sets. They're not naturalistic. They are full of creatures that require huge technical achievements. And all my life, I've done stop-motion. I was doing stop-motion in my Super 8 films. I had a company that did it professionally for 10 years. And I studied makeup effects under Dick Smith. That prepared me to tackle the creatures in my movies. It's an interdisciplinary job, director.

AWN: Was there ever any thought about doing Pinocchio as live-action or a different style of animation? Or was it always going to be stop-motion?

GdT: We never considered any other medium. Because look, you have a pinnacle of 2D animation in the Disney film, and you cannot pretend that you're going to be able to trump that. You can’t even get close. But stop-motion – yes, we can carve (pun intended) our own niche. They can actually stand side by side because they are both animation, but different kinds. Stop-motion is so much more tactile, much more like a miniaturist's work, and it's moving in a different way than 2D. And it's also the ideal medium to animate a puppet. The entire cast is puppets. AWN: And it’s also a live-action film, in that things move around in the real world.

GdT: That's exactly right. I've been saying that stop-motion is to live-action what Ginger Rogers is to Fred Astaire, because we do the same steps as him, but backwards and in high heels. And it really is like that. It should be appreciated that way – because we are not doing exaggerated acting like pantomime. We're doing very naturalistic, very delicate acting with the puppets.

AWN: Does animation provide creative opportunities for you that live-action doesn't?

GdT: I've been a student and a collector of animation all my life. It is, for me, an act of creation that is very different. Because, in live-action, you sort of orchestrate over very, very unpredictable vectors to try to provoke a – quote unquote – accident. An actor fumbles a line, a car goes by at the wrong moment and the actor [in Midnight Cowboy] slams the trunk and says, "I'm walking here, I'm walking." An actor improvises the line, "Are you talking to me?" Something happens and you capture it.

In stop-motion and in animation, you have to preplan the “accident.” When Geppetto tangles with a balloon in the abandoned empty theater, you have to have the balloon in a rig, Geppetto in a rig. You have to put on the exposure sheet what you're going to shoot that day. It is impossible for us to just improvise. So, it’s about the exercise of control. Directing is like fishing for a big fish. You have to negotiate between reeling in and releasing in order to keep the thing alive. And the rhythms of this are different in live-action and in animation, the rhythms of control. AWN: In a film that took 15 years and a thousand days of shooting to make, what, in retrospect, would you say were the biggest challenges for you?

GdT: Finding the right partnerships in order to produce it and direct it and write it. And recruiting the right sort of magnificent animators to take the task seriously and not hurry it up. And finally, the most difficult thing was to control the tone of the film, because it's a movie that can grow from comedy to drama, to fable, to political satire. There are so many strands in this film. It took every ounce of experience from two directors, Mark Gustafson and me, with 30-40 years in the business, to control the tone of that movie. That's really, really hard.

But that's where the animators really help you carry the load, because we’ll say, "You're going to have Pinocchio do this, Pinocchio do that." We encourage them, "If you need to try something different from what you are being instructed, please do it. Feel free to fail." And then you're not going to see them for three, four, five weeks or more. They're going to go away and deliver that shot. You don't supervise what they're doing every day. You let them have their space, and that's where you can actually breathe. And the next day, you launch new shots, and you open shots that were done in the course of all those weeks, and you applaud, or you make a correction and say that we have to redo it. We redid from scratch about 30, 35 shots, which is a very low average – which means that the animators were doing an excellent job.

AWN: What lessons, if any, did you learn on this film that will help you in your next projects?

GdT: I think that it's very encouraging when you see a movie that plays the same way every time you watch it, and you realize that the instincts that gave birth to a project were right. Our profession is based on a long-term investment. We have the 10,000-year stare, or the 10,000-mile stare. I started staring at this movie before almost anyone climbed onboard. And, frankly, the film landed emotionally in a very, very beautiful bullseye. It’s almost like somebody looks at a landscape and says, "Yeah, a city would look really good here." And now we're in the city chatting about it. At the age of 58, after 30 years of doing this, it's really, really great to know that it's happened again.

Taking an Old-School VFX Approach in ‘All Quiet on the Western Front’
‘Natural Habitat Shorts’: Like ‘Ranger Rick,’ But for Adults
Framestore Sets Sail on ‘1899’ with New Virtual Production Tools
Animated Characters: The Art of Babbitt – Part 1
Bruce Smith and Ralph Farquhar Talk ‘The Proud Family: Louder and Prouder’ Season 2
VFX is the ‘Thing’ for Tom Turnbull on Tim Burton’s ‘Wednesday’
We Need to Chat
F is for Flake: The (Not So) Great Animation Robbery?
END_OF_DOCUMENT_TOKEN_TO_BE_REPLACED