Beautifully animated, award-winning 2D short celebrates the long-suppressed, centuries-old story of Waikiki’s mysterious four-boulder monument to the gentle people, both male and female in mind and body, who brought science and healing to the island. 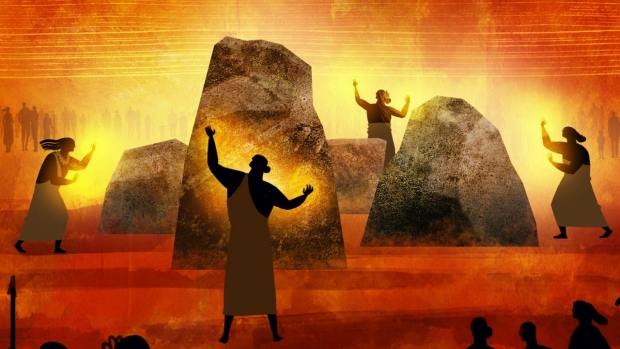 Attracting over 4 million visitors every year prior to the COVID pandemic, Oahu’s Waikiki Beach is famous for its hotels, white sand beaches, and 9-foot-tall bronze statue of Hawaii’s surfing legend and famed Olympic swimmer, Duke Kahanamoku. But another, more mysterious monument, made up of four large boulders, also rests on Waikiki’s oceanfront, its significance long unknown to visitors and even locals. Titled “Nā Pōhaku Ola O Kapaemahu A Me Kapuni,” or “The Stones of Life,” the monument, though erected in 1997, has a history on Waikiki that spans six centuries, its story tarnished, changed, and suppressed over time.

But the award-winning animated short film, Kapaemahu, is changing all that, revisiting, revitalizing, and celebrating the true magic and meaning behind the stones.

“There was a lot of effort to peel away the layers to uncover what had been hidden for so long and intentionally suppressed,” says Joe Wilson, a writer, co-director, and producer on Kapaemahu along with partner Dean Hamer and lead director Hinaleimoana Wong-Kalu. “This film is a great metaphor for calling us all to try to see what's in front of us and understand it more deeply than just what's on the surface.”

The eight-minute 2D animated short takes place in the 15th Century, as four tall, deep-voiced, gentle Mahu - individuals who are a mixture of both male and female in mind, body, and spirit -sail from Tahiti to Hawaii and introduce their gifts of science and healing to the inhabitants of Waikiki. The Mahu are in-turn gifted by the islanders with a monument of four boulders in their honor. After transferring their powers into the stones, the Mahu disappear. As time passes, foreigners inhabit the island and wars rage; the once sacred and revered stones, and their story, are forgotten and buried under a bowling alley in 1941. Though the stones are recovered in the 1960s and placed back as a monument on Waikiki 37 years later, their true story was not fully recovered. But the power of the Mahu still calls out to those who pass by and are willing to listen.

Winner of the Atlanta Film Festival’s Best Animated Short Award, the Grand Jury Award at Animayo, the Audience Award at Outfest, the Special Jury Prize at Hiroshima International Animation Festival, and many others, Kapaemahu is now an Oscar contender. Wilson and Hamer are both award-winning documentary filmmakers, known for their films like Leitis in Waiting (2018) which highlights transgender stories in the Pacific. They first began thinking of an animated film surrounding the story of the stones 10 years ago while working on a documentary film, Kumu Hina, about their fellow Kapaemahu director Wong-Kalu, a native Hawaiian teacher, cultural practitioner, and Mahu who “grew up being taught that Mahu, the concept of it and the understanding of it, was not something to be proud about.”

“I grew up learning that being Mahu was bad by direct and indirect comments, and inferences and looks and glances and being referred to negatively as ‘Mahu,’” remembers Wong-Kalu. “And the culmination of all those life moments that you'll never forget - and I will never forget them - made me feel less than. I look back on this journey and there are still times where I feel that little tremble, that quiver, because I remember the hurt that was associated with the word. It was not until after I graduated high school that I began to learn the rightful history of the Mahu and the stones I grew up laying on at the beach as a child.”

Mahu, and Mahu entertainers in particular, were demonized in the 1960s; when the historic stones resurfaced, the Mahu were completely erased from the story. That is, until Hamer, Wilson, and Wong-Kalu discovered a handwritten manuscript from 1906 - describing the story of the stones - at UH Mānoa’s Hamilton Library in 2015, conveyed by James Harbottle Boyd, a member of the Hawaiian nobility and close confidant of Queen Liliuokalani. It was written by Thomas Thrum, who later published the story in the Hawaiian Almanac.

“We felt secure that we had found at least the most authentic story that had been passed down by the elders,” says Hamer. “But unlike our documentary work, our story is not about people we can go to for an interview. That's what drove our move to animation; the film grew very organically from there.” Academy Award-nominated animation director Daniel Sousa, known for his earthy and mythical animation styles in shorts like Fable (2006) and Feral (2012), was brought onto the Kapaemahu team to bring new, sun-kissed animated life to an ancient story. From golden sands and a glistening green and orange ocean to the rust red tones of the islanders, Kapaemahu’s whole canvas represents the saturated sunsets of Hawaii; the film is accompanied by narration from Wong-Kalu in Olelo Niihau - the only form of Hawaiian that has been continuously spoken since before the arrival of foreigners - and chants by contemporary Hawaiian music composer and performer Kaumakaiwa Kanakaole, who also identifies as Mahu.

“It was an amazing opportunity to create this very lush and beautiful world based on traditional Hawaiian and Polynesian art patterns, and to try to step inside the skin of people from that time period,” says Sousa, who drew inspiration for the animation’s rough textures from Hawaiian tapa cloth and even from the stones themselves. “Dean and Joe provided a wealth of photographic references, and we tried to create these characters that were very statuesque and infuse every part of the film’s landscape with that stone texture and richness as well.”

“The biggest challenge was the joint effort of trying to create a story that connects with the audience on a human level,” he adds. “The original story, in a way, is pretty dry; there isn't much there. And we're trying to flesh out these characters so that we can relate to them and sympathize with them.”

That is one of the reasons Wong-Kalu was used as a model for the Mahu characters Sousa created.

“In doing a film that's either going to be sensitive or contentious, you can't just expect to call upon somebody else to be your poster child, or to be your model from which you derive your images and storylines,” explains Wong-Kalu. “You have to be willing to put yourself out there. Being the kind of storytellers that we native Kanaka are, we do best when the story is reflective. So, the fact that my image was used and having this story parallel my own life in 2020, that I, too, would have a healer come from the southern islands and heal my life in ways that I could never imagine, it was a really wonderful process.” Sousa says he also derived inspiration from Henry Moore sculptures for their portrayal of, as he says, “very large female figures, broad shoulders, with a kind of imposing presence with very small heads, that feel almost like superheroes.”

It was a risky choice that Wong-Kalu says, in the end, elicited a powerful and positive image for the story and the characters. “From the perspective of male to female transgender, the very elements that make you more masculine or more manly, are the things that you try to either tone down or do something about, so that it's not glaring in your face,” she notes. “When I first saw the larger-than-life superhero images of those people with larger framed bodies and smaller heads, I was thinking, it emphasizes all of the things that we in the Mahu community sometimes fear and run away from the most, or that make us think ‘Oh my goodness, here we go again.’”

She continues, “But as we went on with the character design, I realized that the way they were being drawn is exactly the way they were meant to be, because these are larger than life people and the memory of their names exists in large stones. You can't get any more honor than that, to have a great stone represent your story and represent your name.”

Sousa believes animation also provided an avenue for the Mahu character traits to represent more than just their physicality. “Another thing that separates animation from live-action is that it's a kind of a metaphoric space,” he shares. “So, when you create a character that looks larger than life, you're saying something more about their interior being than what they look like physically. These characters look larger than life because their souls are larger than life. If you did this in live-action, it wouldn't have come across that way. So, it's very specific to this medium of storytelling.” Wong-Kalu also inspired Sousa’s suggestion to Wilson and Hamer that the story be told through the point of view of a child, speaking to both Wong-Kalu’s profession as a teacher as well as taking the opportunity to touch the hearts of younger generations.

“I think that was really a great breakthrough,” says Hamer. “Hina is a teacher, so we thought this would be a great way to capture her passion for children, and it was in the back of our mind that the child in this film would be based on one of Hina’s own students.”

Kapaemahu’s positive impact on young children has already been proven. Among its many awards, the film was nominated Best Children’s Film at the Ottawa International Animation Festival and won the Children’s Jury Award from The Chicago International Children's Film Festival. “What better judges than young and innocent minds that have yet to become jaded by the ravages of aging and time,” says Wong-Kalu.

But still, it’s not the awards by which Wong-Kalu and the team measure the film's success. “What means more to me than winning any award is that the film is resonating with children,” explains Wong-Kalu. “I care about two primary things: that my work uplifts the name of my islands and my people, and that paramount to any award or being featured at any festival, that just one person finds some value, some merit, or sees themselves in the film and helps them to be closer to their truth.” In June of 2022, Kapaemahu will be the centerpiece of a major exhibition at the Bishop Museum in Honolulu, exploring the contemporary history of Nā Pōhaku Ola Kapaemahu and related themes. The team is also trying to make their animated short available in tourist centers, on TVs in hotel rooms, and on Hawaii airlines.

“Many of us who grew up in marginalized communities rarely or never get to see ourselves reflected in our society,” says Wilson, he, and Hamer, both being gay men. “We’re erased from history and are told, day after day, that we don't belong. The symbolism of this animated story is told in a grand and beautiful way. That’s because that history has been invisible for so long; it needs to be seen so that it has an impact, and so young people or families with young people who fit somewhere in this invisibilized gender spectrum can see themselves out there and see their future possibilities, because there is a culture that has a place for them.”

Wong-Kalu adds, “Kapaemahu is about teaching, it's about youth, and it's about the next generations. This entire story is a mirror of my journey as well and when I reflect now, looking at the final product, if there's anything that I want shown after I pass from this earth, at my funeral, it would be this animation.”