‘Star vs. the Forces of Evil’ Unleashes First-Ever Gay Kiss from Disney

Subtle background art showing a range of couples kissing during a romantic moment at a concert helps usher in a brave new world for the Mouse House. 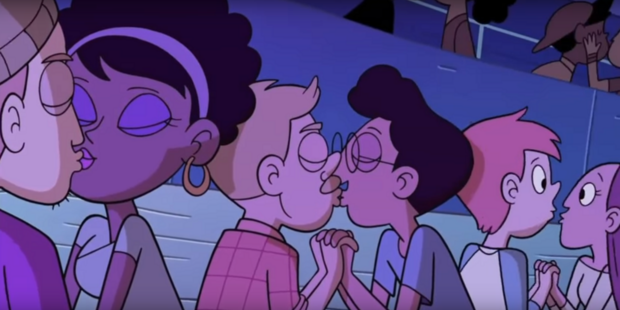 It’s a brave new world in 2017: Conservative politicians are coming out in favor transgender bathrooms. Moonlight won the Oscar for best picture. And, now, Disney has included its first gay kiss in a cartoon, showing that the studio just might be transitioning to a more inclusive position about on-screen representation of the LGBTQ population.

On February 23, Disney XD aired an episode of Star vs. the Forces of Evil entitled “Just Friends,” which featured the main characters attending a concert. When the charismatic boy band performs a romantic song, the venue full of concert-goers starts kissing, including several same-sex couples apparent in the background.

As outlets such as A.V. Club and Mashable have pointed out, Disney has taken steps over the past few years to include more LGBTQ-inclusive material in its various shows. In 2014, Disney Channel’s Good Luck Charlie aired an episode that featured a lesbian couple bringing their kid over for a play date. In 2016, during the final episode of fan-favorite series Gravity Falls, it was confirmed that that two of its recurring characters were in a same-sex relationship -- although there was no on-screen smooching, heteronormative or otherwise. Finally, last fall, Moana directors Ron Clements and John Musker told the Huffington Post they wouldn’t rule out an LGBT Disney princess. “It seems like the possibilities are pretty open at this point,” Clements said.

Meanwhile, the Los Angeles Times is reporting that the forthcoming live-action remake of Disney’s animated classic, Beauty and the Beast, will feature the studio’s first “exclusively gay moment” in film. In an interview with British magazine Attitude, Beauty and the Beast director Bill Condon, who is openly gay, said manservant LeFou, played by Josh Gad, has “a nice, exclusively gay moment” in the movie, which opens in the U.K. on Thursday and arrives in the U.S. on March 17.

“LeFou is somebody who on one day wants to be Gaston and on another day wants to kiss Gaston,” Condon reportedly continued. “He’s confused about what he wants. It’s somebody who’s just realizing that he has these feelings.”