Finding Light in the Darkness - Four Films by the NFB: Altötting, I, Barnabé, 4 North A, and The Great Malaise

The tumult of our current lives will pass - art remains a beacon of hope amidst the chaos, exemplified by four new animated short films from the National Film Board of Canada. 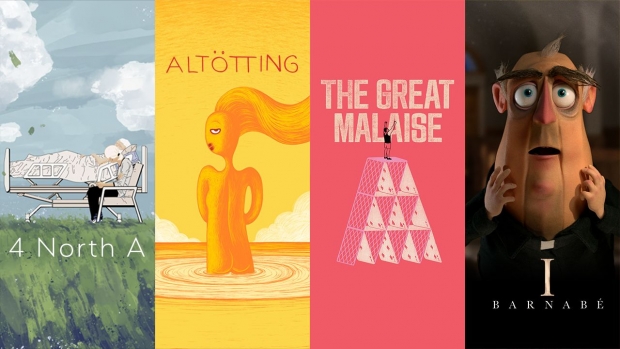 There is a crack a crack in everything
That's how the light gets in.

To say that we are living in a rather turbulent, chaotic, and confusing period would be a gross understatement. Still, we’d be a bit naïve to believe that this era is somehow unique in human history. Pandemics, misinformation, and power-mad politicians are not the exclusive property of our time. This period, like others, will pass. There will be pain and loss, but also growth. Art will be one of the beacons of light in that darkness. One only need look at four new animated short films from the National Film Board of Canada (NFB).

Andreas Hykade’s Altötting (a co-production between Studio Film Bilder, the NFB and Ciclope Filmes) is a tender reminiscence of a boy’s complicated attraction to the Virgin Mary. The film has screened at the major animation festivals, taking home a Grand Prize from Portugal’s Cinanima Festival and Best Script from the Ottawa International Animation Festival (OIAF).

Jean-François Lévesque’s I, Barnabé (an NFB production, with the participation of ARTE France), a sympathetic and warm story of a priest struggling with his spirituality, screened at Annecy, won the Best Technique Award at the OIAF and took home Best Short Film at Valladolid.

Jordan Canning and Howie Shia’s heartfelt 4 North A, about a woman sitting at the bedside of her dying father, has stirred audiences at TIFF, OIAF and other festivals as it begins its festival journey.

The Great Malaise, Catherine Lepage’s debut film, is a playful and delicate take on depression and anxiety. At its premiere at Les Sommets du cinéma d'animation, it won both the People’s Choice Award and the Jury’s Special Mention. Lepage’s film also screened at the Berlinale.

This powerful quartet stand out for their technical and stylistic inspiration and their timeless, universal themes of mortality, spirituality, anxiety, and identity. Despite their unique techniques, voices and origins, these films feel loosely connected as they consider our place in the larger scheme of existence. Altötting, by Andreas Hykade, explores religion and spirituality from a personal viewpoint. Drawing on his childhood in the Bavarian village of Altötting, where there’s a shrine to the Virgin Mary, Hykade remembers his younger infatuation with the church and specifically Mary. Eventually he discovers the horrid truth behind the Virgin Mary’s eternal beauty and realizes that it’s time to move on from the illusions of his youth.

Fans of Hykade’s work will immediately recognize his distinctive minimalist design and deadpan humour. Throughout his career, Hykade has jaunted back and forth between restrained and uncluttered work (e.g., Nuggets) and more conceptually and visually elaborate works (notably, We Lived in Grass and Ring of Fire). In Altötting, Hykade bridges these worlds by weaving his iconic design with flourishes of bold, opulent beauty into a deeply personal yet timeless and hopeful story of lost innocence.

One of the most chilling and powerful moments in Altötting occurs when the Virgin Mary reveals her dark secret to the boy (now a young man). In creating this intricate scene, Hykade turned to award-winning animator Regina Pessoa (Uncle Thomas). Rather than attempt a copy of Pessoa’s distinctive engraving technique, Hykade went right to the source. “I needed Regina’s contribution,” adds Hykade, “so that she could put her holy scratches on top of the animation. Now, it’s quite magical and alive.” I, Barnabé by Jean-Francois Lévesque (who’s previous NFB film was the 2008 stop-motion short The Necktie) tells the story of a priest who has lost direction in a world that has turned its back on religion—and with that, spirituality. This technological wonder (fusing stop-motion, computer, drawings, and experimental techniques) explores Barnabé’s existential meltdown via the figure of a rooster who appears to him during a day of drinking. What is left in a world where people have left the church and the notion of deities in favour of rapid, material satisfaction?

I, Barnabé (which took more than seven years to create) is a dense film open to multiple interpretations. It can be read as a nervous breakdown, a loss of identity, a portrait of addiction or about how we need to acknowledge our so-called “dark side.” But ultimately, it comes back to a human being in need of an existential recalibration.

Interpretations aside, the film is a visual feast. There are puppets, drawings, a beautiful stained-glass sequence, and a technique that involved filming fluids as they’re poured into a glass tank. As different as each technical approach is, they all fit seamlessly into the narrative.

Particularly impressive is Lévesque’s use of lighting. I, Barnabé’s lighting technique involved individually exposed lighting passes (ranging from 5-12 passes per shot!). With each repositioning of the puppet, the lighting was also adjusted. This enabled Lévesque to later adjust the lighting on each scene without having to re-animate. 4 North A, by Howie Shia and Jordan Canning, seems like an odd collaboration. Shia is an established animator who has worked with Disney and Nike but has also made films with the NFB, including Flutter (2006) and the award-winning BAM (2015).

Canning is best known as a live-action writer and director (We Were Wolves). She’s also directed episodes of the hit Canadian TV shows Schitt’s Creek and The Baroness Von Sketch Show.

Surrounded by sounds from hospital corridors and the cries of grieving strangers, a woman sits alone in a hospital room with her dying father. As the woman struggles with her emotions, she drifts back and forth between her antiseptic present and a series of bittersweet memories from her childhood. Inspired by Canning’s own experiences, 4 North A is deeply personal yet instantly relatable to anyone—especially during a pandemic—who has experienced illness or loss.

What stands out in 4 North A is its quiet yet expressive soundtrack (created by Sacha Ratcliffe) that captures, and somehow humanizes, the cold, mechanical sounds of the sterile hospital setting.

Visually, Shia’s striking but subdued design swings between the pale palette of the hospital environment and the livelier, painterly landscapes of the woman’s childhood memories.

4 North A is not easy on the heartstrings, yet there is an abundance of optimism to be found through the tears. The film is about loss, but also about finding comfort in others. Even during our toughest moments, we can still connect and comfort each other. A playful meditation on depression and anxiety, Catherine Lepage’s The Great Malaise originated as a series of graphic novels. Lepage worked as an illustrator and graphic book author before turning to animation to adapt her books.

The Great Malaise (Trailer 00m30s) from NFB/marketing on Vimeo.

The Great Malaise follows an initially confident young woman’s voice as she speaks of her poise, success, hard work, and ambitions over a series of images that match her self-assurance. The images soon become out of sync as the voice slows, cracks, and hesitates. By the final image, all that hopeful, cheery, and exuberant self-confidence has collapsed into darkness and self-doubt. Based on Lepage’s own struggles with depression, The Great Malaise is a timely reminder that happiness has little to do with material success.

These films, despite their melancholic tendencies, are united by optimism. They gently encourage us to step back, take a deep breath and re-evaluate our priorities, while reminding us of the importance of genuine connection, not with screens, but with people, nature and ultimately, ourselves.