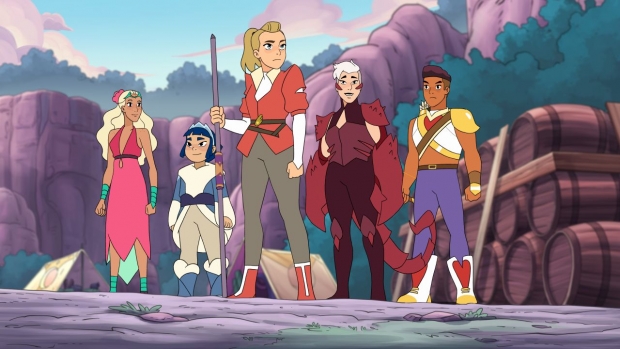 With the fifth and final season of the critically acclaimed Netflix original animated series, DreamWorks Animation’s She-Ra and the Princesses of Power, launching today, audiences will finally learn how creator, showrunner and executive producer Noelle Stevenson wraps up her groundbreaking show that chronicles the ongoing adventures of Adora / She-Ra and her band of magical princesses. In Season 5’s epic conclusion, unexpected adversaries are confronted, and relationships are tested, broken, and changed forever. Will Adora and the Princesses of Power be able to save their planet? Or will the universe succumb to the evil might of Horde Prime before love can conquer hate?

“I am just really, really, really excited for everyone to see this season,” Stevenson says. “It’s the culmination of everything we've been working on for close to five years now. Of course, there are some mixed emotions with having to say goodbye to this world and these characters, but I feel really lucky to have gotten to tell this story in this very self-contained way. I hope everyone finds the new season very satisfying. There's a little bit of that bittersweet, time-to-say-goodbye feeling, but mostly, I'm just happy it’s out there for everyone to see.”

One of the few shows that has pushed past stereotypical “cartoon girl-character” narratives, She-Ra has also blazed important trails in how it has embraced LGBTQ representation. Stevenson created a world that wasn’t bound by real world cultural conventions. Her characters were free to express themselves as they wished, to love whom they wanted; they’d be accepted as natural, not as talking points or sources of concern. “This last season, we really wanted to spotlight queer characters and queer relationships,” she shares. “And seeing the response to the first season, that helped so much. At first, we were like, ‘Oh, are people going to respond well to this?’ Honestly, because a lot of times we had to be subtextual, the question was always, ‘Are people going to pick up on this?’”

“The first season came out and people immediately understood what we were going for,” she continues. “Even down to the subtlest moments where we couldn't be as outright as we wanted to be, they picked up on it and ran with it. And that really, really changed everything for us. But we’re also seeing other shows that are able to go farther and farther, be more upfront and outright, less subtextual and more central to the story. And I am very, very heartened by that. It's a really exciting thing to be a part of.”

Stevenson notes the gradual changes she’s seen in how such characters and storylines have become accepted by audiences over the course of the show’s five seasons. “There’s been a huge change,” she states. “And I think we are only a part of that change. But, in the time since we started making the show, there's been a huge shift. This [LGBTQ themes] was something I was deeply passionate about including in the show, and at times, met resistance on. It wasn't always clear what the decision would be or what we would be able to do. But since the first season of She-Ra came out, and since other shows have been making incredible strides in this area as well, it feels like things are changing right in front of our eyes. And it's not that that fear isn't there anymore from the studios and executives.”

One key component of Stevenson’s ongoing efforts to tackle complex themes, characters, and storylines has been her insistence that the show remain accessible to kids. “No matter how complicated the themes were that we delved into, or when they were darker or even scarier, we never forgot about children as our main audience,” she explains. “The temptation with a reboot of a really popular sci-fi fantasy project like this is to go more nostalgia-based or aim for a more adult audience. But I wanted to make sure that it spoke to a really broad all-ages audience, that it was something parents who are fans of the original She-Ra could watch with their kids. And their kids could have their own experience with She-Ra, as well as adults who didn't have kids, or teenagers, or any number of people from different backgrounds; everyone could watch and enjoy the show for different reasons.”

When it came to how the show presented gay characters, Stevenson was determined that they never talk down to kids; kids can handle more complex issues and themes than we give them credit for. “I don't believe in talking down to kids,” she states. “I don't believe in trying to sanitize things, because kids really do understand complicated themes about relationships between characters, seeing representation of gay characters, the complications of what it really means to follow your heart and for friendships to be the most important thing. You might see those things in other children's shows, but we wanted to dig below the surface and really get to the heart of those issues, about how friendships can be really difficult, and how following your heart can be really confusing and hard. And it doesn't always go where you want it to go.” For Stevenson, one of the most satisfying aspects of the show has been how they’ve presented girl characters in ways not normally seen on TV. Generally unsatisfied with how girls were portrayed in shows she watched while growing up, she was determined to show a much broader range of realistic, believable women characters. “Specifically, with girls, the media tends to sand them down to make their characters neater,” she says. “Growing up, I felt unsatisfied by some of the stories I was getting, because it seemed like the characters didn’t really struggle with their own flaws and shortcomings. They were always very good. Everything they did was very good. It seemed like they were aspirational to the point that they never made the wrong decision. They were aspirational to the point that I didn't relate to them. Aspirational characters are important, but when the characters never really fail, they never show a sense of vulnerability or inferiority in their own personality.”

Characters who can’t fail don’t have to face the results of bad or painful decision-making. In She-Ra, the characters love and lose – they don’t always win or solve their problems. “When characters can’t fail, it feels like, ‘Oh, some people just have an easier time of it than other people.’ So, I definitely thought that for some people in real life, it was just easier for them. It was easier for them to make the right decisions; it was easier for them to get love and have love. I didn't really see a lot of female characters having to deal with doing the wrong thing. And so, while I wanted the show to be about the power of friendship, about how to be strong and how to be brave, I also wanted to show how friendship is also really, really hard.”

“Friendships are really scary sometimes,” she adds. “And losing a friend or losing a relationship is one of the most painful and difficult things you can face. I think kids know that very well. Any kid who's ever lost a best friend...I remember being 12 and my friend telling me she didn't want to be my friend anymore. And to this day, it still hurts more than any breakup I've ever had. It was excruciating. Kids do understand how hard friendship can be and how scary it can be to be vulnerable with another person.” According to Stevenson, She-Ra shows that personal growth and being strong are not just about pushing ahead and persevering. They’re also about trusting others to help us when we need it. “What happens when you try your hardest and you still fail?” she asks. “With She-Ra, we were determined to show what comes after that, that you can get back up, that the people you love will still be there as long as you ask them to be…when you’re giving them your love as well and being vulnerable with them. It's not the end of the world when you fail. And it's not something that has to be final. You can get back up and keep fighting. No matter how many times you fall down, it's not the end. Strength is not always what we think it is. It's not where you just keep pushing through and finding more strength. You need to rely on the strength of others as well, even when you fall.”

Reflecting on the deeper themes of friendship, love, strength, and bravery she brought to her corner of the Masters of the Universe world, Stevenson hopes her efforts open up opportunities for the character of She-Ra in future MOTU projects. “We're about to see several other explorations in the Masters of the Universe world, and I'm excited to see if She-Ra appears, and how she’s portrayed,” she says. “In the past, the projects have been almost exclusively focused on He-Man. She-Ra got her own world and her own story, but He-Man still factored pretty heavily into that story. But She-Ra didn't appear in He-Man, and that’s something I hope to see in the future, whether or not her character is portrayed like we’ve done. We’ve managed to tell the story that we wanted to tell with our version of She-Ra. But I do hope that we've helped at least open some doors for people who are passionate about showing complicated female heroes like She-Ra in the classic, epic, fantasy, sci-fi worlds we all love so much.”