Did SpongeBob SquarePants Comes out as LGBTQIA+? 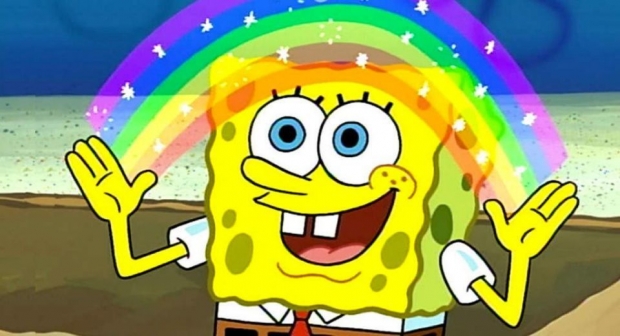 Just in time for Pride Month, Nickelodeon has revealed that everyone’s favorite yellow sea sponge, SpongeBob Squarepants, is part of the LGBTQIA+ family. So it would seem. The network recently tweeted a colorful collage featuring SpongeBob along with Korra from The Legend of Korra, and actor Michael D. Cohen of Henry Danger, who are both LGBTQIA+. The photos were followed by the words, “Celebrating #Pride with the LGBTQ+ community and their allies this month and every month.”

Many assume that this tweet confirms a long-held theory that SpongeBob is gay, but this may not necessarily be the case. The LGBTQIA+ umbrella encompasses a wide spectrum of queer identities, one of which is asexual. The show's creator, the late Stephen Hillenburg, spoke about the sponge’s sexuality in relation to his friend Patrick Star in a 2005 People Magazine article:

"We never intended them to be gay. I consider them to be almost asexual. We're just trying to be funny and this has got nothing to do with the show."

Either way, Nickelodeon is taking a fantastic step in the right direction, teaching young viewers it’s ok to be gay, asexual, or whatever label feels right. What do you think? Is SpongeBob gay? And should that matter?