The Clumsy Yet Charming Dragon of ‘Zog’

Directors Max Lang and Daniel Snaddon discuss the challenges of staying true in the 3D world to the popular rhyming picture book about a bumbling but enthusiastic young dragon. 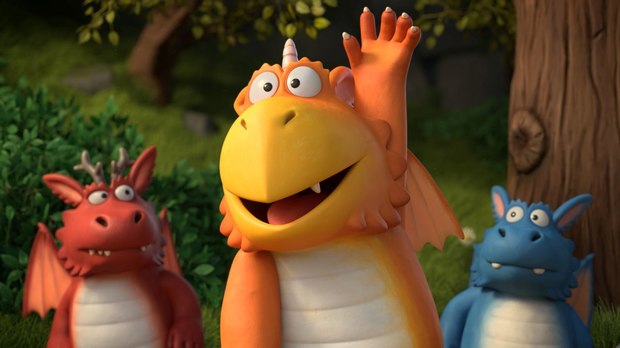 The animated short film Zog tells the story of a keen but accident-prone young dragon who yearns to earn a gold star at Dragon School. Produced by London-based Magic Light Pictures with animation services provided by Cape Town, South Africa-based Triggerfish Animation, the touching film follows Zog over the course of five years as he learns to fly, roar and breathe fire. Along the way, the clumsy dragon keeps meeting a kind young girl, who patches up his bumps and bruises. But, can she help him with his trickiest school assignment yet: capturing a princess?

Magic Light Pictures has built a cottage industry around this type of animated short film, working with distribution partners like the BBC in the U.K. and ZDF Television in Germany.

“For the last 10 years at Magic Light Pictures we've been making a series of high-end specials based on these types of books,” Magic Light Pictures producer Martin Pope explains. “We aim for something the whole family can watch together, high-end, dramatic storytelling for that audience. The books are fun, but they're short reads. So, the task has been to take [these stories] and find the drama between the lines in the illustrations, pull that out and try to create a coherent drama – taking it seriously as drama, with comedic touches.”

Directed by Max Lang and Daniel Snaddon, the 27-minute film is nominated for an Annie Award for storyboarding in an animated television/broadcast production and has completed a qualifying run for the 2020 Oscars. It will also be available on Amazon Prime as of this coming Monday, December 16.

Zog is based on the popular rhyming picture book by Julia Donaldson and illustrated by Axel Scheffler, who also wrote The Gruffalo and Room on the Broom, both of which were adapted by Lang and Magic Light Pictures to earn Oscar nominations for best animated short film in 2009 and 2012 respectively.

“We always want to stay true to the original texts and to the original poetry, and what comes from that is a very different, unique pace and tone in these films,” Lang shares. “Originally, I have to say, we were a little bit self-conscious about it when we did The Gruffalo, but I've come to realize that people really enjoy the different pace and tone of these films. I often talk to parents who just discovered The Gruffalo and what they really remark on is that it feels different and unique.”

“The other thing that came from that is that we had to tell a lot of our stories visually,” he continues. “Both Dan and I come from storyboarding, so that's something we really embrace. We love to tell as much of the stories visually as possible.”

The directors reported that the film took about 18 months from pre-production to completion with a team of about 60-70 artists at its peak at Triggerfish Animation. Snaddon describes that Zog gave them the chance to really lean into the comedic element a bit more, “by focusing on the inherent tension that comes from the main character being someone who's really enthusiastic, but has no talent.”

Of course, Scheffler’s original illustrations gave them the guiding principles for the animation, but they had to be adapted for the 3D world.

“We never want to contradict the illustrations or the story,” Lang says. “We want to add to it. We don't want to change it. We want to read between the pages, between the lines and fill it out more and bring the world and the characters to life. We really try to stay true to the core idea and just embellish on that.”

According to Snaddon, “A big focus for us has been on trying to make sure that even though we were working in CGI, that it still feels that everything was made by hand. And so, we tried to stay true to the feeling of the hand-drawn illustrations by creating a world that feels constructed by people. It doesn't just feel like something that's been sped up by a computer program.” Snaddon adds that the team at Triggerfish Animation worked hard to capture an authentic feeling in their digital models, giving it almost a stop-motion feel as though it were built by hand. To achieve that feeling, they looked at a lot of reference footage, researching how small models are built.

Maintaining that aesthetic requires discipline. “We set ourselves lots of limitations,” Snaddon says. “With the way we light things and the way we build the sets in CGI, we try to make sure that if you had to do it in stop motion, you would approach it a similar way, and you'd have similar limitations.”

“So, in lighting we had the challenge of trying to simulate what a realistic stop-motion lighting setup feels like, [while still] trying to interpret the illustrations,” he elaborates. “We wanted to create a romantic feel and something that felt like the characters really pop off the page. He's bright orange and he's flying and walking through this English-looking countryside.”

For Lang, these limitations included making the characters look like miniatures along with sets that feel like they could be on a small sound stage. “I think a lot of it really comes down to working with very similar tools that you would use in the physical space,” Lang states. “It's just that you have to sculpt everything digitally.” One of the big challenges the directors faced was the fact that the story is told over the course of five years as Zog and his classmates age, as well as the humans in the film. That required five different sets of models. Plus, the number of characters was much higher than Gruffalo or Room on the Broom.

“The team at Triggerfish had to come up with some very smart ways of being able to build a race of dragons that can grow and a character that can age from a little dragon to a full grown one,” Lang explains. “It's not as simple as just scaling it up. It doesn't look right. It doesn't feel like a kid dragon if you just take the big one and scale it down. And the same way it doesn't feel the same if you just take a little one and scale it up. The proportions are all off. So, we had to come up with a lot of smart ways of building these characters to make that possible.”

Another challenge was finding the right voice actor for Zog, who ages into adolescence through the film. “We found lots of really talented young kids, but when they start to get towards adolescence, they get very self-conscious,” Snaddon notes. “So something that sounds completely spontaneous and off-the-cuff for a young kid, as soon as adolescence has hit them, they feel awkward and embarrassed about everything they're saying. You can tell. They just become completely self-conscious. But luckily, we tried for a long time and after a lot of back and forth, right at the end we found Rocco Wright who played Zog and brought the character to life and we were really relieved.”

Lang stressed that even thought this was his third adaptation from a Donaldson and Scheffler book, it never becomes formulaic. “Even though there is a similarity in tone and pacing, they are also very different. And we treat everything as its own unique story and try to find the right balance and the right tone for that specific story.” For the directors, working with Magic Light Pictures is very rewarding because they can collaborate with a small creative team and can see their vision through to the end.

“In the beginning, it was really just Dan and me brainstorming, doing all the boards, cutting the animatic and we just wanted to make a film that we were happy with,” Lang concludes. “They have a very small overhead at Magic Light, so there's not a lot of meddling. So, we were able to make a film that we would want to see. It's really our vision that you see. It’s very personal and very true to our own sensibilities and that's always very rewarding on these Magic Light pictures.”

Note that the directors’ second collaboration via Magic Light, Snail and the Whale, also based a book by Donaldson and Scheffler, is slated for a Christmas day broadcast on BBC.