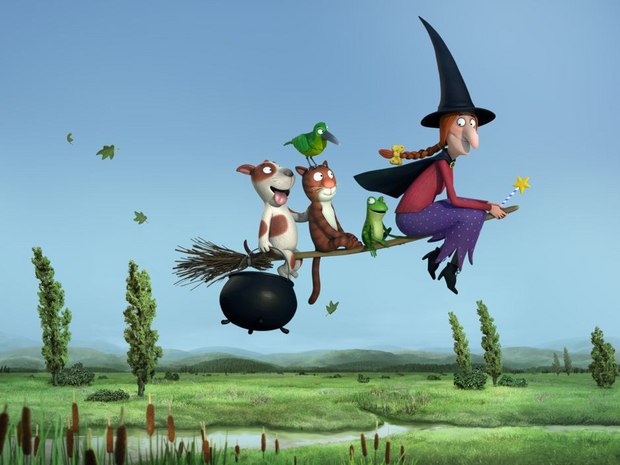 Michael Rose and Martin Pope, co-founders of Magic Light Pictures, produced the film, following their previous films The Gruffalo and The Gruffalo’s Child.

“We're very honored to have won an International Emmy Award,” says Rose. “It's fantastic recognition for the film, it's brilliant directors Max Lang and Jan Lachauer and everyone who worked so hard to make it.  Martin and I pick projects that have quality and integrity at their heart, and we're incredibly proud of creating a film that continues to enchant families globally.”

Room on the Broom has won over 14 awards including: Royal Television Society Awards – Best Children’s Program, Annecy Animation Festival – Cristal for Best Television Production, and TIFF Kids International Film Festival – Best Animated Short Film.  The film has had cinema runs in the UK and US and opened across France on November 27th, distributed by Les Films du Preau with over 150,000 admissions to date.

Room on the Broom is the film of the best-selling and much-loved picture book.  Written by Julia Donaldson and illustrated by Axel Scheffler, it tells the story of a kind witch (voiced by Gillian Anderson) who invites a number of animals to join her on her broom. The voice talent also includes Rob Brydon as the Cat, Martin Clunes as the Dog, Sally Hawkins as the Bird, Simon Pegg as the narrator , Timothy Spall as the Dragon and David Walliams as the Frog. The film was directed by Max Lang and Jan Lachauer.

Room on the Broom first premiered on BBC One to 7.6 million viewers as part of its Christmas programming in 2012, and also aired on Sprout in the US this October.  It has been sold to over 30 broadcasters airing across over 167 countries worldwide, and translated into 16 languages.

The DVD successfully launched in the UK in March 2013 with over 100,000 units sold to-date, and over 110,000 units shipped in the USA since release in August. Internationally, the Room on the Broom DVD is also being distributed in Australia, New Zealand, Canada, Germany, Israel, Netherlands, Singapore, Hong Kong and Scandinavia. Magic Light Pictures also recently launched an app of games called Room on the Broom Games which hit number one in the iTunes Kids chart, and which forms part of the work that Magic Light is doing to grow the brand.

The book, which was first published in 2001 by Macmillan, continues to be a huge success with over two million copies sold worldwide. In the US, it claimed the number one spot in the Children’s Picture Book Category this Halloween for the second year running.