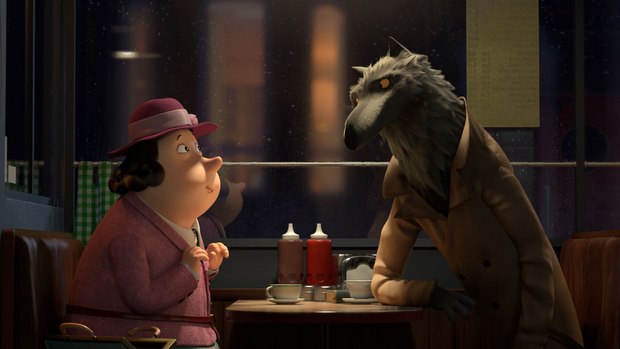 Based on the book written by Roald Dahl and illustrated by Quentin Blake, the multiple award-winning Revolting Rhymes was directed by Oscar nominees Jakob Schuh (The Gruffalo) and Jan Lachauer (Room on the Broom), co-directed by Bin Han To and produced by Magic Light Pictures’ Martin Pope and Michael Rose (The Gruffalo, Room on the Broom, Chico and Rita). AWN had a chance to ask the directors about the production of Revolting Rhymes -- part one of which has been qualified for an Oscar nomination in the short film category -- including development of the visual aesthetic and character design, and the challenges of adapting the iconic Roald Dahl. Read the full Q&A below:

The framing narrative for ‘Revolting Rhymes’ is brilliant -- what was the genesis of that?

Jakob Schuh: Dahl’s book obviously sports a very strong narrator’s voice, very quick and hilariously opinionated. Parents reading those rhymes to their kids are made to look good. Ultimately though, that narrator is Roald Dahl. So, we sort of had to find a stand-in for the man. Who is telling those stories in our film and, more importantly, why? (And also, why is he combining them all?) That was the question at the outset of that frame-story. Jan Lachauer: We took inspiration from Quentin Blake’s iconic cover-illustration which depicts a scene not mentioned in the book’s text, a big wolf reading stories to two little intimidated kids sitting on his lap. The idea to kind of “put Dahl in a wolf costume” as our narrator wasn’t far away. But it took us quite a while and many, many story iterations to come up with the right way to deal with that premise. How could we create a meaningful narrative around that character and what effect should him narrating have on the events within the fairy tales? Our ambition to create a frame-story that is linked to the main story in a surprising way became one of the biggest challenges in the writing process.

Magic Light has produced some of the most beloved Holiday specials of recent time. What was like to take on such an iconic property this time around?

JS: That’s true, as directors, I think it’s always exciting for us when Magic Light calls. These guys are so careful about which books they want to do. And they’re genuinely concerned about the way an adaptation is made to work. They give you the time to try and get it right. Even as was the case with Revolting Rhymes -- if the schedule is really tight from the get-go and they strictly speaking don’t have that time to give you.

JL: Being asked to work on Dahl was daunting, but such fun. Jakob and I both grew up with Dahl’s books, we’re huge fans, so it was incredibly exciting to be sent “Revolting Rhymes” back in 2013-2014. All the more as that’s a book of Dahl’s that hadn’t ever been translated into German, so it was also a chance for us to discover a brilliant new text of his. And then you sink your teeth into these gorgeous, effortless rhymes and it’s such fun to imagine them played out. There’s not a single line that you’re not positively excited to get recorded, staged, animated.

JS: The daunting bit was certainly that we knew we did want to intertwine the protagonists’ tales and fates. But we also knew we didn’t want to add any lines to Dahl’s actual rhymes and stay very close, tonally, to his narrative. That meant that our protagonists’ added connections, friendships, backstories had to play out without any actual dialogue simply because these things aren’t rhymed about in the book. But it also meant that we spent a lot of time discussing what kind of added narrative was really in tune, tonally, with the world Dahl gives us in his rhymes. How was the overall visual aesthetic developed? Did the illustrations created by Quentin Blake serve as reference or inspiration?

JL: For one of our first meetings about the project, Jakob and I found ourselves sitting in a café in Munich (where we’re both from originally); it’s a little place we’d always really liked, located just in front of an old puppet-theater museum. We were discussing the look of the film and how we wanted to go for something different, visually, than in our previous films for Magic Light. We discussed our mutual interest in theatre and stage design, and decided to use the opportunity to and visit said collection of puppets and marionette-stages which we both only remembered faintly from our childhood.

JS: The puppets with their carved surfaces and -- just as important -- the old marionette stages and their simple, flat, beautifully rendered layered stage props, there was just a ton of inspiration in that place. Those beautifully twisted old puppets seemed the perfect three-dimensional analogy to Blake’s twisted linework. The many, many photos we took on that day became and stayed one of our main guidelines for the modeling and texturing of both characters and sets. Please also discuss the development of the character designs -- for instance, were there any aspects that were particularly challenging?

JS: There were three main challenges regarding the character design: The first was to find a visual adaptation of Quentin Blake’s iconic artwork. To try and really copy Quentin’s actual style, his fantastic, loose, expressive linework, we never felt that would be a great idea. But we did want to stay true to his characters, their basic shapes. Here the solution was the aforementioned visit to the puppet museum.

The second challenge was the sheer number of very different characters in the book, most of which Quentin takes immense liberties with from page to page. They look quite different each time, each illustration lovelier than the one before. The character designer Uwe Heidschoetter, myself and a few other artists had to find a shape-language that allowed us to arrive a varied but coherent ensemble of designs, true in essence to Blake’s designs. Also they had to be modellable in a condensed timeframe. Really focusing on the boldness in some of Blake’s shapes was key here, not getting bogged down in details where none are needed.

The last challenge was that there’s three characters in our film that travel between the framing story and the fairytale world. These worlds have a very different set of rules, design-wise. But we didn’t have the time to build two different sets of models for each of these characters. So we had to find tricks in the design to make these three characters feel right in both worlds.

Briefly describe the production pipeline, including the software tools used for rigging and animation, compositing, and rendering.

JL: Revolting Rhymes was mainly produced on a Maya pipeline. Rigging and animation were achieved using custom Maya toolsets from previous Magic Light productions. Blender was used for modelling along with zBrush and Mudbox for the sculpting and texturing. Compositing was done in Nuke and Shading/Rendering in Arnold. Editing started in Premiere and was shifted to Avid for the final cut.