‘Mind My Mind’: Exploring the Complex Inner World of Autism Through Animation

Dutch filmmaker Floor Adams talks about her award-winning short film filled with the heartbreak and humor of living with Asperger’s syndrome. 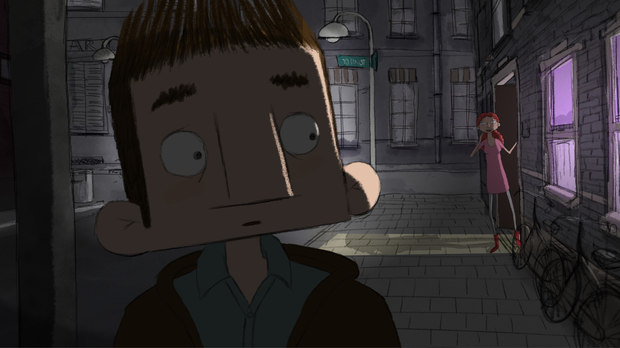 Acclaimed by the international animation community (and lauded by mental health professionals), Floor Adams’s multi-award-winning 2D animation Mind My Mind is a powerful, sensitive, and often very funny chronicle of the challenges faced by a man with Asperger’s syndrome. Like all of us, Chris depends on social scripts to get him through the day. However, especially when it comes to perilous undertakings like dating and sex, his condition makes it a lot harder for him (and his dedicated neural assistant, Hans) to find the right script for these more open-ended situations.

As is often the case with personal projects, Mind My Mind had a long gestation period. Adams first started thinking about the idea in 2009, or as she recalls it, “I thought about it, got pregnant, and thought about it again.” She first applied for funding in 2012 and began animating in 2014, first with one animator, then two, then three. William Thijssen of CinéTé Filmproduktie, who produced Michaël Dudok de Wit’s Oscar-winning short Father and Daughter, came on board as a producer, followed by Tom Van Gestel of Fabrique Fantastique. Meanwhile, the film grew from 11 to 15 to 30 minutes. In the end, some 59 people – including six animators, three composers, and several former students of Adams – contributed to the film, which went on to win awards at Anima, Stuttgart, CINANIMA, and numerous other festivals.

Mind My Mind - Official Trailer from CinéTé Filmproduktie on Vimeo.

We recently had the opportunity to speak with Adams about Mind My Mind, not only the production process and the many challenges and triumphs along the way, but also the nature of autism and the seminal experiences that led her to make the film.

AWN: The style of your storytelling in this film, the way you depicted the tortuous process behind this young man’s efforts to perform simple tasks and deal with the world, was extremely powerful and illuminating. Autism is so foreign to some people that they really don't even know how to think about it. How did the project come about and what made you want to tell this story?

Floor Adams: I used to teach animation in art school to students with autism. And one day during break time, one of them told me about his special interest, which at the time was the Tokyo subway system. He knew everything about it – the names of the stations (in Japanese!), how many suicide attempts there were on average, how many people traveled by train every day. And it really fascinated me. And I said, "You know all these details. How do you remember it?" And he said, "I read it, and I remember it because I like it and it interests me. But if you ask me to go get groceries, or go to a party and interact socially, that's very difficult for me."

So that got me thinking, "How is it even possible that you'd know all these things and can't remember the other things? What does it look like in your brain?" I'm a visual thinker, of course, so I was wondering, "Are there rooms in your head? Or do you have a cupboard, or a file cabinet – how does it work?"

And, during the same period, I fell in love with someone who turned out to be autistic himself. At first I didn’t believe it. He was a bass player, an archeologist, a very clever guy. And I told him, "There's nothing wrong with you. I know my students are autistic because they're in the special school, they're labeled, they're diagnosed. But you – that's not possible." And it turned out to be possible.

And that was such an eye-opener for me, you know? You don't see it from the outside. Especially, when people are very clever, very smart, they can blend into the surroundings and copy other people's behavior. We could be at the same party, or meeting the same people, and he was busy doing other things in his head, and I wasn't aware. And I thought, I need to make a film about this. But one that’s also about love. Because there are films about autism, but not really also about love, not from an inside perspective. So I thought, I must be the person who does this story.

AWN: Clearly, you had a lot invested in this. So once you made the decision to tell this story, what were your next steps? Did you first write the script?

FA: Yes. But before this, I interviewed many people with autism, like old students of mine and my ex-lover. And also autism experts and professors. I wanted to know the best image to describe, or to show, autism, something that would not be stereotypical. Many people think Rain Man, Dustin Hoffman, is the typical autistic guy, which he's not, because there is no typical autistic guy. I spent many, many hours researching so as not to exaggerate and not make it look stupid.

I knew it had to be some sort of love story, the flirting process, the sexual process. I had a table full of notes, and I puzzled and I wrote... I didn't want to go into production until it was perfect because it was my first film. So I took all the time I thought was necessary, within reason, of course, because you can’t go on and on until you're 80.

AWN: How did you go about designing the look? What were your considerations regarding the animation style and techniques you would use?

FA: Well, I wanted Chris to be some sort of a square. His face is kind of "square-y." And I wanted her to be more round. And Hans, the character inside his head – we called him “Hans,” after Hans Asperger [for whom the syndrome is named] – I know it looks a bit like a penis, but it's not on purpose. Many people say, "Why does he look like a penis?"

AWN: Yeah, that's the first thing we thought, but that's just us.

FA: This may sound stupid, but I used to draw a lot of teachers like this when I was doodling. It was the first figure that came to mind and I thought, well, he doesn't need anything else. He needs to see, but he doesn't need ears. He only needs the essential parts. So this is it.

I wanted the look to be just like it was in my sketchbook. So we worked in PC Paint and one of the animators created a brush that was quite similar to my brush strokes on paper. It was a big process because you can't use the paint buckets. And because there were a lot of open lines, the people who were coloring the animation needed a lot of time, as well. But I think it was good in the end, because we succeeded in capturing this very specific look.

AWN:  You spent about 10 years on this project as a fundraiser, designer, producer, director, businessperson… basically, living the life of an independent filmmaker. Looking back, what would you say was the biggest challenge?

FA: It's really a big challenge to have to take care of everything. Normally, you're not a producer and a director at the same time, at least not in The Netherlands. But because I started this production, I was a producer, so I was also responsible for the whole budget, which made it quite hard. Also, I was working with so many people with different schedules, which meant I would have to work during the weekends, and my private life and my work life became intertwined, which was a burden. But it was also beautiful to work with so many people with so many talents, who could do things that I wasn't capable of, and made the film much better. So overall, I would much rather work collaboratively than work on my own again.

Also, we had test screenings with lots of different people, including people with autism. And we would ask, "Can you follow the story?," "Is it clear to you?," and so on. It helped so much during the whole process. I would advise everyone to do this, to collaborate and to let people watch your film at an early stage, before everything costs so much money.

AWN: What do you hope audiences will come away with after watching your film? What’s the most important thing you want to convey to them?

FA: I hope people will be more patient with each other, more tolerant, more accepting of each other's behavior. Many people with autism get bullied, and so they try to blend in as much as possible. Which is so sad because they're beautiful the way they are. When they walk out of the cinema, I want these people to be able to say, "Wow, that looks like me. I can relate to this film. I feel represented." That's the best thing I can achieve, I think.