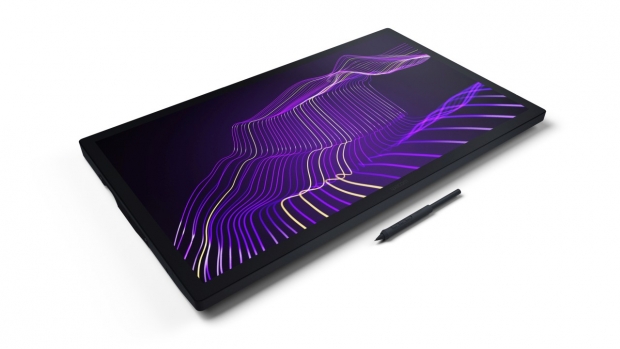 Wacom notes the new Wacom Cintiq Pro 27 features improved pen performance, standard multi-touch, improved ergonomics, faster refresh rates, vivid and accurate color, and a focus on comfort and custom options. Additionally, it has a modern look, is lightweight, and has a thin 27” screen with a smaller footprint than its Cintiq Pro 24 sibling. Wacom’s latest pen display joins the company’s Cintiq Pro 16 and Cintiq Pro 24 models, which are available in various sizes suitable for different workspaces and demands.

“The emphasis on cloud computing and the dependencies placed on professional freelance and studio artists to collaborate freely, quickly, and efficiently on a global scale requires a multi-tasking, do-it-all creative tool,” said Faik Karaoglu, Executive Vice President of Wacom’s Creative Business Unit. “Enter the Cintiq Pro 27, where creative professionals can count on intuitive and natural-feeling pen and touch input, extremely accurate, factory-calibrated color, faster refresh, and other design features that allow users to comfortably and confidently produce and share work across the creative pipeline.”

The improved pen-on-screen experience on the Cintiq Pro 27 introduces the Pro Pen 3, allowing users to change the pen's weight, barrel size, and center of gravity with its interchangeable components. As a result, artists and designers can adjust the pen to suit their working preferences. In addition, the Pro Pen 3 has enhanced tilt recognition and features Wacom’s EMR (Electro-Magnetic Resonance) technology with 8,192 levels of pressure and battery-free operation. It never needs charging, and the three programmable side-switches on the pen allow users to create software shortcuts and modifiers for most pressure-sensitive applications. Multi-touch comes standard and is especially useful for an artist’s non-dominant hand when working in programs, especially 3D applications, requiring one to pinch, zoom and rotate a model or sculpture. In addition, the ten-point selective touch allows users to manipulate on-screen sliders and other navigable features when working in a virtual production environment.

Because the pen display can work with Mac and PC operating systems, gestures are always available to users. However, multi-touch with Linux is dependent on application support. For users working in applications without multi-touch, there is an on/off button..

The Cintiq Pro 27’s new display has almost no parallax and latency with an improved refresh rate of 120Hz, which allows the cursor to track twice as fast as previous models. With 4k resolution in 10-bit color, 98% DCI-P3 (Digital Cinema Initiatives – Protocol 3), the film industry’s color standard, and 99% Adobe RGB color accuracy, the display provides a true-to-life visual experience. In addition, the display is Pantone validated and Pantone SkinTone validated, meeting the Pantone standard for accurately displaying the entire range of human skin tones.

Eight grip-style ExpressKeys have been added to the back of the display, with four on each side, allowing users to move their most used keyboard shortcuts closer to their actual workspace. Wacom also included an expandable bezel to the Cintiq Pro 27, which can accommodate a small extension table to rest items such as a keyboard or smartphone.

The Cintiq’s new stand (sold separately) matches the design of the new pen display. It’s fully adjustable for almost any working position and supports +/- 20 degrees of screen rotation. The display also has Vesa mounts for other OEM stands.

“Professional content creators in media and entertainment, industrial design, and education can all benefit from a tool that’s fit to work the way they want to work,” continues Karaoglu. “Whether illustrating in 2D, sculpting in 3D, or building a virtual production solution, everyone has their own way of working, and we are excited to be introducing the Cintiq Pro 27 to the creative community.” Wacom is offering new Cintiq Pro 27 customers access to Celsys’ Clip Studio Paint EX and MASV three-month software trials. Also available later in October, three-month trials will be available for Shapr3D and Bluescape. In addition, 90-day trials of Toon Boom’s Harmony will also be available for download in the second half of October.

The Cintiq Pro 27 pen display is available at the Wacom eStore, Canada eStore, and select retailers.