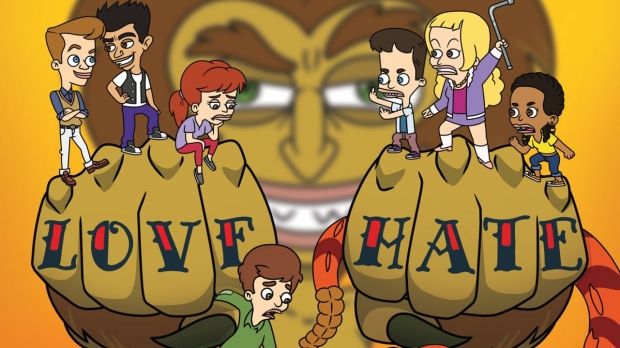 Oy! Season 5 of Big Mouth is coming soon, as if we need a reminder why Junior High sucked! All our favorite (?) characters return just a little bit older, wiser, and hornier - jumping feet first into whatever existential angst awaits them in the 8th grade. It’s all funnier when it’s happening to someone else! So don’t miss the fun when a new season of Netflix’s hit animated comedy drops December 5… you’ll feel better about yourself and your misspent youth.

Starting with “No Nut November” and continuing through New Year’s Eve, Big Mouth Season 5 takes on the theme of LOVE & HATE with the introduction of lovebugs and hate worms, amorphous creatures that can shift between the two forms (like caterpillars and butterflies). Nick’s lovebug, Walter (Brandon Kyle Goodman), pushes Nick to pursue his feelings for Jessi until she publicly rejects him, turning Walter into a hate worm who leads Nick down a dark, rancorous path. Meanwhile, Jessi’s lovebug, Sonya (Pamela Adlon), appears as Jessi gets closer with Ali and eventually wonders if she loves her as more than a friend. Jessi and Ali’s new close bond, and joint co-opting of Missy’s affinity group, sends Missy into her own hate spiral, fueled by hate worm Rochelle (Keke Palmer). Jealousy, unrequited love, and newfound crushes abound in this new form-breaking season as the Big Mouth teens navigate 8th grade.

New guest stars include Adam Scott as "Mr. Keating;" Jemaine Clement as "Simon Sex;" Kristen Schaal as "Bernie;" Kumail Nanjiani as "Kumail Nanjiani;" and Chloe Fineman as "Leah." As previously announced, Goodman ("Walter"), Palmer ("Rochelle"), and Adlon ("Sonya") will be guest-starring this season. The three will also appear in the Big Mouth spin-off, Human Resources, and their characters will be introduced in this new season.