Pictures from the Brainbox: A Weekly Dose of Indie Animation - 'Plug & Play'

Every Monday or so, Chris Robinson asks an animator how they made a particular film. This week: Michael Frei offers up a riveting and impassioned commentary on the creation of his award-winning film/game, 'Plug & Play' (2013) 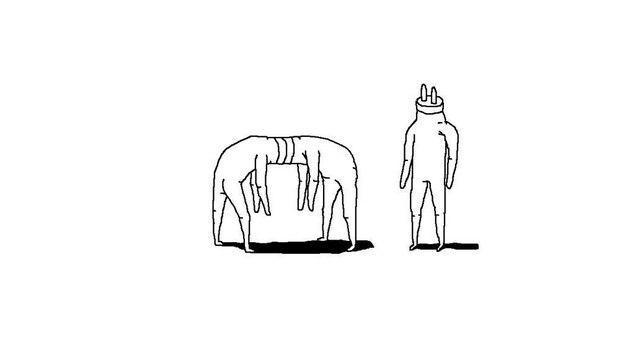 Michael Frei is a youngish animator/artist/human from Switzerland. He’s best known for his award winning 2013 film, Plug & Play, which was later turned into a video game for the kids and their friends from Estonia.

The film features lots of humanesque plugs and sockets entering and exiting. It’s about love, it’s about technology, it’s about coming and going... about community,  sheep, revolution, compassion, pulling out, separating... maybe it’s about holes... or wholes... or ...i dunno... you figure it out.

Meanwhile, let’s get on with the absolutely riveting and insightful interview.

I used one computer and my body. My eyes looked onto a laptops screen while my brain guided my right index-finger to steer a 3px black pencil on a white canvas of 1920x1080px via my computers trackpad.

To draw binary images for digital film about binary relationships with my digit made perfectly sence. Doesn’t it?

To not get tendonitis.

Choc Chip Animation Riffs on Pop Culture in ‘The Art of Murder’
F is for Flake: The (Not So) Great Animation Robbery?
Re-VIEW: ‘Avatar: The Way of Water’ – A Miraculous Vision
‘Kung Fu Panda: The Dragon Knight’ Celebrates a Special Lunar New Year
END_OF_DOCUMENT_TOKEN_TO_BE_REPLACED