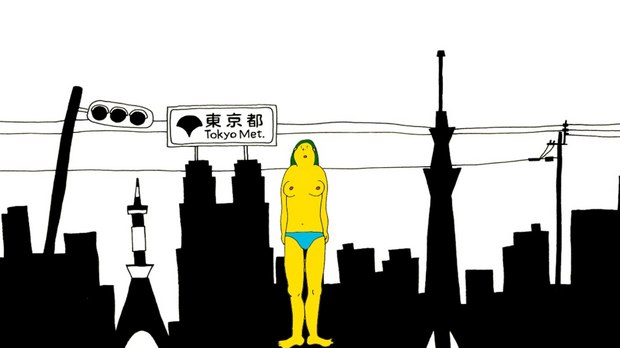 Sawoko Kabuki is a graduate of Japan’s Tama Art University. Her brightly coloured, in your face films are often unharnessed expressions of sexuality, heartbreak, identity, despair, bulimia and enemas. You get the picture.

After breaking up with my ex-boyfriend, I was heartbroken but I had to think about the theme for my next animation film. Just then I had a dream of this ex-boyfriend. This animation film is based on that dream.

It was drawn by paper with hand, edited with Photoshop and After Effects. This is a graduation work of the university.

There is no reason. I knew only this technique. (2D animation)

By the way, my ex-boyfriend used to like enemas. So in this song, the word of "ass" and its related words are fluttering. All of these are linked to the memories of him so I decided to use this song. In that dream the face of my ex-boyfriend was not clear, so in this animation, his face is drawn just like "ass”. 。

As I said before, this was a story based on the dream I saw when I was dumped by my ex-boyfriend, so I had a hard time to face it.

Everything is so. But there is also a sense of accomplishment.

Yes. It was so-called detox for me.

However, even if I see this animation now I feel like crying.