Every Monday or so, Chris Robinson asks an animator how they made a particular film. Today, Peter Millard answers some brand new Brainbox questions whilst sharing intimate words, thoughts and feelings about his film, 'Six God Alphabet' (2017). 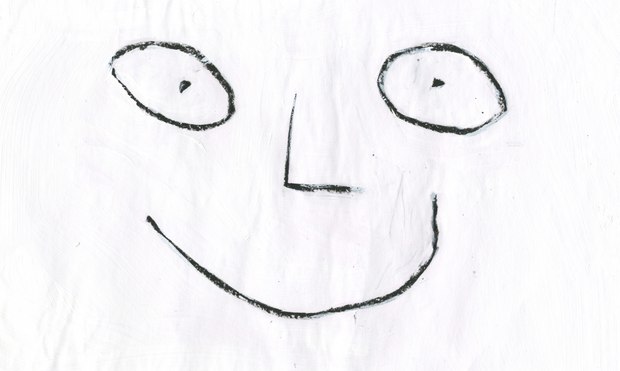 Peter “Giggles” Millard is a British person who draws and paints animated short films self-funded by himself via his job at the Natural History Museum in London, England. His films are chain reactions, with all the everyday stuff of life transformed into a living child’s drawing – joyful, unnerving, funny, loose and daft, yet composed and crafted in such a way that they are anything but throwaway. He's also ventured into the world of clay and sound.

Millard’s most recent film, Six God Alphabet Peter (2017) - about a sextet of aggressive Gods who disturb poor atheist Peter’s sleep one fine morning and force him to learn his ABC’ - is also is first to use dialogue and the alphabet.

On another early morning, he groggily agreed to answer some penetrating questions about his experience making the film.

I started making paintings of the letters because I knew I wanted to make something with the alphabet but I didn’t know what yet.  For each letter I did 75 paintings.  I had also just moved studio because i was in a very noisy place and wanted something a lot more quiet which i didn’t think about at the time meant a lot of the time I’d be on my own with only my thoughts to keep me company.  This combined with the fact I was going out a lot on the weekends pushing my mind quite a lot and then coming to the studio, so between Monday and Wednesday most times my head was very fragile with only my own thoughts.  I then found myself writing a lot to try and make myself feel better which turned more into conversations to myself about insecurities of life.   I then simply filtered them into my alphabet idea and that’s how the film became what it was.

As i said before my mind was very fragile and didn’t want to be anywhere near a computer where I felt I could get distracted easily and just wanted to be painting in my own world.  Also the internet was really bad where I was which was a blessing in disguise.  I listened to a lot of questionable radio in this period. G comes after F but before H.

As the studio cost more than my previous place I had to work more in my part time job more which was fine as I like that job but did mean the film took longer than I wanted.  I was also travelling a lot for talks and festivals and doing little idents for people etc.  I’d say roughly 5 months or something.

The editing.  I love the short film Sunny Afternoon by Thomas Renolder and how he made a lot of it with very limited frames.  This is what I had in mind with the letters in that its very rigid what I had to work with but trying to come up with something substantial with it was fun.  In the end it came quite naturally. Every screening is different.  Sometimes it goes great but also I have enjoyed the screenings where it’s completely bombed and can get very cringey.  You can really feel the tension in the audience especially with the last scene.  I didn't go out to make a film like this so yes an interesting development.

It was the first time I’d used any real dialogue in a film and gave myself some strict guidelines with images I had to use so was fun trying to make something out of the limited images.  Do I feel better?  I’m not sure.