Pictures from the Brainbox: A Weekly Dose of Indie Animation - 'Doxology'

Every Monday or so, Chris Robinson asks an animator how they made a particular film. This week: Michael Langan discusses the making of his now classic student film, 'Doxology' (2007) 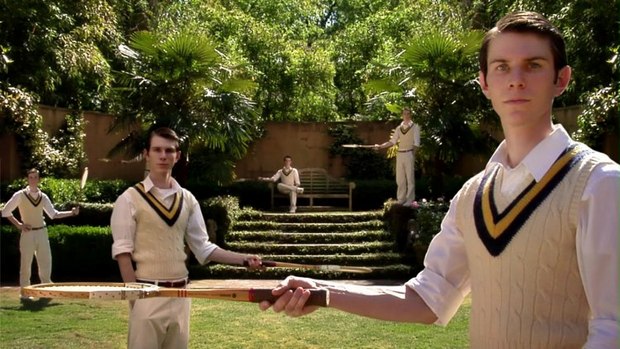 Michael Langan's films and music videos (e.g. Choros, Another Love, Butler, Woman, Man) have been called "confounding and fascinating" by The New York Times, "inventive" by The Atlantic, and "eerily beautiful" by NPR, and have played at over a hundred film festivals worldwide.

Long before the acclaim, Langan arrived on the animation scene with Doxology, an ingenious, innovative and playful short that he made back in his student days at the Rhode Island School of Design.

It’s got a little bit of everything, so I’ll just unload per scene:

0:00 - Earth from Space: Time-lapse footage of the sky, flipped upside-down and distorted in After Effects.

0:25 - Title: Wooden letters purchased from Michael's, shot in two passes on a stop motion dolly with two different lighting schemes, then comped together.

0:37 - Tennis Players: Six live action plates shot on location with a rented Panasonic HVX200, plus a background plate which is mostly flipped in post for symmetry. No greenscreens, just two long weeks rotoscoping masks for each player's looping action (the color keying artifacts at that resolution would have been gnarly).

1:18 - Spinning Carrots: Each carrot is rigged to a lazy susan with increments marked on the side, shot in stop motion, then rigs are painted out. Took a bite out of one of them mid-take and rigged it separately, then shot that on a homemade greenscreen. The background is my bedsheets and apartment wall.

1:35 - Bald Guy: This is my step-brother, Josh, in the gorgeous Marin Headlands. I brought a bunch of stuff to artificially inflate his belly, but he could just puff himself up like that on his own.

1:58 - Fogged Mirror: Preview of the upcoming "Ablutions" shot, with a live action black ink element I shot to use as an alpha mask, cutting through the blurs and textures which form the fog.

2:07 - Meeting God in the Snow: The people and some of the stuff on the ground are shot frame by frame on RISD's greenscreen cyc stage. (I shot this in pixilation for want of a high res live action camera, plus it places it in a nicely altered reality.) The falling snow was the one thing I ever made in Maya (never again).

3:19 - Celestial Toothbrush: Shot in stop motion on a lazy susan and homemade greenscreen, with added brushy motion in post.

3:24 - Ablutions: I stuck my head on a little cradle to keep it as stable as possible, then shot loops of each action in stop motion on my janky greenscreen. Then I carved up all these elements and reassembled my face in post (there's something like 50 layers), and added a little motion to the whole thing to sell it.

3:37 - Car Tango: My friend Peter loaned me his Oldsmobile, and we marked out all the positions in masking tape (you can still see the tape on the ground). This scene got me my first real commercial gig (for which we used lasers instead of tape... which were cooler but less effective):

4:10 - The Moon: Foam and paint prop on a lazy susan with a mini tennis ball, plus some fuller's earth shot as a live action element for the impact.

4:19 - Aerial Shots: I brought my Nikon D70s with me whenever I traveled that year, and shot like mad out the plane window during every takeoff and landing. I was also into the idea of making a visual equivalent to the musical Shepard Scale, which appears to rise endlessly, so I stabilized each shot on a single point and wove the opacity of the footage back into itself over and over as we pass by. The music is a small choir from Brown, recorded several times with different affectations to their voices to simulate a church congregation.

5:32 - End Credits: The music is a nod to Jan Svankmajer. It's a mariachi arrangement of "My Hat, It Has Three Corners" from his film, "Etcetera," recorded with Mariachi de Brown.

The short answer is: because it was the only way I knew how to convey these ideas with the resources I had at the time.

This was my thesis, or "degree project" at Rhode Island School of Design, so roughly two semesters from start to finish.

Doxology was made the way many experimental animations at RISD and CalArts are made: you fish around in your head, fish around in the world, catch some stuff and throw it up on the wall before you have a chance to judge it. Then you rearrange it a bit, fish some more, and create some connective tissue... break it completely and then realize it's much stronger without 50% of your fish, plus one fish you had to re-shoot. Taking all this stuff and assembling it in a cohesive way that feels "right" can be crazy-making, but incredibly refreshing when it starts to make sense.

There are some aspects of roughness that I dig, or at least appreciate as artifacts of 2007: the low res HD video in the tennis players' courtyard, the sketchy pixilation with my friend Peter's car on a Brown University parking garage. But the crappy lighting in the snowy desert where our hero encounters God is my biggest cringeworthy moment, from a technical perspective.

Sometimes I'll recall with a twinge how absurdly justified I felt about the structure and logic of the film shortly after completing it. I'd get weirdly defensive whenever someone dismissed it as a random assembly of vignettes. A lot of work went into those random vignettes! But for a minute I drank my own Kool-Aid a little intensely. The truth is somewhere in the middle: Dox is a bunch of weird stuff culled from my subconscious and my fascination with formal experimentation. But it's also an attempt to make order from some very disparate elements, and place them together into a spiritual journey that hopefully rings true in moments.

Yes! College was a hyper-inspiring experience for me, with faculty like Amy Kravitz, Steve Subotnick, Bryan Papciak, etc., plus mind-expanding trips to my first festivals, Ottawa and Ann Arbor. I felt super-charged by that stuff, and Doxology was the product of all those ingredients mixing in the safe vacuum of school. It's a testament to the creative freedom I felt at that time, and a reminder to me today that a film can be just about anything.