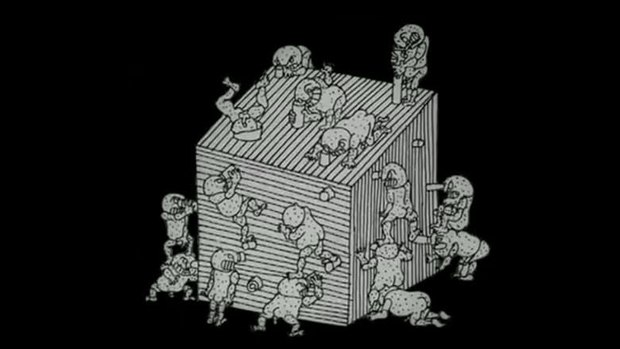 This past week, Japanese animator Yoji Kuri celebrated his 90th birthday, so seems like a good excuse to revisit one of his films.

Kuri’s films have bite and he helped lift Japanese animation out of decades of cozy narrative cartoons into a new era of graphic and conceptual experimentation. His films mock and shock, attacking technology, population expansion, monotony of modern society while playfully toiling with the tricky goings-on between guys and gals.

Witnessing the surrender of Japan during WW2, the devastation of his country followed by the quick rise of Western inspired materialist culture and rampant consumption, Kuri, like many of his colleagues of the time, questioned the state and direction of his society and world.

One of his more experimental, stream of consciousness works is AOS (1964). Working with a vocal composition by Yoko Ono, Kuri takes the avant-garde artist’s assorted screams, moans, licks, and grunts and twisted them into a haunting and surreal series of black and white scenarios often involving discombobulated body parts of frustrated and repressed men and women who exist in cramped, isolated trappings – desperate but unable to connect or touch the other.

Kuri likely made the film as an angry critique of a Japanese society that he deemed severely repressed, but in some ways, AOS takes on a whole need feeling of relevance in this increasingly virtual world we find ourselves frequently, frustratingly, willingly occupying... alone.