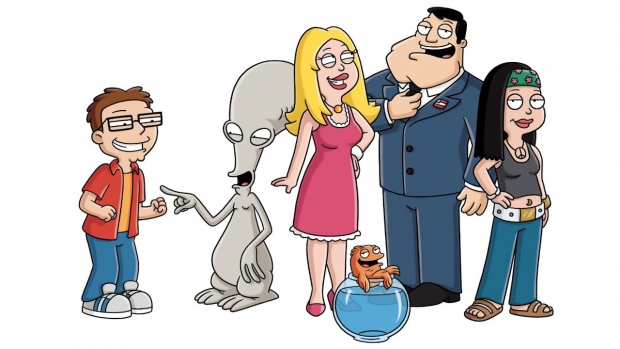 American Dad!’s milestone 300th episodes is set to air September 14; since moving to TBS in 2014, the show has aired 101 original episodes. Its most recent season drew nearly 18M total viewers and ranks as a top-five cable comedy.

Produced by 20th Century Fox Television, the show is created by MacFarlane, Weitzman and Mike Barker, and executive-produced by co-showrunner Brian Boyle along with MacFarlane and Weitzman. This past January, TBS renewed the series for two more seasons. At the time of the renewal, Weitzman noted, “After these next two seasons, we will have over 300 episodes. Thus proving that whatever American Dad! lacks in quality, we make up for in quantity.”

The schedule of curated episodes is as follows:

4:00 PM ET/PT - "Vacation Goo"
The Smiths find out that their outstanding family vacations have only been experiences in virtual reality. Stan vows to redeem himself by taking the family on a cruise, but when they are stranded on a remote island, things get out of hand.

4:30 PM ET/PT - "May The Best Stan Win"
As Valentine's Day approaches, a cyborg version of Stan attempts to steal Francine away from Stan; Roger directs a shot-for-shot remake of the movie "The Goonies."

4:00 PM ET/PT - "Tears of a Clooney"
Francine is feeling depressed as another birthday comes around. In an effort to cheer her up, Stan helps Francine hatch a plan to break George Clooney's heart. Meanwhile, Roger adopts a bunch of orphans to help work his vineyard.

4:30 PM ET/PT - "Fartbreak Hotel"
When Roger releases lethal gas into the Smith residence, the family moves into a hotel while the fumes clear.

5:00 PM ET/PT - "Widow's Pique"
When Stan is on a mission, Francine pretends she's a widow. Steve and his friends play wrestling and get beat up by Principal Lewis.

5:30 PM ET/PT - "Family Plan"
Francine reconnects with her birth family when she starts craving the experience of having a big family. Stan becomes a Picker based on his obsession with American Pickers.

4:00 PM ET/PT - "Haylias"
Stan, unhappy with the decisions Hayley is making for herself, decides to set her up with a proper husband. He gets her to go along by using her "activation word" which was ingrained in her.

4:30 PM ET/PT - "100 A.D."
When Hayley and her old boyfriend, Jeff, elope, Stan freaks out and offers a reward to anyone who can stop them, sparking a wild goose chase throughout town.

5:00 PM ET/PT - "Love, American Dad Style"
Roger opens a crooner's bar in the Smith family's attic and recruits Hayley as his main entertainer. Soon all of Langley Falls becomes enthralled by her singing voice. Stan tries to prove his manhood by negotiating a deal on a car.

5:30 PM ET/PT - "Faking Bad"
When Hayley tries to go clubbing with her friends she is turned away because she doesn’t have proper ID. Hayley convinces Steve to make a fake ID for her. The fake ID is so good Hayley and Steve go into business as counterfeiters.

4:00 PM ET/PT - "Bully for Steve"
Stan becomes tired of Steve never standing up for himself. To help, he becomes a bully and picks on Steve. Meanwhile, Reginald finally asks Hayley out on a date.

4:30 PM ET/PT - "I am the Walrus"
Stan resorts to extreme and cruel measures to humiliate Steve and maintain his alpha-male status in the house, and Hayley and Jeff turn to Principal Lewis for marriage counseling.

5:00 PM ET/PT - "My Purity Ball and Chain"
Stan avoids giving Steve “the talk” by joining a chastity group. The Smiths build a waterslide in the backyard.

5:30 PM ET/PT - "Top of the Steve"
Steve goes to boarding school, only to discover it’s an all-girls school. Stan is annoyed by a parade of characters that come to take Steve’s place at home.

4:00 PM ET/PT - "Da Flippity Flop"
Klaus swaps bodies with Stan after discovering that his original human body is on ice at the CIA; after converting the attic into a gym, Roger attempts to convince Stan to sign up for a lifetime membership.

4:30 PM ET/PT - "The Life Aquatic of Steve Smith"
Steve joins the high school water polo team in order to get girls. Meanwhile, Roger and Stan get a boat.

5:00 PM ET/PT - "Fight and Flight"
Stan goes over-the-top to produce a reenactment of Charles Lindbergh’s solo flight for Steve’s school project after he gets an F. Klaus buys a pair of shoes online and Hayley helps him harass the neighbor they believe has stolen them.

5:30 PM ET/PT - "No Weddings and a Funeral"
Klaus leaves the family after one too many harassments. 15 years later, they reconnect for his funeral.

4:00 PM ET/PT - "Why Can't We Be Friends"
After concluding that Snot isn't cool enough to hang out with Steve, Stan concocts a scheme to separate the pair by sticking Snot in the Witness Protection Program; Roger gives Steve money to clean out his attic.

4:30 PM ET/PT - "Lost in Space"
In order to return to Earth, the space-bound Jeff must convince an emperor that he is in love with Hayley.

5:00 PM ET/PT - "The Longest Distance Relationship"
Hayley is injured in a fire and while she is in the hospital she meets Millionaire Matt Davis. As Hayley and Matt fall in love, Steve discovers Jeff Fischer is still alive in outer space.

4:00 PM ET/PT - "With Friends Like Steve's"
After Steve shows a lack of interest in Stan's job, Stan replaces him with Barry, Steve's obese friend, who is in fact malicious (without his medication) and plots to replace Steve completely.

4:30 PM ET/PT - "Escape from Pearl Bailey"
Steve plots revenge against Lisa Silver and the cool kids after Debbie loses her bid to become student council president. But when the cool kids stage a counterattack, will Steve and his friends survive?

5:00 PM ET/PT - "Bar Mitzvah Hustle"
When Etan steals Steve's girlfriend, Steve concocts a scheme to get revenge. Aided by Roger, Toshi, and Barry, Steve plots to rob Etan's Bar Mitzvah and get back his girlfriend.

5:30 PM ET/PT - "Independent Movie"
Snot's father dies but Snot refuses to go to the funeral. Steve convinces Snot to take a road trip across the country to attend.

4:00 PM ET/PT - "The One that Got Away"
Roger discovers one of his personas has taken on a life of his own. Back at home, the Smith family becomes addicted to the 1970s electronic game Simon.

4:30 PM ET/PT - "Great Space Roaster"
It is Roger's birthday, and he begs to be roasted, but Roger takes the cruel jokes to heart and goes on a rampage against the Smith family.

5:00 PM ET/PT - "Ricky Spanish"
Steve convinces Roger to redeem his most hated and disgusting persona, Ricky Spanish, while Stan and Francine get a visit from the Nigerian boy they once sponsored.

2:30PM ET/PT - "Lincoln Lover"
Greg introduces Stan to the Langley Falls Log Cabin Republicans. Only after Stan is taken with their fabulous ways does he realize that it's a gay group. To gain further acceptance into this wonderful group, Stan decides to become gay.

"This is probably the best “political” episode we did.  Conservative Stan also evolves as a character here, taking a big step toward accepting gays.  But only the hot ones."

3:00PM ET/PT - "Best Christmas Story Never Told"
Stan goes to the past to keep Jane Fonda from ruining Christmas, but he winds up creating an alternate future where the United States has been taken over by the Soviet Union.

"The first Christmas show we did set the irreverent tone for how we’d handle the holiday in the future.  Our Christmas episodes rank as the 153rd reason why people decide not to kill themselves during this diﬃcult holiday."

3:30PM ET/PT - "Joint Custody"
Stan tries to get an unsuspecting Jeff Fischer out of his life for good by taking him on a road trip to Florida, where there is a warrant out for Jeff's arrest.

4:00PM ET/PT - "Tearjerker"
Stan and the family are characters in a James Bond-style spoof. Stan must stop Tearjerker, played by Roger, a diabolical film producer who makes movies that can kill.

"With Family Guy already doing their take on Star Wars, it took the American Dad! writers over 10 minutes to decide on a James Bond spoof. The actual story took even more time!  Plus, all the animation…"

4:30PM ET/PT - "1600 Candles"
The Smiths' plans to celebrate Roger's 1,600th birthday are sidetracked when Steve announces he's going through puberty. Ever fearful of the thought, Stan and Francine try to bypass the pains by having medicine injected into Steve's head.

"We received our ﬁrst Emmy nomination with this episode.  We didn’t win.  But the next time we were nominated, we didn’t win either."

5:00PM ET/PT - "Rapture's Delight"
The Rapture happens on Christmas Eve, and Stan is left behind.

"Our third Christmas show is often considered to be one of our best.  The popular episode is widely credited in bringing the troubled holiday back into fashion."

5:30PM ET/PT - "In Country...Club"
When Steve is selected to sing the national anthem at the Langley Falls Veterans' Day celebration, he gets some heat from Stan who doesn't think he's ready for such an undertaking.

6:00PM ET/PT - "Cops and Roger"
In an attempt to prove his manhood to Stan, Roger joins the Police Academy. But it's not very long until he becomes a corrupt cop.

6:30PM ET/PT - "Virtual In-stanity"
Stan uses an avatar of a hot girl to bond with Steve; Roger plots a violent end for frat brothers who stiffed him out of $20 for a limousine ride.

"A great example of why everyone adores Roger.  He goes on a murderous rampage over $20 and, by the end, you still can’t help but say, “I love that nutty alien.”

7:00PM ET/PT - "The Unincludeds"
Steve and Snot alter their futures when they throw a party for the uncool kids. Meanwhile, Roger is disgruntled when a waitress doesn't compliment his order and Stan and Francine go on vacation in Bosnia.

"Of all the Steve and his friends shows we’ve done, this party-throwing, time-traveling, egg-throwing, animal-morphing story tells the classic tale of sacriﬁce through nakedness."

7:30PM ET/PT - "The Two Hundred"
Stan, tattooed and haunted, travels a barren Langley Falls alone. Meanwhile, a mysterious element known as The Two Hundred has reigned terror on the town and separated Stan from his family.

"Our 200th episode.  To all you aspiring writers out there, this is what can happen when a story starts out with “What if Stan gets a tattoo?” Go!"

8:00PM ET/PT - "Criss-Cross Applesauce: The Ballad of Billy Jesusworth"
When Roger breaks his ankle, Francine convinces Stan to let him play in his basketball league. Meanwhile, Steve sings a song that parodies R. Kelley's "Trapped in the Closet."

"Steve singing an entire B-story is just too good to pass up.  Scott wasn’t sure he could pull it oﬀ.  Wrong again, Scott. Wrong again."

8:30PM ET/PT - "Persona Assistant"
In the show's 250th episode, Stan has to take over Roger’s different personas after a tumor takes him out of commission. Principal Lewis pressures Steve and the school choir to do whatever it takes to win.

"This recent episode took advantage of the world we had created with Roger’s many characters and the value he/they served the world at large.  Plus, it gave birth to our own Cousin Oliver… Rogu."

9:00PM ET/PT - "Legend of Old Ulysses"
Steve gets competitive during the father-son events at Possum Lake. Roger learns how to ride a bike.

"The opening song sequence is so great looking with that fun Monty Python-esque way. The randomness of Python has always had a strong - SPAM! - inﬂuence on American Dad!."

9:30PM ET/PT - "Rabbit Ears"
Stan gets obsessed with a 1960’s television show after picking up a secondhand TV. Roger decides to live as a baby and the family cares for him.