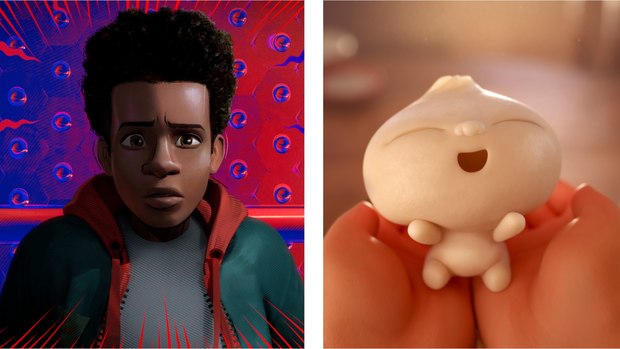 “You know, collaborating with Rachel Morrison, Ruth Carter, Jay Hart, my set decorator, I mean, that's just how you make films: You collaborate,” production designer Hannah Beachler commented backstage following her award for Black Panther. “It's a collaborative medium in the way that we do it, because we're all visual, and we all… bring that to the table.”

“Thank you, Sony,” said Christopher Miller in accepting the award for Best Animated Feature for Spider-Man: Into the Spider-Verse. “We share this with our fellow producers, cast, crew. There’s 800 filmmakers who pushed boundaries and took risks to make people feel powerful and seen.” Phil Lord added: “So when we hear that somebody’s kid was watching the movie and turned to them and said, ‘He looks like me.’ Or, ‘They speak Spanish like us,’ we feel like we already won.”

“To our audience, thank you so much,” continued Peter Ramsey. “We love you and we just want you all to know we see you, you’re powerful. This world needs you, okay, this world needs you. So please, we’re all counting on you. Thank you.”

“Oh my gosh. Thank you to the Academy and thank you to my fellow nominees,” Bao director Domee Shi said in accepting the award. “Thank you for supporting shorts. To all of the nerdy girls out there who hide behind their sketchbooks, don’t be afraid to tell your story to the world. You’re going to freak people out, but you’ll probably connect with them too, and that’s an amazing feeling to have. Thank you to Pete Docter for believing in my weirdness and giving me a voice at the studio. And thank you of course to my mom and my dad, my muses, and my partner Darren, for being with me through all of this and being my human stress ball. Thank you.”

“We want to thank the entire Bao crew,” added Bao producer Becky Neiman-Cobb. “They brought their heart to this short and you can see it in every shot. To everyone at Pixar, you inspire us every day. Disney, for believing in us. To my friends and family, parents and sister, I love you so much. I got to make a short, help make a short that was about a mother just as I was becoming one. So, to my little ‘bao’ Lucy and to DeAnn, none of this would be possible without you. I love you.”

“What a truly magnificent moment,” said VFX supervisor Paul Lambert in accepting the award for First Man. “We did things a little bit differently on First Man and being recognized by the Academy is all the more special. Thanks goes to my visual effects producer Kevin Elam, also Jennifer Bell and Bill Tlusty at Universal. Thank you to the inspirational Damien Chazelle and our amazing cast and all the incredible heads of department: Linus, Tom, Justin, Mildred, Ai-Ling, Nathan, Rose, Ian, Josh, Mary, and Donald who made this film so, so memorable. And a big shout out to Michelle Eisenreich, Reuben Poulter and my people at DNEG Vancouver.”

See the full list of nominees and winners for the 91st Academy Awards below: