Dystopian drama employing 2D, 3D and stop-motion animation has screened at more than 120 festivals around the world, winning 31 awards including the Cristal for a graduation film at Annecy 2017. 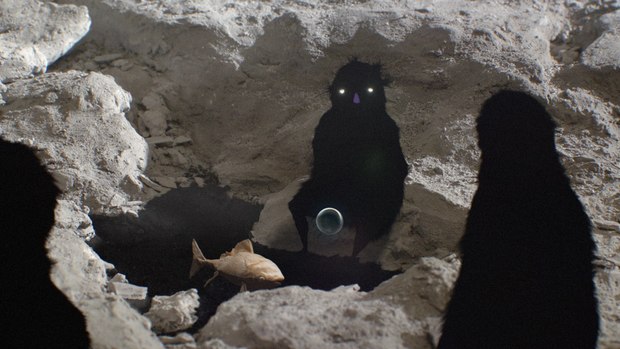 Jonatan Schwenk has released his very excellent dystopian drama Sog online, along with a making-of video that shows how the short film was brought to life. Employing 2D, 3D and stop-motion animation, Sog depicts the “cruel efforts” of a band of humanlike creatures who lash out viciously against a shoal of fish that had unintentionally entered their desolated land. The fish become stuck in the dead trees that populate the landscape following a flood; in danger of drying out, the fish scream out sharply. Meanwhile, the inhabitants of a nearby cave, woken by the noise, don‘t feel happy at all about the unintended gathering…

Running just a little over 10 minutes, the short film has screened in 38 countries at more than 120 festivals, including Annecy, where it won the Cristal for a graduation film; Stuttgart, where it was crowned best student film; and the Encounters festival, where it received the European Animation Award. Racking up a total of 31 awards and eight honorable mentions, Sog was also selected to screen at KLIK!, SXSW, OIAF and Anima Mundi, among others.

An independent filmmaker and animator, Schwenk was born in Germany in 1987, and is currently based in Kassel and Berlin, where he studies visual communication at the University of Art and Design in Offenbach and is guest student at the Kunsthochschule Kassel. His previous short film, Maison Sonore (2011) screened in competition at Annecy in 2012, and he also provided sound design for Merlin Flügel’s short film Echo, which had its world premiere at the 63rd Berlinale in 2013. Schwenk also animated the stop-motion sequences for the animated short The Old Man and The Bird (directed by Dennis Stein-Schomburg), which was an official selection at the Berlinale in 2015.

Sog is now available to watch online as a Vimeo Staff Pick in all its glorious screeching chaos. Watch the full short and making-of video below: