Showrunners Mike McMahan and Josh Bycel discuss the secrets of edgy joke writing, the specialness of family – even for Shlorpians - and what to look forward to in the third season of their alien-centric, Middle America-set animated sitcom, now streaming on Hulu. 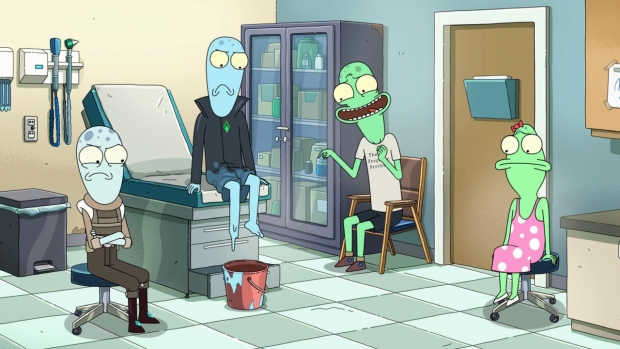 Since its premiere in May of 2020, the adult animated sitcom Solar Opposites has proven once again that aliens and sitcoms go together like matter-antimatter reactors and dilithium crystals, as well as made a compelling case that anyone who harbors hopes for some kind of idyllic future rapprochement between humans and extraterrestrials is clearly barking up the wrong Wall.

The brainchild of Rick and Morty co-creator Justin Roiland and Mike McMahan, creator of Star Trek: Lower Decks, Solar Opposites follows the crash-landed Shlorpian family as they negotiate the variegated charms of Middle America, with often raucous and chaotic results. Oh, and they also keep a bunch of miniaturized humans imprisoned in a wall-size terrarium, where many amusing things happen.

Boasting ratings of 92% and 100% on Rotten Tomatoes for Seasons 1 and 2, respectively, Solar Opposites launched its third season this past Wednesday, July 13, on Hulu. And here to tell us all about it are co-creator, co-showrunner, and executive producer McMahan and writer/co-showrunner Josh Bycel. AWN: What can you share about the new season? Were there things you were able to achieve this season that you hadn't been able to do before?

Mike McMahan: What I would say about this season is we've become more confident of our show in every way. We know what we love about our alien family, and now our goal is to take them from being a team and make them a family, without losing any of the fun. The more heart we give these characters, the more you like watching them do crazy stuff, because you know that at the end of the day, they care for each other.

We've also done our biggest, coolest wall stuff this season. It's a transitional season where you're going to see some of these characters and storylines culminate, while we're also gestating and germinating seeds of stories that have been there the entire time since Season 1. [Spoiler alert!] At the end of the season, you see that Sherry has miscalculated who her enemy is in the Wall. And that the church that has been there gaining power the entire time grows into an unassailable theocracy that she's going to have to contend with in Season 4. [Bringing on] Sutton Foster as the evil high priestess who is causing this to happen is such a fun bit of casting because she's so sweet in everything else. Her playing a villain is just a riot.

We started a whole other story called “Silver Cops” that takes place in outer space and becomes a multi-season arc. We built out the background of the main characters in an episode that happens in the middle of the season, which explains more about and shows you some of the things they've been talking about – including how the pupa terraforms, if everything goes well. We show what happened to the other Shlorpian ships that left the planet. By the end of the season, our lead alien characters have more of a loving, familial relationship than they've ever had, along with bigger, crazier, funnier, serialized stories. AWN: The Wall is just brilliant, and it just gets funnier as time goes on. I have to ask – who came up with the idea?

MM: I'd love to take full credit for that, but it was really a group effort. When Justin and I were first pitching the show and thought it was going to be on Fox, we assumed that we would do the Wall a little bit at a time, sort of like how The Simpsons does “Itchy and Scratchy” every once in a while. The, when we went to Hulu, we both were like, "We want the Wall to be a big part of the show." Justin really loved the idea that, since we were going to be binged, and people were going to see every episode, we could do a serialized element.

On Rick and Morty, I was the sci-fi guy and people would be like, "Well, McMahan, do you have a dumb sci-fi pitch for this?" The Wall was my dream sci-fi thing that would take over the show. It was purposefully disrupting the balance of what could be comedy and what could be drama.

I really wanted to do an epic Mad Max, Game of Thrones, War of the Roses story with little people. Justin wanted to do a "let's talk about the world as seen through the lens of the Wall" thing. It just got better when smarter, funnier writers than me started working on it. Then the artists made it look visually beautiful in Justin's goofy style. It started from the right place, but this amazing team made it the best it could be. AWN: You have a great group of writers and your jokes hit such a high percentage of the time. What’s your writing process like?

Josh Bycel: My background is on shows like Happy Endings and Scrubs and American Dad! I really love jokes and I feel like there's so many comedies that don't have any comedy in them anymore. First of all, jokes can't just be in a vacuum. They have to have character to them. Something we really worked on from the beginning was for all of our characters to have incredibly distinct voices. Also, we really craft the story and all its insanities first – it's heavily broken out. There are huge boards with different colors for all the different storylines. Then we really spend a lot of time hitting every joke. For every joke you see, there were 10 alternates that were probably just as funny. One of the last things we do is the big joke pass, in which the whole staff participates. One of the great things about our show is that our staff can look at every episode and feel like they put something into it.

MM: We try to work with people who are funnier and smarter than we are. The artists are really funny and they speak a visual language of comedy that often is funnier than what we could say.

And, because we have an improvisational bent, we can let the voice actors go nuts for a while and, if they say something funnier, we get that in there. Let's make it the most funny it can be. MM: It's because the aliens are sincere and they're naïve, and they're us at our best, and they're us when we don't know what's going on. They are enthusiastic, they're friendly. They get in squabbles and they cause problems, but they're never doing it out of malice. We're chasing something that's funny, but we're not looking to be edgy or cool. We're looking to talk about things that are personal to us and everybody who is writing and animating and voice acting on Solar Opposites. We're trying to make a show for people who love making TV and watching movies. This is a show where I can have an alien bring up the movie Existenz because he's watching movies on the side.

JB: For comedy writers, sincerity is hard. It's hard to be nice. But TV's something you invite into your home. You're not going to a movie theater to watch it. You're not watching it with a crowd. I believe that television should challenge you occasionally in a surprising way. But what it really has to be is part of your family.

MM: We get some cheap yucks. We've got an episode where we kill like 50 aliens with T. Rexes. But we really do care about these characters. Occasionally we can go blue. Our language is salty as hell. I can't even let my son in to watch it. I'll be editing an episode and I'm like, "I'm going to close the door now." But you can love somebody who has a dirty mouth. You can like stupid stuff. TV shows so often tell you, this is how it's supposed to be. In Solar, it's like, everything is chaotic and that's fine. AWN: The show continues to look fantastic. Is there anything new in terms of production that you’re doing in Season 3?

MM: Making the third season, the artists no longer have to be told what the Wall is. We don't have to explain our thinking and they get to be creative. Sometimes half the episode is a sitcom  and the other half has to feel like a high drama. Sometimes we need to look like an Oscar-winning movie, and then we have to switch back into the goofiest animation style. Our character designers have to use so many parts of their creativity and their brain and their time to land a complex thing and make it seem effortless. They fucking kill it. Our supervising director, Anthony Chun, and everybody working on our team is so good at what they do, and loves the show so much, that we'll write a scene and they'll give us something back that I'm like, "Wow, I didn't even know it could look that good.”