EPs Peter Hastings and Shaunt Nigoghossian take the Dragon Master to new lands, meeting new friends and foes, on a quest for redemption… while having even more awesome fun, in the new DreamWorks Animation series, premiering today on Netflix. 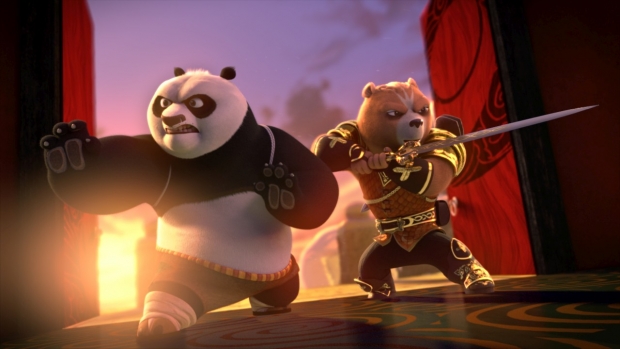 Even after three movies, two TV series, four short films, and six video games, Kung Fu Panda fans keep clamoring for more, and DreamWorks Animation is more than happy to deliver. Jack Black is back as Po in Kung Fu Panda: The Dragon Knight, the newest addition to the CG comedy-action franchise. The 11-episode series premieres today on Netflix, taking the Dragon Master on brand new adventures, but with a nostalgic arc.

“A lot of it was also about returning to some of the great elements that are in the first movie, which is watching Poe kind of go from zero to hero,” says executive producer Peter Hastings, who previously worked as a producer on Kung Fu Panda: Legends of Awesomeness. “The approach for this one was, ‘How can we take Po down a little bit and get him to have to work a little bit harder from being a celebrity master and watch him struggle?’ because he's just so good at that – wanting to please, wanting to learn, being enthusiastic, having fun doing all that sort of stuff. It was what I wanted to see. Then the road trip element, and bringing in this character from another country, is the big twist.”

Produced with Pearl Studio, DreamWorks Animation’s series begins with revered Dragon Master Po (Black) attempting to stop a pair of weasels who have set their sights on a collection of four powerful weapons. When Po not only fails to catch weasels Veruca (Della Saba) and Klaus (Chris Geere) the first time around, but also destroys a village in the process, his hard-earned reputation takes a nosedive.

Take a moment to check out the trailer:

Leaving the comfort of Panda Village on a globe-trotting quest for redemption and justice, Po finds himself partnered up with a no-nonsense English Knight named Wandering Blade (Rita Ora). Together, these two mismatched warriors will set out to stop the magical weapons from ever being used.

“The first film is not just a fun, animated movie, it's a really, really strong film and, honestly, it's really as simple as we have a great lead character, and we need to do some more with this guy,” says Hastings. “Po is just such a great character, and you can go back to the well and tell all kinds of stories when you have a really strong lead character. Every time a movie ends, or a series ends, it's like, ‘What else can we do with this guy?’ because he's just super fun. With this one, we wanted to do something a little different and really get him in this almost buddy cop, road picture, and team him up with a character who is very opposite from him.”

Shaunt Nigoghossian, another executive producer on the show known for his directorial work on Blood of Zeus, adds, “Wandering Blade, she's very rigid — she sits rigid, fights rigid, everything she does is rigid. So, Wandering Blade has to fight with a very rigid sort of knight style. Whereas Po does his kung fu thing, but he's also cartoony, so he's bouncy and kind of plays in both worlds.” Nigoghossian says the team really “went for the moon” with this series, not only in story, but also in visuals, a huge staple of Kung Fu Panda’s legendary awesomeness (wordplay intended).

“We wanted to borrow from what we loved about the established style of Kung Fu Panda that has these really hard beams of light and shadow,” explains Nigoghossian. “We wanted to make a high-level Netflix series, and when we designed specific things, like Wandering Blade’s sword, we were designing all the nicks and cracks on every little bit of that sword so that it would catch the light. And we've also come up with a good lighting system that really ups our show’s ante quite a bit. We really get in close, and you can see every hair and every eye glow on these characters. Our team did a killer job. It's beautiful.”

Hastings adds, “We really went crazy with the detail and texture. I mean, [Wandering Blade’s] sword looks beautiful, and it also has that wornness to it. It's uneven. But, as I say, it’s the imperfections that make something perfect, which is something CG is just so good at doing.”

As the team expands the universe of Kung Fu Panda through Po and Wandering Blade’s travels to foil the conniving weasels’ schemes, the series also expands the franchise’s weapons arsenal, showcasing swords, knives, whips, and accouterment that have not been seen on any other TV show or film. “You can have all these logical reasons about why a weapon should be like this, or like that, but ultimately, you want something where you just look at it and are like, ‘Oh, that's cool,’” says Hastings. “It’s really fun designing a weapon to the point where you have an emotional reaction to it.”

“Veruca and Klaus are weasels in both physicality and personality, so we wanted them to be snaky, where they can spin around and twist,” Nigoghossian adds. “And they’re thieves, so they use their tails to steal things. With all that in mind, we had to design their clothes so that they can do all of this stuff.”

But as much as sensibility factored into the design, “coolness” was always right there at the top of the list of considerations as well.

Nigoghossian continues, “We definitely had some fun with it. There's a character that comes in who has hooves for feet, but we gave them little leather boots. And every once in a while we cut to a shot of just these leather boots and it makes me giggle every time. With the way that we've designed everything, and even the way that we design the fight scenes, the goal was to take it up a notch and make it really cool, but also bring in the funny as well.” The physical comedy within the martial arts moves and combat actions of the characters was one of the team’s biggest challenges, but also one of Kung Fu Panda’s – or, at least Po’s – most defining traits that they had to get right.

“He's got a Jackie Chan thing going on,” says Nigoghossian. “There’s always a prop that has to be kept up, and then [Po] has to throw it and then fight, fight, fight, and catch it. In the first movie, they're fighting over the dumpling for like five minutes, which is just great. In the second episode [of our show], they're on this rope and [Po’s] holding the rope, but he's also fighting these guys while [Wandering Blade] is on the rope fighting guys.”

And though Hastings worked with consultants for Legends of Awesomeness, he says that they’ve found the best way to deal with the complications of scenes like the one Nigoghossian mentioned is to take the same approach they do with weapon and costume design – just have fun with it.

“On Legends of Awesomeness, we brought a guy in and he showed us a lot of moves,” remembers Hastings. “But, you know, a bear can’t actually do three flips, but we can make it happen, and did make it happen, because we're animating. So, we actually found ourselves less and less reliant on the authenticity of having a consultant. We left it more to our imaginations.”

He adds, “We were aiming really high. It creates a lot of struggles and difficulties and pressure in every aspect of the show, but we're just always pushing up against the wall to really make the best show that we can, and I was constantly surprised and pleased with how things turned out. For fans of both Kung Fu Panda and those with an affinity for art and design, Hastings and Nigoghossian encourage viewers to look out for The Dragon Knight’s 2D sequences, interspersed throughout the CG show.

“We have these 2D sequences when we’re talking about a flashback, story, or the history of something,” explains Hastings. “These are in every Kung Fu Panda show and a convention established in the first movie as well. And these sequences are animated and drawn specific to whoever is narrating. Our design team just went nuts and did such a great job.”

Nigoghossian concurs, noting, “When someone British is telling the story, it’s told in an illuminated manuscript style, like the old paintings with gold foil. And then when someone else is telling a story from a different land or something like that, we actually go into hieroglyphics to tell a story totally differently.”

Both producers encourage fans to watch the show a couple times over, to take in all the care and detail added into every scene of the show. “Enjoy the high level of detail and the care that went into all the design,” says Hastings. “It’s going to be evident, and it changes in almost every single episode. So, there's always something new to look at and something new to discover.”