The creator and executive producer of Adult Swim’s acclaimed animated avian sitcom talks about metaphorical trees, lost ideas, generational feminism, and the making of a hit series uniquely resurrected after its one and done at Netflix. 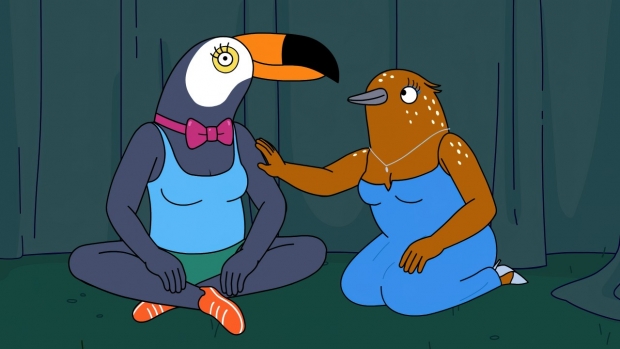 If a robin heralds the arrival of Spring, then the reappearance of a raucous toucan and a flighty songbird must mean it’s time for a new season of Tuca & Bertie!

"I can't wait for everyone to catch up on all the latest calamity and soul-searching from these birds," says noted ornithologist, series creator and executive producer Lisa Hanawalt, whose distinctive style first came to public prominence in the Emmy Award-winning, late lamented BoJack Horseman. "Season 3 is packed with romance, chronic pain, ambition, large ducks, lustful trees, and hungry snakes!”

For those whose birdwatching activity in the past few years has been limited to tufted titmice and great-tailed grackles, Tuca & Bertie chronicles the friendship between two 30-something female avians (Tiffany Haddish and Ali Wong), whose day-to-day dilemmas and madcap misadventures sometimes bear a striking resemblance to the kinds of life problems encountered by millennials of all species.

As indicated above, Season 3, which debuted July 10 on Adult Swim, appears to have all of the ingredients (chronic pain! large ducks!) required to produce a truly memorable viewing experience. Just to make sure, though, we tracked down Hanawalt and forced her to reveal more details of what the new season is all about. AWN: What else can you share about the new season? I hear there’s trees.

Lisa Hanawalt: We have some new characters I'm really excited about. Tuca has a new love interest, and we really spent a lot of time deciding what he was going to be and what his deal was. Then, suddenly, one night when I was lying in bed, it suddenly came to me that he should be a tree. The analogy works well as a way of exploring how we are with new people in a new relationship sometimes. There's some inner rot that we need to uncover and deal with or not deal with.

Bertie has a new mentor, chef Winter Garcia [played by Justina Machado]. Because of Bertie's past experiences with bosses and mentors, we aren't sure about whether we should trust her or not, but I really like that character, and her combination of warmth and sternness are interesting to me. We also have an episode focusing more on Speckle. People love Speckle. A lot of the season is setting up more interesting stories for our characters and just following things that I'm interested in.

AWN: Is there anything in the new season that you had always wanted to do that you finally were able to get to the screen?

LH: We have a flashback episode where we see Bertie in high school, and there's a story in there that I'd always wanted to find a way to write, and just didn't quite know how. Then this season, there was an opportunity for it to come together. I came up with the idea of her relationship with Winter Garcia years ago, so it was funny when I saw Hacks, and I was like, oh, this is exploring some similar territory, but coming at it from a different angle. It's a really juicy subject for me – a younger millennial worker and her older female boss, and their different approaches to feminism – and there's a lot there that I've been wanting to write about for a while and finally had a chance. A lot of stuff this season is ideas I had on the back burner that just didn't quite fit into the puzzle of earlier seasons. AWN: Is that a normal part of your development process – that things percolate for a while? Or does most stuff come together relatively quickly? And as a production designer, do you initially think more visually, or verbally, when you’re working on ideas for the show?

LH: I think in a hybrid of visual and verbal, so sometimes I'll think of words that I want to put together, or a story tidbit, or just a line that I find funny. Sometimes I'll think of a visual and it goes into my Evernote or a notebook, or it gets scribbled onto a napkin. Then later I scramble to dig it back up and find it. Sometimes I'll write the same idea five different ways in five different places, and then later, when I'm looking through my notes, I'm like a crazed detective connecting things with yarn on the wall and not remembering why I wrote what I wrote. It's always that thing where you're about to fall asleep and you get an idea and you're like, ahh, I don't want to get up to get my notebook. Surely, I will remember this – and then I never, ever do.

LH: Never. Not once have I remembered it. But when I do write it down, it is often helpful or turns into something later, even if the original germ of an idea wasn't anything. I like to use a food analogy – sometimes something you make can be eaten right away, it's a quick microwave meal, and sometimes it needs to go back in the oven, it's not done yet.

AWN: It has to bake more.

LH: Right. It's a half-baked thing. I’ll take a drawing out of the flat file, or I’ll take a block of text out of my Evernote, and I’ll look at it and think, is this something? Is this ready? Or is this an ingredient that goes into something else? Or is this just nothing yet? I do have ideas that I've kicked around for years and years, and maybe they're just bad because they haven't found a home yet, but it is always satisfying when I find a spot for them. AWN: You spent years as a production designer and producer on BoJack Horseman. How did you decide to make the jump to being a creator with Tuca & Bertie?

LH: I think part of it was me already being a creator in my own right. I had my own comic books. I had a lot of other stuff going on, aside from BoJack. And I had – I'll call it a playful frustration –  with [BoJack creator] Raphael [Bob-Waksberg], where I would  troll him with stuff I wanted to do on BoJack – walking, talking plant people is the best example – and he'd be like, no, that's not part of this world. But then the other part of it was Raphael and Noel [Bright] and Steve [A. Cohen], my producers at Tornante, believing in me and saying, “Hey, do you have an idea for a show? If you do, we would love to work on it with you.” And I was like, me? Okay. I love this character of Tuca. I want to do something with her. She feels like the most natural character to deepen with a show of her own. And we just started talking about it.

I did not go into it thinking I had the skill set needed to make and run my own TV show at all, but Raphael gave me a lot of support and a lot of confidence. He was like, you could write it. You don't need to be paired with a writer. He helped break the first episode with me. He really mentored me through that process. It was hard going into it under the shadow of BoJack, with people saying, “This looks like BoJack, but it's not BoJack at all,” and me trying to explain that it's a different thing entirely. It was difficult, but I think the more seasons of Tuca & Bertie we do, the more it becomes clear the ways that it's different. AWN: The show was a success right out of the gate and then, out of the blue, Netflix cancelled it. Critics and fans were incensed. And then, in a true rarity, you got picked up by Adult Swim, not just for a second season, but now for a third.

LH: It was a wild, just a roller-coaster year. The show coming out and us feeling so excited about it. Everyone who worked on it, everyone who saw it was really into it, and it got really good reviews and really good feedback. And then just silence. Then us making them tell us what was happening, and me having to keep that news to myself for a very long time, before we let the public know. Then, learning that other networks were interested in it was very up and down for me emotionally, because it was like, my show's in the hospital. Is it going to live? I'm very emotionally and personally attached to projects I work on, so us being able to go to Adult Swim really was the best-case scenario and the best possible luck.

AWN: I know you haven't changed your production company, but have you changed the way that you make the show at all?

LH: The third season is definitely not different from Season 2, as far as the pipeline. Both were made in pandemic circumstances, so that's been odd, everything's been remote. This season we did do a couple of stop-motiony shoots in person in the office, all masked up. It was hard work for the team, but it was nice to see some of my team members in person again. I'd really missed that, even though overall I like working from home. I would love to be able to pop into an office once or twice a month. I love the camaraderie and I really just like the people that I work with. AWN: There’s obviously a family resemblance between the characters on Tuca & Bertie and those on BoJack. How involved are you in the production design for your show?

LH: I really have to credit Alison Dubois, who's the art director on Tuca & Bertie, with that, because she took the things that I did on BoJack and really improved the pipeline and the process and the look. She accomplished with Tuca & Bertie what I'd always wanted, but didn't have the skill for, on BoJack. It looks artsy, painterly, the lines are not just straight computer lines. It has a hand-drawn look to it that is really hard to accomplish with Flash animation and digital processes.

Alison's really good at making sure that all the layers go together – the background painting, then the characters on top of that and how they're interacting with the background, and the comp and lighting passes on everything, and her color choices – it's Alison, Alison, Alison. It's incredible, and it makes my job so much easier. She just takes something and runs with it and makes sure that it works.

AWN: Last question: What do you enjoy most about animation as a storytelling medium?

LH: I just like the endless creativity of it. I don't have a lot of experience with live-action, so maybe there’s more tweaking you can do there than I think, but with animation, you can add things until the very last minute, and change the expression of a character to change the interpretation of a line, or add a gag. Sometimes I'm watching something for the 10th time and I think, oh, there's a funny visual idea here that we haven’t shown, and we can plop a pop-up here in this little space and show what our stupid idea is, and that's really fun. You can layer stuff on top of other stuff up until the very last moment. You can use so many different mediums. As I mentioned, we have stop-motion sequences, and I've done hand-drawn sequences. I love how open it is to everything.